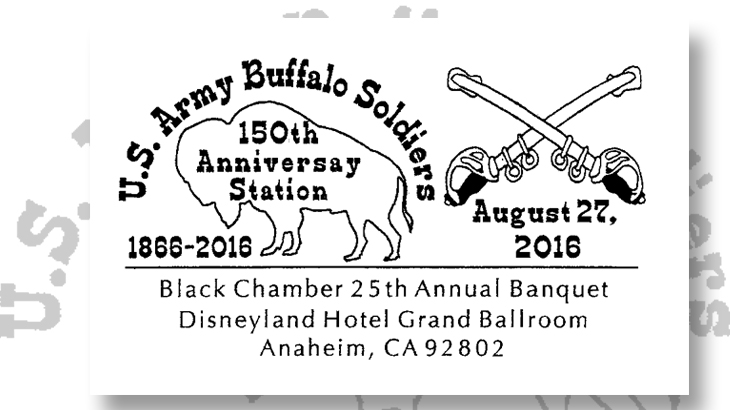 The 150th anniversary of the formation of the first Buffalo Soldiers regiment is being commemorated with an Aug. 27 pictorial postmark.

Before the stamp was issued, the USPS Postal Bulletin of April 14, 1994, described the history of the Buffalo Soldiers.

“In 1866, after the Civil War, Congress authorized the formation of six black regiments — two cavalry (9th and 10th) and four infantry (38th, 39th, 40th, and 41st). The infantry units were later consolidated and redesignated as the 24th and 25th Infantries.

“These soldiers became known as the Buffalo Soldiers.

“Over several decades, Buffalo Soldiers served in forts throughout the United States, including Arizona, California, Kansas, Louisiana, Montana, Nebraska, New York, Oklahoma, Texas, Utah, Vermont, and Virginia. They endured bitter hardships and often received inferior food, equipment, and horses. However, they received the highest number (18) of Congressional Medals of Honor and had the lowest desertion rate of any Army unit from 1867 to 1898.”

The 150th anniversary of the formation of the Buffalo Soldiers is being commemorated with an Aug. 27 postmark from Anaheim, Calif., sponsored by the Orange County Black Chamber of Commerce.

The pictorial postmark shows the buffalo crest and crossed swords associated with these honored soldiers.

To obtain the cancel, send your request to:

National Lighthouse Day: There’s a postmark for that