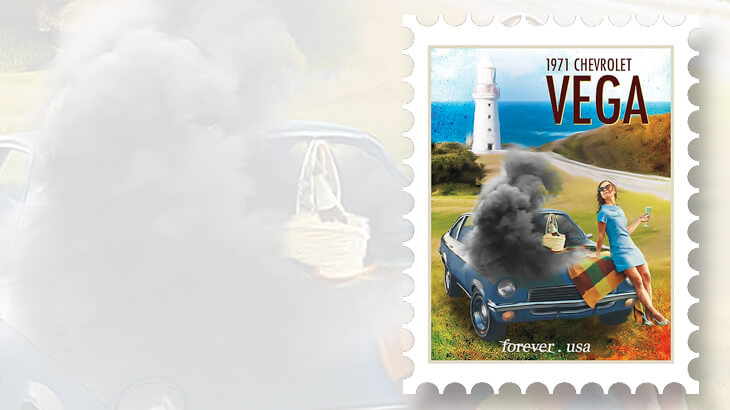 Car Talk host Ray Magliozzi recently had some fun showing off seven stamp designs for clunker cars created by BestRide.com. Shown is the design for the 1971 Chevrolet Vega. Image courtesy of BestRide.com.

When one of National Public Radio’s funniest performers learned that the United States Postal Service was about to issue a set of automotive stamps, what would you expect him to do?

Make a joke. Seven of them.

That’s just what Ray Magliozzi of Car Talk fame did when he learned about the set of four Pickup Trucks commemorative forever stamps issued July 15.

“Some real beauties,” he mused in a newspaper column.

“But that got us thinking shouldn’t there be stamps for the vehicles that you and I actually had to drive?

“Shouldn’t there be a set of stamps for cars on whose dashboards we’ve pounded our fists in frustration?”

The result, designed by Magliozzi’s “pals” at the BestRide website, is a set of seven faux stamps. All honor cars that Magliozzi says “probably should’ve been canceled by their manufacturer.”

2001 Pontiac Aztek: a nominee for “ugliest automobile ever produced.”

1971 Chevy Vega: a car that one reviewer said had “slothful performance, woeful reliability” … and “the permanent falling-apart-at-the seams appearance of an abandoned shack.”

1995 Ford Explorer: A vehicle with a high center of gravity and tires “prone to exploding at random.”

1960 Chevrolet Corvair: A car “synonymous with ‘automotive scandal’’’ and one that “singlehandedly shook America’s faith in car companies.”

1986 Audi 5000: A model that showed a “willingness to take off on its own, usually through the garage door.”

1988 Suzuki Samurai: a car that “looked like a third generation Xerox copy of the Jeep with the added ability to end up on its roof at any given moment.”

1971 Ford Pinto: This car “wasn’t too bad. It only exploded when its rear bumper came in contact with other cars, leaves or a light breeze.”

For 25 years Ray Magliozzi and his brother, Tom, presided over NPR’s weekly Car Talk show, offering wry advice about cars and how to fix them.

They were the Tappet Brothers, Click and Clack, and their show became one of NPR’s most popular.

Tom died in 2014, but reruns of their programs still air on many stations.

The extreme conditions of the many cars on which they opined may account for the dire condition of the models on the BestRide stamp list.

“Cars in need of repair, on fire, scratched, dented, ugly, with Cheerios stomped into the carpet. These are America’s real cars.”

But he also conceded that if any of the faux stamps were used on a letter that “would virtually assure it would never reach its destination.”

The collection can be viewed in full color at BestRide.

Which classic American pickup trucks are getting stamps?