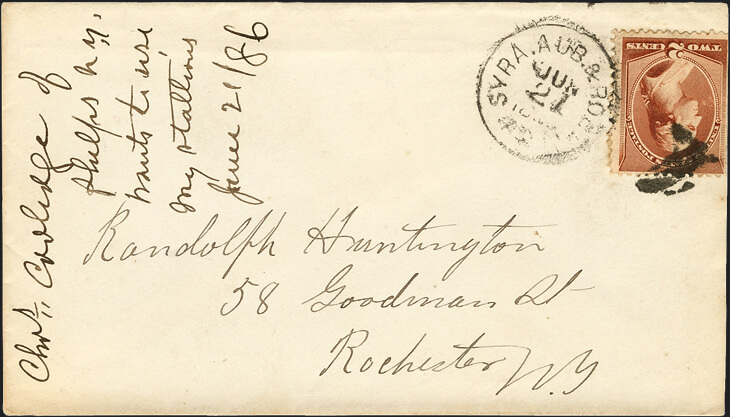 What turned out to be a philatelic wild goose chase yielded interesting data about a prior American Philatelic Society president, but a different person than the Charles Coolidge named on this 1886 2¢ red-brown cover.

Well, I thought I’d caught life in the act of rhyming when the 1886 cover shown nearby came my way.

Thanks to the Internet and APS Research Library director Tara Murray, information about life and philatelic activities of Coolidge, the APS president, was found.

He remained in the Army after the war and was posted to the Western frontier. In the 1870s, he was wounded in action during the Indian wars.

During his Army career, Coolidge continued to collect stamps.

He served in Cuba during the Spanish-American War, then in the Philippines in action against Emilio Aguinaldo, and was later sent to China during the Boxer Rebellion.

Retiring from the Army in 1903 after 40 years of service, Coolidge settled in San Francisco. In the earthquake and fire that destroyed much of the city in 1906, he lost his personal possessions and much of his stamp collection.

Coolidge then moved to Detroit where he lived until his death in 1926.

Among his philatelic credits was the presidency of the International Precancel Club. A contemporary article in the New England Philatelist notes with rather curious wording that Coolidge’s collection is “probably unequaled by very few.”

He was briefly president of the Detroit Philatelic Society, was associate editor of Everybody’s Philatelist from 1910 to 1914, and served as a vice president of the APS from 1911 to 1913. At that time, total membership in the APS was about 1,500.

While all of this information is interesting, the result of the research is a finding that the then Capt. Coolidge was assigned in Montana, Dakota Territory, Wyoming, and Colorado between 1877 and 1898.

Thus, it appears to be a different Charles Coolidge who is referred to by the docketing on the 1886 cover. As the great Satchel Paige used to say, “You win a few. You lose a few. Some get rained out.“