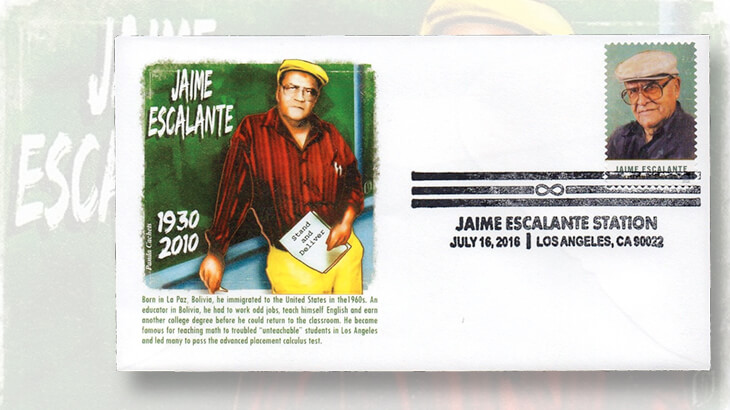 It was not the first-day site, but the Claude C. Ries Chapter of the AFDCS, in the Los Angeles area where Escalante taught, arranged for a special postmark for cacheted covers with the new stamp. 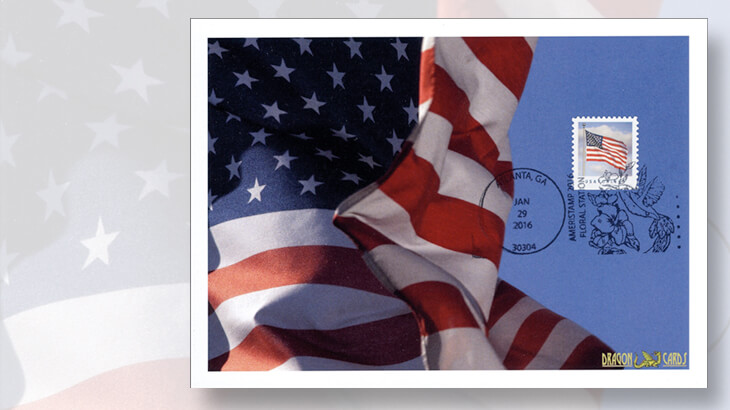 Four new Flag forever stamps were issued without a ceremony in Washington, D.C. on Jan. 29. The American Philatelic Society obtained the stamps for its winter show, Ameristamp Expo, allowing collectors to create their own collectibles.
Previous
Next

Take a look at the Linn’s U.S. Stamp Program.

What is missing from the listings are first-day ceremonies at the country’s major stamp shows, other than World Stamp Show-NY 2016 and three perennials: the American Philatelic Society’s Ameristamp Expo in January, APS Stampshow in August and the American Stamp Dealers Association’s Fall Postage Stamp Show in New York in October.

The United States Postal Service announced the Patriotic Spiral forever stamp in a booklet of 10 for consumers will be issued in Falls Church, Va., on Aug. 19. Americover 2016, the annual show of the American First Day Cover Society, is taking place in Falls Church Aug. 19-21, but the show wasn’t mentioned in the USPS press release.

The Patriotic Spiral stamp first day of issue at Americover 2016 was the result of persistent campaigning behind the scenes by first-day collecting enthusiasts. The stamp also will be issued in a coil of 10,000 for businesses on the same day without a ceremony and with a Kansas City postmark.

The U.S. Postal Service has agreements to issue stamps at APS Stampshow and the ASDA New York show. The APS summer show usually gets an interesting new issue and whatever mail-use stamps are coming out around that time. In recent years, the annual holiday stamps have become first-day staples for the ASDA fall show.

However, there were opportunities for new-issue launches at other stamp shows this year, and the USPS chose to skip them.

On the opening day of Ameristamp Expo 2016, Jan. 29, the USPS issued the 10 Botanical Art forever stamps at the show, but gave a set of four new U.S. Flag forever stamps a quiet, no-ceremony release in Washington, D.C., that same day.

Former Linn’s senior editor Jay Bigalke, now editor of the American Philatelist and APS media manager, did take pains to make sure every format of the new Flag stamp was available that day at Ameristamp Expo, and collectors took advantage of that by creating covers with the show’s postal station cancel.

The nondenominated (89¢) Henry James stamp, the new 3-ounce-rate entry in the Literary Arts series, was issued July 31 without a ceremony in Dulles, Va., a site that not only lacks a connection to the author being honored, but didn’t even exist during his lifetime, being an unincorporated area around Dulles International Airport since its construction in the late 1950s.

Americover, the World Series of Philately show, is taking place in Falls Church, about 14 miles away from Dulles.

Was there such a desperate need for a 3-ounce-rate stamp that its release couldn’t wait for Americover?

Even stranger, the issue date for the Henry James stamp is on a Sunday, when no post offices in the immediate area are open, and the date has no significant connection to James’ life.

This year, even APS Stampshow appears to be getting somewhat short shrift.

The Portland, Ore., show is the rather puzzling host of a set of four Songbirds in Snow forever stamps, in August, in a city that gets about three inches of snow a year.

Apparently, the postal cupboard was bare of other potential new issues for Stampshow.

There is no question the USPS is going to try to place high-profile issues, such as the Star Trek and Wonder Woman stamps, at major non-philatelic events (Star Trek Mission: New York, on Sept. 2, and New York Comic-Con on Oct. 7, respectively) in the hopes of garnering extra attention for itself and for stamps — mostly the former. While stamp collectors might wish otherwise, this is probably sound thinking on the Postal Service’s part.

However, the Postal Service likely could sell more stamps if some additional consideration were given to collectors and shows.

For example, the Jaime Escalante forever stamp was issued last month on the second day of the League of United Latin American Citizens convention in Washington. Minnesota Stamp Expo opened two days later. If the Escalante stamp had been issued at the LULAC convention two days later, the stamp show would have been able to hold a first-day-of-sale event (which is still highly promotable).

One way to extend the reach of a first-day ceremony is to arrange for a special postmark for a new issue.

For example, the Escalante FDC by Panda Cachets illustrated here has a dedication event postmark arranged by the very active Claude C. Ries Chapter of the AFDCS, in the Los Angeles area where Escalante taught.

Conventioneers buying postal souvenirs of their event are unlikely to become long-term collectors and USPS customers. People who come to a stamp show because they heard a new stamp was being issued there are better prospects: They are being exposed not just to a new stamp issue but to the wide world of stamp collecting.

Lloyd de Vries is president of the American First-Day Cover Society. The views expressed in this column are his and not those of the organization.