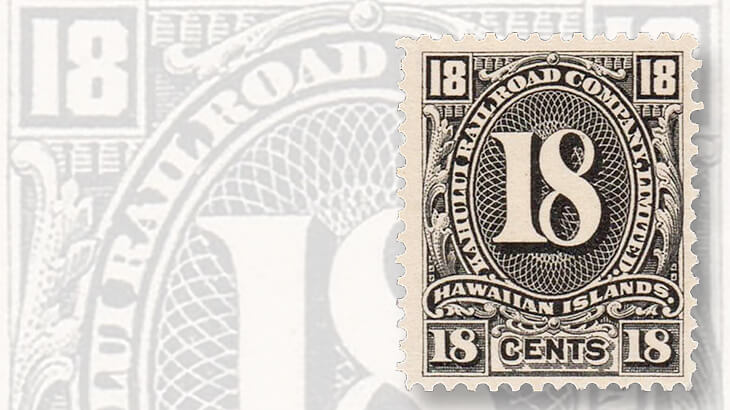 The 2016 Scott Specialized Catalogue of United States Stamps and Covers lists and values Hawaiian postage stamps, postal stationery, and revenue stamps. But it does not include the very attractive issues of the Kahului Railroad.

The railroad was in operation from 1879 to 1959. In 1894, the railroad company contracted with the American Bank Note Co. to produce stamps to show payment of freight charges on packages carried by the railroad. The stamps, printed by lithography with numeral designs, were delivered late in 1894 and went into use in January 1895.

Freight charges on the railroad seem to have been in multiples of 5¢. Unused examples of the American Bank Note 5¢, 15¢, 50¢, and $1 stamps are scarce, as are used examples of the 6¢ and 18¢ stamps. Cancellations were generally by red, orange, or blue crayon, or by a straightline “CANCELLED” handstamp.

A good place to test the waters for these railroad stamps is with unused 6¢ and 18¢ stamps, which are still relatively common. Examples in unused no gum condition can usually be found for about $5 each. Stamps in original gum condition sell in the $10-to-$20 price range.