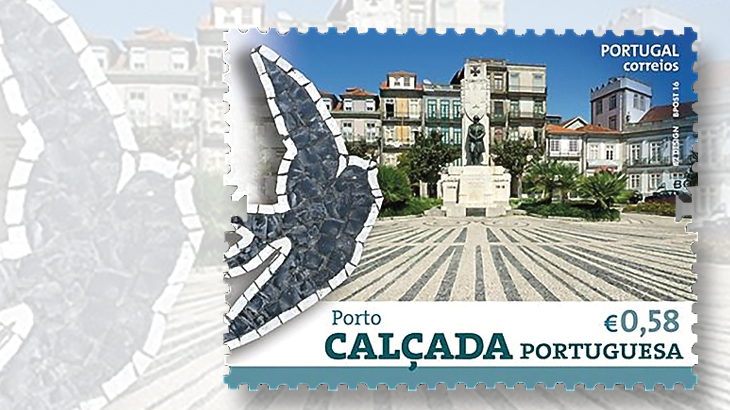 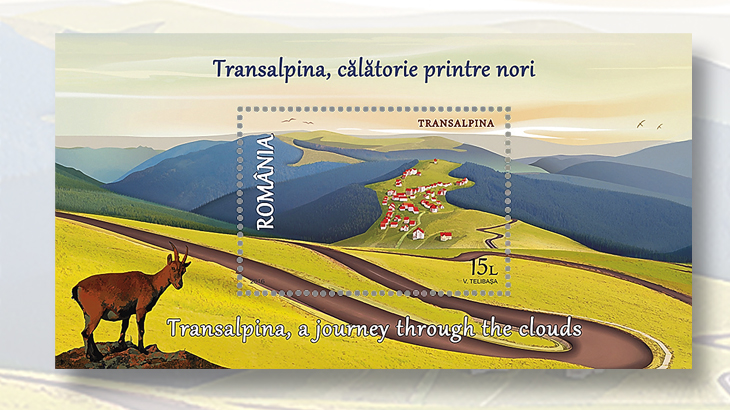 Romania features its highest road, Transalpina in the Parang Mountains of the Southern Carpathians, on this souvenir sheet issued Aug. 12. 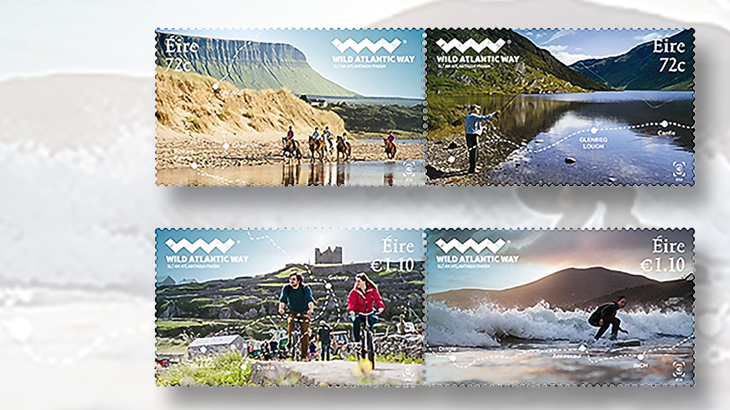 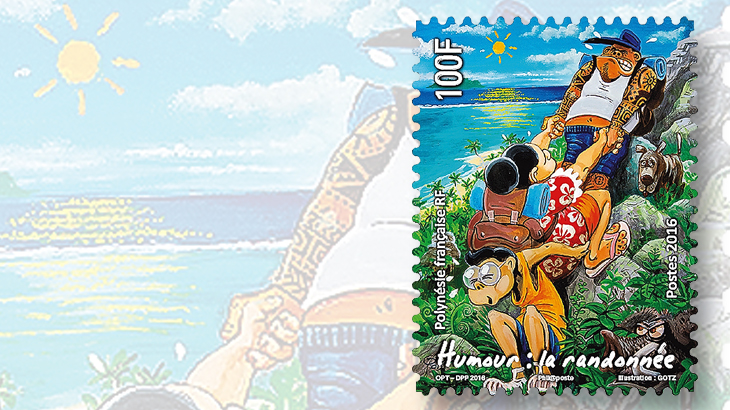 French Polynesia offers a humourous view of hiking on this recent stamp. 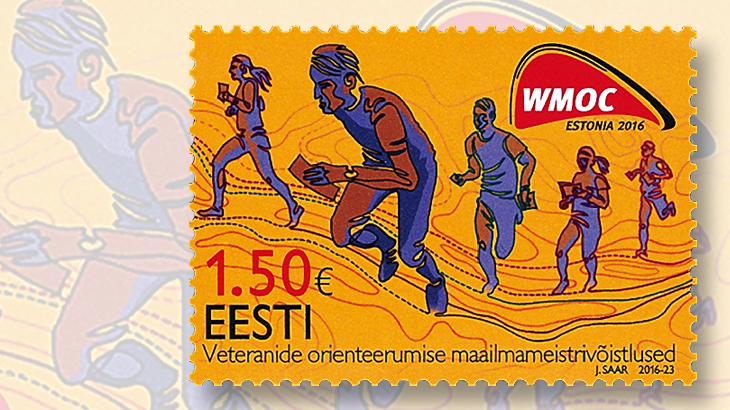 A stamp from Estonia commemorates the World Masters Orienteering Championship.
Previous
Next

Four Irish stamps highlight some of the activities found along the Wild Atlantic Way, the longest defined coastal touring route in the world.

Ireland’s An Post described the route: “It meanders along 2,500 km (1553 miles) from the Inishowen Peninsula in Donegal up in the north, right down south to Kinsale in Co. Cork.

“Alongside breath-taking scenery, this is a journey of discovery: Here you can feel wild, untamed, free and unbridled as you find yourself surrounded by some of the most dramatic and spectacular coastal views in the world. Dotted amongst untouched headlands and beaches are quaint villages and towns, bristling with history, heritage and the tradition of this rugged coastline.”

The stamps were issued July 28 in two se-tenant (side-by-side) pairs.

Horse riding on the coast at Grange and fly fishing at Glenbeg Lough are depicted on the €0.72 stamps. Bicycle riding on the Aran Islands, and surfing at Inch on the Dingle Peninsula are shown on the €1.10 pair.

As for surfing in Ireland, an article on the Surfer Today website, said, “Those not fond of the cold also have to contend with damp air and nippy waters, as well as stock up on a good selection of gear; booties, hoods, and several millimetres of wetsuit for protection against the elements, for starters. But for those who are game, Irish coasts offer up a glut of surf breaks to get stoked about.”

In addition to reproducing a photograph, each stamp design includes a dotted line connecting different points along the route.

Designed by Red and Grey, the stamps were printed by Cartor in sheets of 16.

A stamp and souvenir sheet issued Aug. 12 by Romania commemorate the country’s highest road, the Transalpina.

The website RomaniaTourism.com says of this 56-mile route: “If adventure and Alpine scenery sound alluring, the TransAlpina road offers an ideal mix of the two. Winding its way through valleys and plateaus up to 7,038 feet — a height not reached by any other mountain passage in Romania — the TransAlpina road offers breathtaking views together with lots of driving excitement.”

An aerial view of a hairpin curve is pictured on the 8-leu stamp printed in sheets of 28 and panes of eight with a central label. In this stamp design, there are two vehicles on the road and an eagle soaring overhead.

A map of the route is shown in the selvage to the left of the stamps in the pane of eight, and “Transalpina, a journey through the clouds” is inscribed in Romanian at the top of the pane and in English at the bottom.

The same phrase appears at the top and bottom of the souvenir sheet. This sheet contains a single 15-leu stamp showing the red-roofed houses of an alpine village. More twists and turns along the road and a chamois are pictured in the selvage.

Transalpina, which crosses the Parang Mountains of the Southern Carpathians, dates back at least 2,000 years, starting as a path used by shepherds and also serving as a military route for the ancient Romans.

It has been called different names, including “Devil’s Path,” “King’s Road,” and, more recently, “the best driving road in the world” by the BBC’s television show Top Gear. It also is listed among Europe’s top 10 best roads on the Ultimate Drives website.

Portugal has a long history of using various decorative mosaic motifs for its pedestrian walkways, and they are featured on a new set of four and a souvenir sheet called “Pavement.” They were issued July 28.

In announcing these stamps, Portugal’s CTT said, “Several civilizations have come and gone on Portuguese territory, having left a varied aesthetic legacy — also on the ground and on its walls.”

Each stamp design includes two images, a bird or floral mosaic on the left side and a larger scene in the center.

The calcada pavement of Lisbon is represented on the €0.47 stamp by a mosaic design of a crow sitting on the edge of a ship from Estrela Gardens and the tree-lined Avenida da Liberdade.

Inspired by the Romans, this style of using stones to form black-and-white patterns and designs began in the 19th century. This technique was soon adopted in other cities in Portugal and in Portuguese territories around the world.

Bird mosaics are shown on the €0.58 and €0.80 stamps featuring Porto and the Azores, respectively. The Porto stamp includes scenes of two of the city’s squares, Velasquez and Carlos Alberto. The Azores stamp depicts examples of calcada on the islands of Terceira and Sao Jorge. The latter scene also includes a red windmill.

A floral mosaic and the square in front of the Funchal town hall in Madeira are illustrated on the €0.75 stamp. The souvenir sheet contains a se-tenant block of the four stamps.

The firm B2 Design designed the stamps. The security printer of Belgium’s post office, bpost, printed them by offset in sheets of 50.

Other recent stamps show orienteering (a sport that combines navigation and racing skills) and hiking.

A 1.50 stamp from Estonia commemorates the World Masters Orienteering Championships held Aug. 5-14 in Tallinn. It was issued on the first day of the event.

French Polynesia’s 100-franc Hiking stamp was issued March 18 as part of a series offering humorous images of everyday life. It shows teamwork on an uphill climb.