Add another stamp to the list of those featuring real people: U.S. Stamp Notes 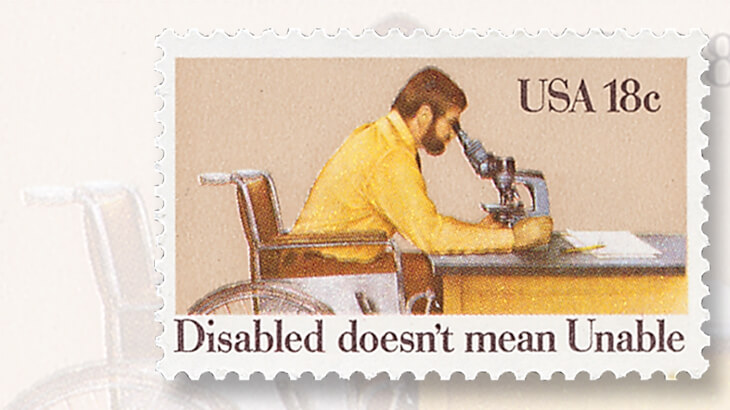 The design of the 1981 18¢ International Year of Disabled Persons stamp was a rush job and is based on the photograph of a living person, according to the designer, Martha Perske.

For many years, I have been convinced that the design of the 1981 18¢ International Year of Disabled Persons stamp (Scott 1925) was based upon the image of a living person.

Thanks to Kenneth Rothschild, who was able to contact the designer, Martha Perske, we have confirmation that this stamp should be added to the list of United States stamps based on images of living people.

A minor problem is that Perske will not reveal the identity of her model.

In her reply to Rothschild, Perske does provide additional background information about the stamp:

“The Stamps division of the USPS had a deadline for releasing the commemorative stamp in honor of the International Year of Disabled Persons, and they were seriously behind in production. Someone with the Stamp Advisory Committee who knew of my illustrations of people with disabilities called and asked if I could do it,” she wrote.

“It was a real rush job, but fortunately, I had a lot of help from the late artist/illustrator Stevan Dohanos who served as a design coordinator for the Citizens’ Stamp Advisory Committee … Steven lived in Westport, CT, not far from me. He was very kind and took a lot of time guiding me through my design. I will always be grateful to him.”

She added, “I drew from a photograph that I took of a real person whose name is not publicly known and will remain that way. I no longer have the original photograph. Physical characteristics of the person who posed for the photo were altered to comply with the USPS’s ban on depicting a recognizable living person on a stamp. My rendering was meant to be representative of all persons with disabilities (obvious or not), regardless of age, gender, or nationality.”

The stamp was issued June 29, 1981, in Milford, Mich. The first-day ceremony program describes Perske’s design as portraying “a man in a wheelchair operating a sophisticated microscope,” and also says that it “graphically illustrates the theme of the stamp, ‘Disabled doesn’t mean unable.’ “

Any Linn’s reader who would like a copy of my list of U.S. stamps including or based upon the images of living people can obtain one by writing to me, John Hotchner, Box 1125, Falls Church, VA 22041-0125.

Please include a stamped addressed business-sized envelope, and 30¢ in mint postage to cover the cost of photocopying.

Mother and child identified on 1993 stamp