How post offices used to make the return of due postage easy: U.S. Stamp Notes 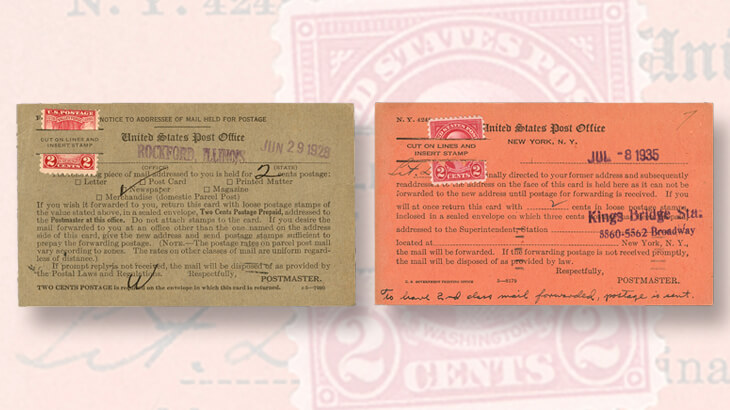 Both these postage due notices from 1928 (left) and 1935 (right) were used as intended with needed postage inserted in the space provided.

In the good old days, it was the policy that post offices would expend the time and effort to ask for postage needed to complete a delivery.

How does the post office encourage an addressee to send in the required postage? Make it easy to reply.

In the two examples shown, post offices used an excellent form that allowed the addressee to return the needed stamp together with the request notice. The first example is from Rockford, Illinois, in 1928; and the other is from New York City in 1935.

In each case, the notice is on the reverse side of a Postal Office Department postal card with a penalty imprint.

In the 1928 Rockford example, a newspaper needed to be forwarded to a new address, which required payment of 2¢. The New York City example needed a 2¢ forwarding fee for a magazine.

While first-class mail included forwarding if needed, periodicals did not.

I’m not certain that the illustrated notices were returned to the post office because the form would have eventually been destroyed after the stamp had been removed and the mailpiece had been sent on its way. But they show good examples of a good idea.

Tip of the week: Latakia 1931 overprinted postage due stamps