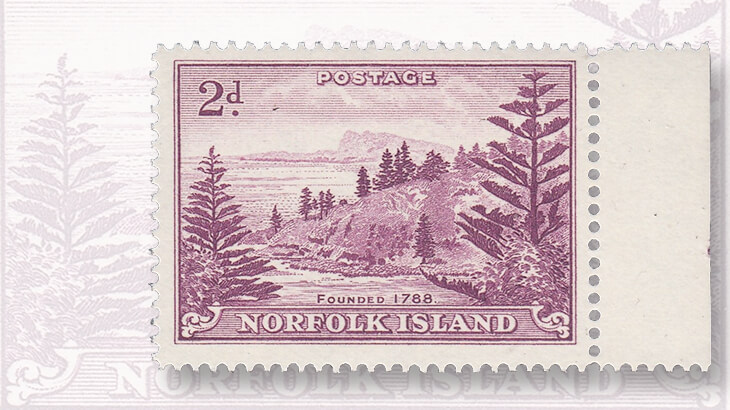 The 1956-59 Norfolk Island definitive stamps reissued on white paper (Scott 1-4 varieties) are the key set to a Norfolk Island collection and are a good buy in mint never-hinged condition at the 2016 Scott Standard Postage Stamp Catalogue value of $140.

Norfolk Island lies in the South Pacific about 877 miles east of Evan’s Head, Australia. Many of the inhabitants are the descendants of Pitcairn Islanders who moved there beginning in 1856. Today, the population of the island is about 2,200.

Norfolk Island issued its first set of stamps (Scott 1-12) on June 10, 1947. The original engraved set was perforated gauge 14 on toned paper. The stamps in the set showed various scenes around the island.

The white-paper varieties are the key issue to a Norfolk Island collection. We have not seen a used set sell, but we expect that $220 would not be a bad price, if one became available. A set in mint never-hinged condition is a good buy at the Scott catalog value.