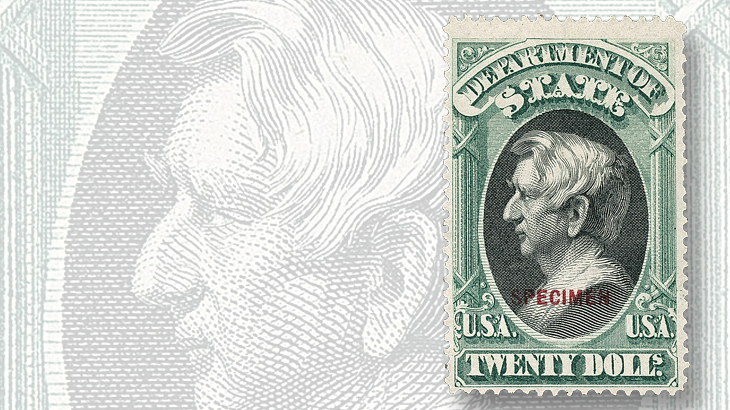 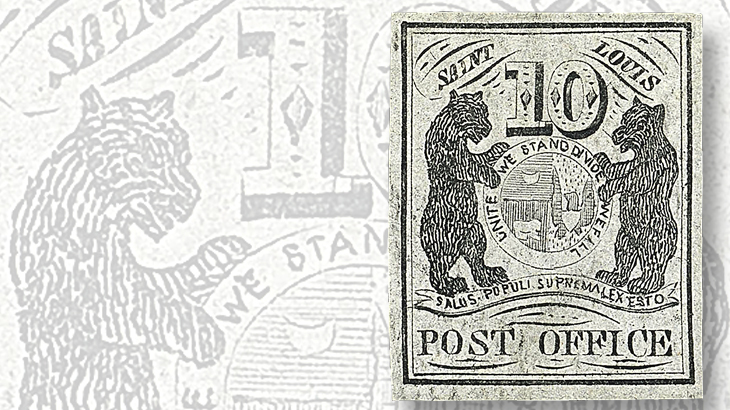 Several important postmaster’s provisional stamps will be offered at the Sept. 14 Robert A. Siegel auction of the Alan collection of U.S. stamps, including this unused 10¢ St. Louis Bears on gray-lilac paper with large margins. 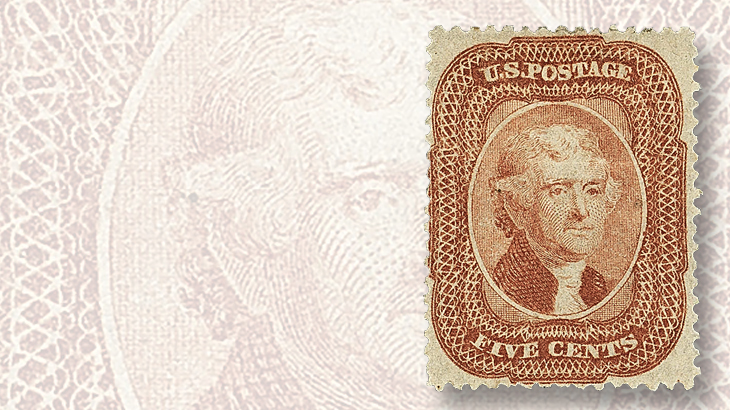 The earliest documented use of the brick red color variety of the 1858 perforated 5¢ Thomas Jefferson type I stamp is Oct. 6, 1858. This example with original gum is offered in the Sept. 14 Siegel auction of the Alan collection.
Previous
Next

The Alan collection of U.S. stamps will be offered in two sessions Sept. 14, followed by part 2 of the Grant Inman collection, presenting U.S. Official stamps, in an afternoon session Sept. 15.

The 484 lots in the Alan collection consist overwhelmingly of unused and mint stamps from the classic era of U.S. issues. The collection was assembled with an eye for exceptional centering; the lot descriptions repeatedly point out high grading and balanced margins on stamps where such characteristics often can be elusive.

The stamps range in catalog value from two digits to six digits, but those on the lower end of the scale also display top-notch grading.

An example is the 2¢ pink George Washington from the 1894 first Bureau issue (Scott 248). An unused example of this stamp grading very fine carries a value of $30. The example in this auction is listed by Siegel with that Scott catalog value, but this particular stamp grades Gem 100 with “a single hinge mark,” which Siegel notes is the only example with this grade (another hinged 100J is also recorded), and it therefore attains a value of $600 in Stamp Market Quarterly.

The Alan collection opens with several important examples of postmasters’ provisionals, the stamps issued by postmasters in various cities prior to the issuance of the first U.S. regular postage stamps in 1847.

St. Louis postmaster John M. Wimer offered his customers stamps showing two standing bears from the Missouri coat of arms, and a no-gum unused 10¢ black on gray-lilac paper (Scott 11X5), type II, position 4, is among the provisionals offered in this sale. Siegel describes it as a “spectacular classic rarity,” with large even margins.

It is listed by Siegel with the Scott catalog value of $50,000, which Scott prints in italics to indicate an item that can be difficult to value accurately.

The stamp previously was part of the collection of Col. Green, T. Cullen Davis (“Texas Collector”) and Peyton (“Isleham”), and is accompanied by a 2009 Professional Stamp Experts certificate with a grade of XF 90, identified by Siegel as “the highest grade awarded to any unused St. Louis Provisional.”

This rare variety of the 1851 1¢ Franklin is the only one that shows the complete design. Other types of the same design have elements of the frame missing or incomplete.

The stamp is listed by Siegel with the Scott value of $67,500, which again appears in Scott in italics.

The Alan collection sale also offers a brick red variety of the perforated 1858 5¢ Thomas Jefferson type I stamp, with original gum with two small ink notations. It stamp is described as having a barely noticeable “picked-out inclusion to the right of Jefferson’s face described on most recent certificate as ‘filled.’” With 1972 and 2006 Philatelic Foundation certificates, the stamp is listed with its italicized $80,000 Scott catalog value.

The auction offers individual examples of these specimen-overprinted stamps, including the dollar values of the William H. Seward State Dept. stamps (Scott O69S-O71S). The $20 top denomination is a great rarity, with just seven recorded as sold, and only four surviving stamps now on record. It carries an italicized $100,000 value in the Scott catalog.