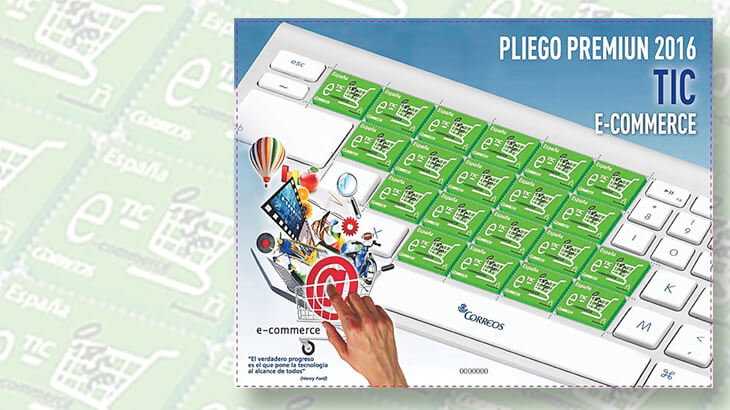 Spain commemorates e-commerce on a new stamp in its Information and Communication Technologies series. The pane of 20 is shown. 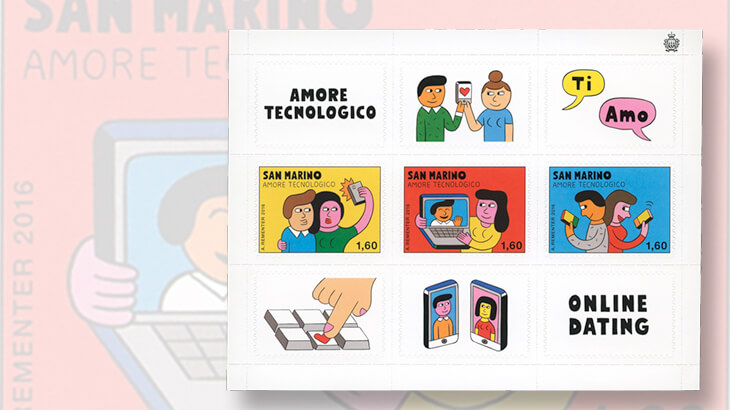 San Marino tackles the subject of online dating on a pane of three stamps and six labels issued June 7. The designs are by Andy Rementer. 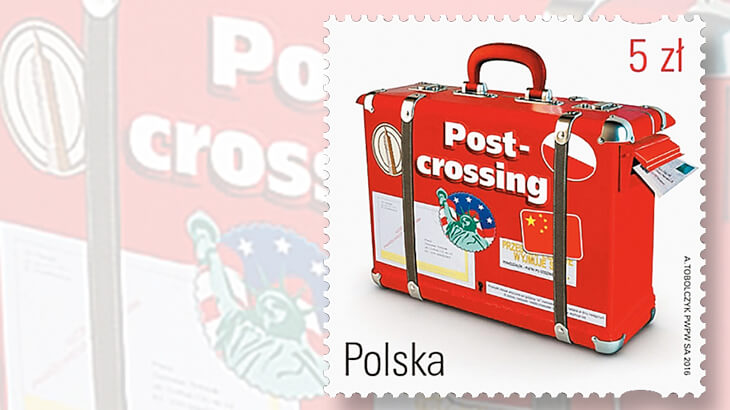 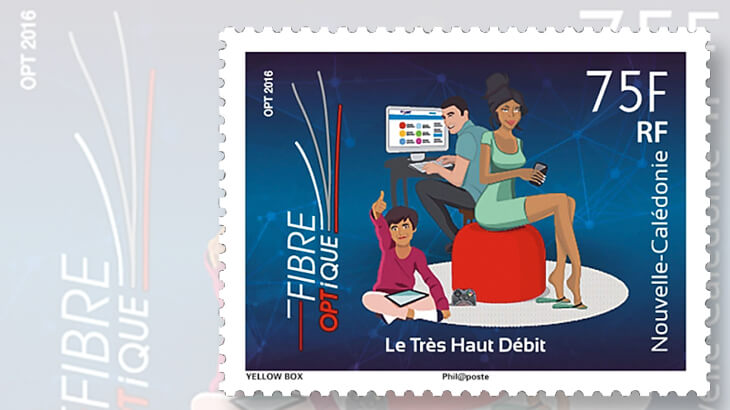 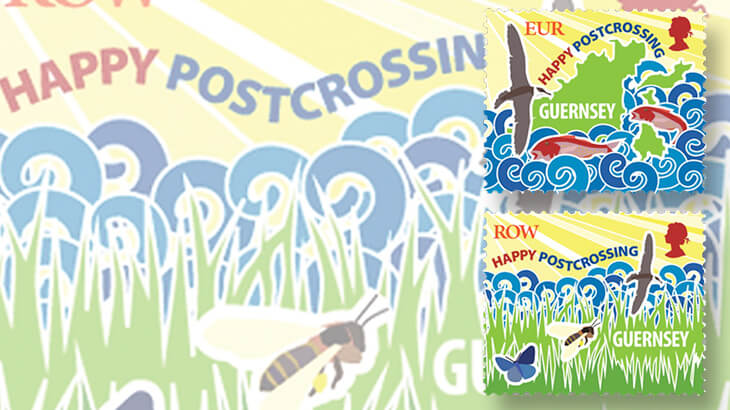 Two new international-rate stamps from Guernsey carry the message “Happy Postcrossing” and show some of the bailiwick’s wildlife.
Previous
Next

The Online Dating stamps were issued June 7 by San Marino in a pane of three stamps and six labels. San Marino is calling this issue “Amore Tecnologico,” which translates to “technological love.”

The first stamp in the online dating pane shows a couple taking a selfie with a cell phone.

In the next design, another couple is communicating by computer. The woman is holding a computer, and the man is shown waving on the computer screen.

The third stamp represents communicating by cell phone. A man and woman are pictured with their backs to each other, each looking at the phone.

Three of the labels also include images. One shows a couple holding a cell phone with a heart on the screen, and the other pictures a hand touching a heart on a keyboard. The third image depicts cell phones, with pictures of a man on one screen and a woman on the other.

Text is included on the remaining three labels in the pane: “Amore tecnologico,” “Online Dating,” and cartoon balloons with “ti” and “amo” (translates to “I love you”).

In an article on the graphic design and creativity website It’s Nice That, Rementer said of his designs: “I tend to use bold colour and simple shapes in my work, qualities that lend themselves to the tiny reproduction of a stamp.

“There’s a playful quality in the stickers [labels] that echoes the flirtatiousness of the characters seen throughout the stamps.”

Cartor printed the stamps by offset.

The latest stamp in Spain’s Information and Communication Technologies series commemorates e-commerce. The 0.45 stamp was issued July 4 in a pane of 20.

In announcing this stamp, Spain’s post office, Correos, defined e-commerce as “the buying and selling of products through Internet and other computer networks,” adding that “Every day millions of transactions are conducted worldwide through electronic networks, growing at the expense of traditional trade.”

The stamp design depicts a white “e” and “shopping cart” on a green background. The initials “TIC” between these two items represent the Spanish words for information and communication technologies (tecnologias de informacion y comunicacion).

The pane features a background design of a computer keyboard, and the 20 stamps replace the letter and number keys.

An illustration in the lower left of the pane shows a hand clicking an “@” sign and a shopping cart overflowing with items, including a fish, apple, orange, flower, bicycle, plane, hot air balloon, football, and Earth.

Below the illustration is a quote from Henry Ford, the American inventor, industrialist and founder of the Ford Motor Co.

A 75-franc stamp issued June 10 by New Caledonia marks the introduction of fiber optic technology to this French overseas territory in the southwest Pacific.

The stamp shows a family of three with the father working at a desktop computer, the mother holding a cell phone, and the son with a tablet.

The inscription below the design, “Le Tres Haut Debit,” translates to “the very high speed.”

The rollout of fiber optic lines and the resulting new services is expected to be completed by the end of 2022.

Philaposte in France printed the stamp by offset.

Poland and Guernsey issued stamps July 14 to honor the 11th anniversary of Postcrossing, an international project in which people from around the world send each other postcards.

The project was launched July 14, 2005, by Paulo Magalhees of Portugal. As of May 31 of this year, 36 million postcards had been exchanged.

The 5-zloty stamp from Poland shows a red suitcase with the word “Postcrossing” on the front and a mailbox slot on the side with some postcards hanging out of it.

Several stickers are affixed to the front of the suitcase, including one showing the Statue of Liberty and a stylized United States flag.

Agata Tobolczyk designed this stamp, and the Polish Stamp Printing Works printed it in panes of six.

Pictured at the top of the pane is a red plane pulling a “Postcrossing” banner. Line drawings at the bottom of the pane show a computer screen, a postcard being mailed, and postcards inside a mailbox.

The designs of the two nondenominated stamps from Guernsey “reflect the joy of living on Guernsey and the Bailiwick Islands surrounded by an abundance of natural beauty and wildlife, on land and in the ocean,” according to Guernsey Post.

The stamp inscribed “EUR” in the upper left pays the rate for mail to European countries, currently 64 pence. The design features fish and a seabird.

The other stamp is inscribed “ROW” for “rest of the world.” It pays a 70p international rate. A seabird, butterfly, and bee are included in this design.

Sue Hamon of Guernsey Post designed the stamps. Lowe-Martin printed them by offset in sheets of 10.

Bridget Yabsley, the acting head of Guernsey Post’s philatelic bureau, said: “Guernsey Post has supported this project since 2014 when its first Postcrossing stamp was issued. Today, Postcrossing brings together many people across the world, enabling them to make new friends, learn new languages and gain a better understanding about other countries and their people — so we’re thrilled to be involved in the 11th birthday celebrations of this global phenomenon.”

On Oct. 11, 2001, the Netherlands issued the first set of stamps commemorating Postcrossing (Scott 1399). The stamps in that se-tenant set of six show postcards.