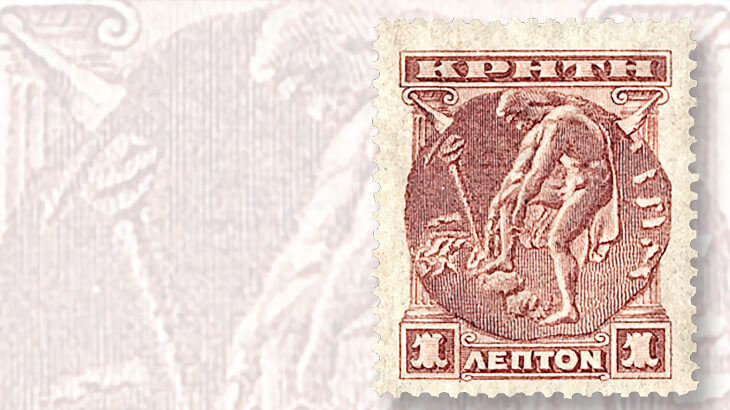 The stamps of Crete have wide appeal to several different types of collectors. The 1900 first set of the Cretan state (Scott 50-53) is a good buy at the 2016 Scott Classic Specialized Catalogue of Stamps and Covers 1840-1940 value of $10.75 in unused hinged condition.

Crete is the fifth largest island in the Mediterranean Sea. It was the center of the ancient Minoan civilization (2700-1420 B.C.), which preceded the Mycenaean and classic Greek civilizations of antiquity.

The Palace of Minos at Knossos is one of the best known and most spectacular archaeological sites in Europe. The beautiful wall frescoes of the lost civilization show a happy and productive people who attained a high level of civilization before being wiped out by volcanic eruption, tidal wave, earthquakes and invasions.

Crete was ruled by the Romans, Byzantines, and Venetians before being conquered by the Ottoman Empire in 1669. After repeated uprisings and revolts against the Ottomans, a Turkish massacre on Aug. 25, 1898, led to intervention by the Great Powers and the establishment of an autonomous Cretan state in November 1898.

The Cretan state issued its first postage stamps on March 1, 1900. In 1908, the Cretan Assembly voted for union with Greece, and Greek stamps supplanted those of Crete. The fait accompli of unification with Greece received international de jure recognition in 1913.

There are a lot of expensive and complicated forerunners, local issues, and offices abroad for someone looking for a heavy specialty. The stamps of the Cretan state are fairly straightforward, but not without their own challenges.

Crete appeals to a wide swath of different types of collectors: Greek specialists, dead country and classic stamp collectors, and topical collectors of mythology on stamps and Old World archaeology.