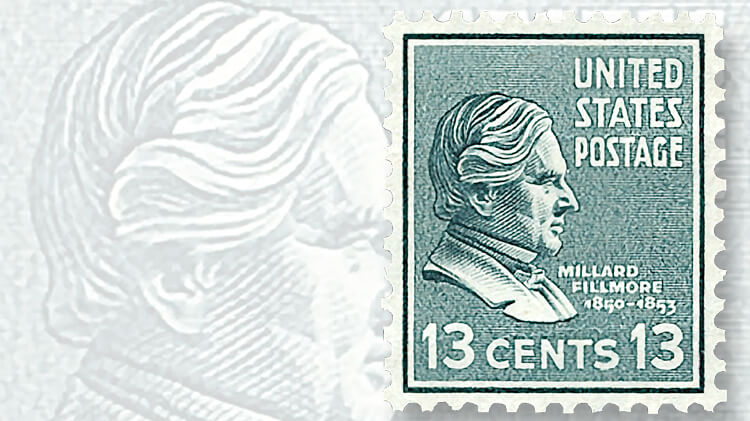 Specialist collectors are looking for mint panes of 100 of the U.S. 13¢ Millard Fillmore stamp (Scott 818) and on-cover uses.

For those who view 13 as unlucky, Millard Fillmore might serve as a case in point.

Fillmore was a Whig politician from upstate New York. He served in the New York Assembly, the U.S. House of Representatives, and as New York state comptroller before being nominated as Gen. Zachary Taylor’s running mate in the presidential election of 1848.

The Whigs won, and when Taylor died in office on July 9, 1850, Fillmore became the 13th president of the United States. Although nothing terribly disastrous happened during his presidency, he was unable to secure the nomination of his party in 1852.

As an anti-slavery moderate, he pleased neither the anti-slavery wing nor the pro-slavery wing of his party. He was the last Whig ever to serve as president of the United States. In 1856, he was nominated for president by the American Party, but finished third with eight Electoral College votes behind the Democrat, James Buchanan, and the Republican, John C. Fremont. Historians usually place him near the bottom in their 10 worst U.S. presidents lists.

Whether he was a poor president or just unlucky, Fillmore has only been commemorated twice on U.S. postage stamps: a 13¢ stamp in the 1938 Presidential series (Scott 818) and a 22¢ stamp (Scott 2217d) in the 1986 Ameripex souvenir sheets.

The Presidential series remains one of the most popular with general and specialist U.S. collectors. Mint panes of 100 of the Millard Fillmore stamp are still available and selling in the $60-to-$100 price range, depending on grades of the majority of stamps in the pane, against the 2016 Scott Specialized Catalogue of United States Stamps and Covers value of $130 for 100 mint never-hinged single stamps.

The Scott U.S. Specialized catalog values the stamp on cover at $5 and as a single use on a special-delivery cover at $75. It is a good buy at those prices.