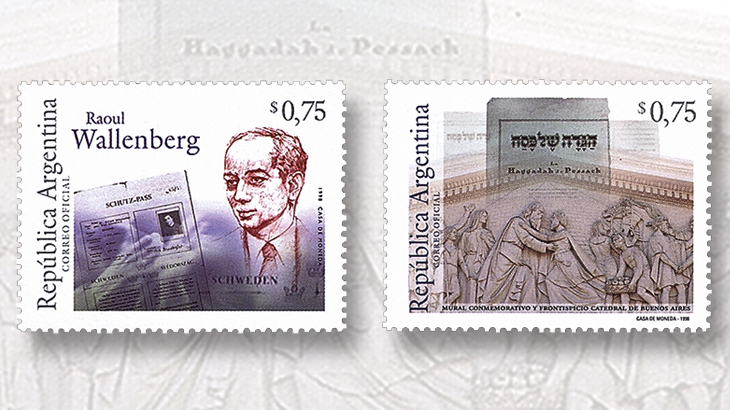 These two stamps from Argentina pay tribute to Raoul Wallenberg, the Swedish diplomat who saved thousands of lives during the Holocaust, and show the Holocaust mural at the Cathedral of Buenos Aires. 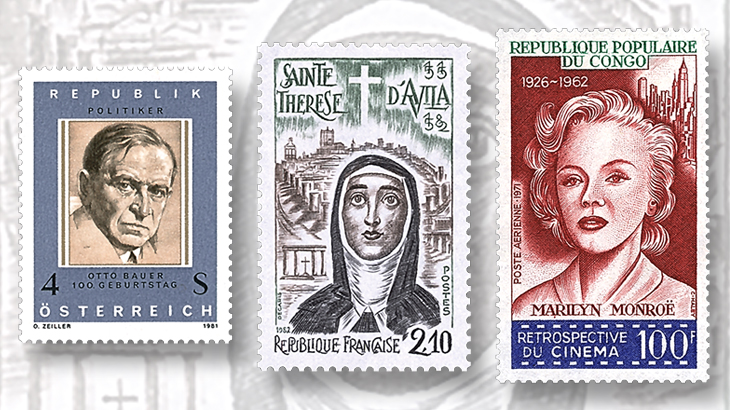 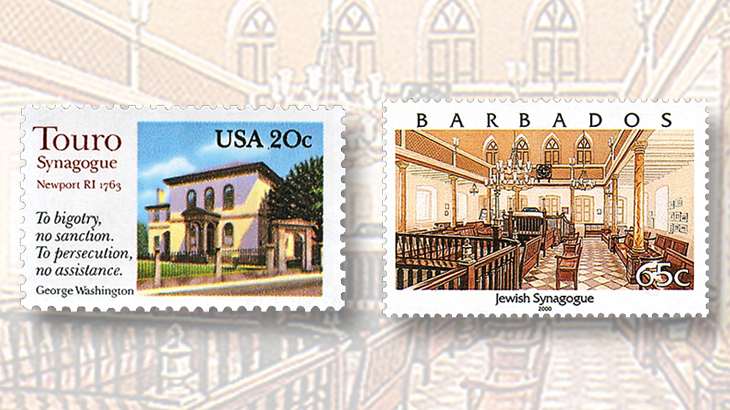 Stamps show the oldest still-existing synagogues in the United States (Scott 2017) and Barbados (711). 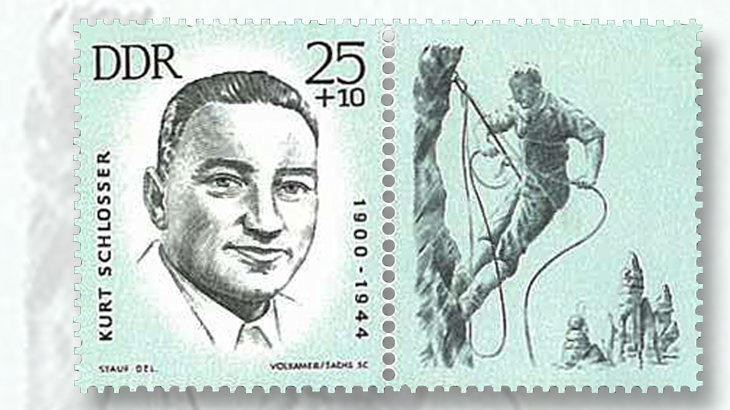 East Germany issued a series of semipostal stamps in the 1960s remembering sportsmen who were victims of the Nazis. Mountaineer Kurt Schlosser is shown on this 25-pfennig+10pf stamp and the se-tenant label. 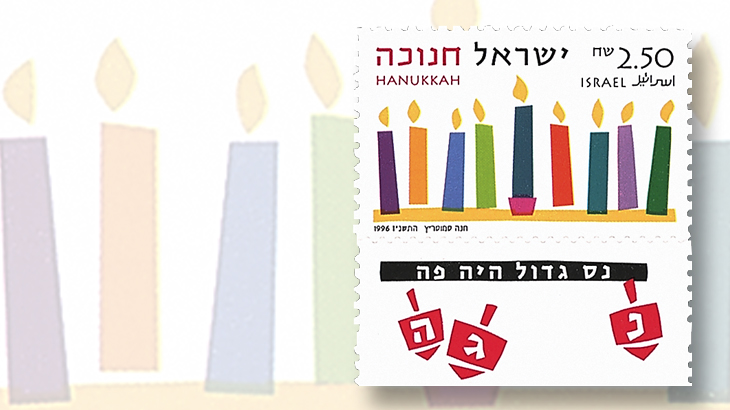 The Israeli stamp from the 1996 Israel-United States Hanukkah joint issue. 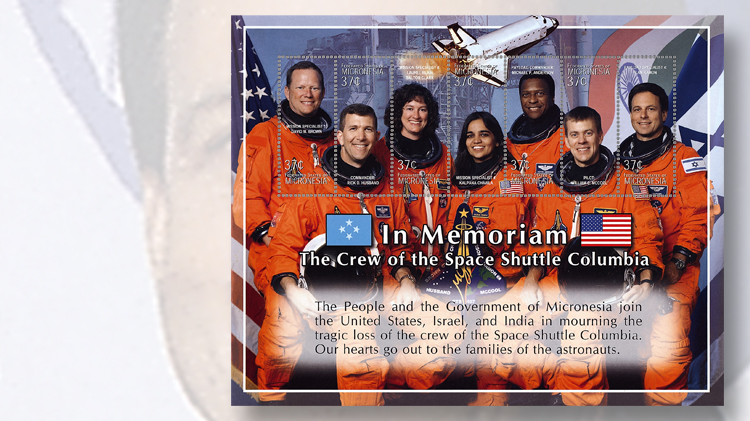 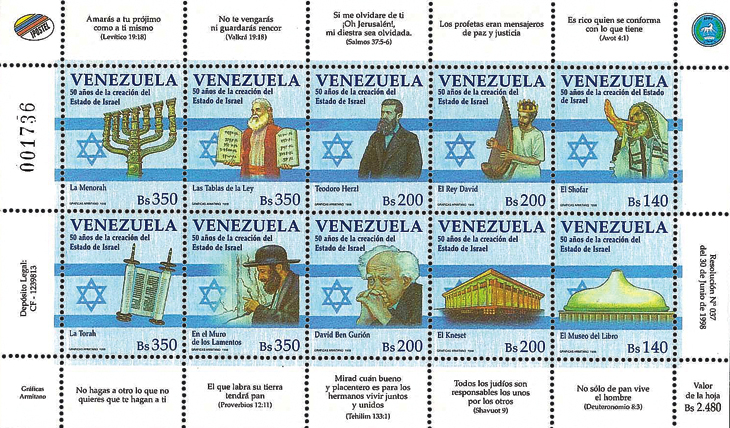 A pane of 10 stamps issued by Venezuela in 1998 commemorates the 50th anniversary of the state of Israel. A menorah, the Ten Commandments and the Torah are pictured. 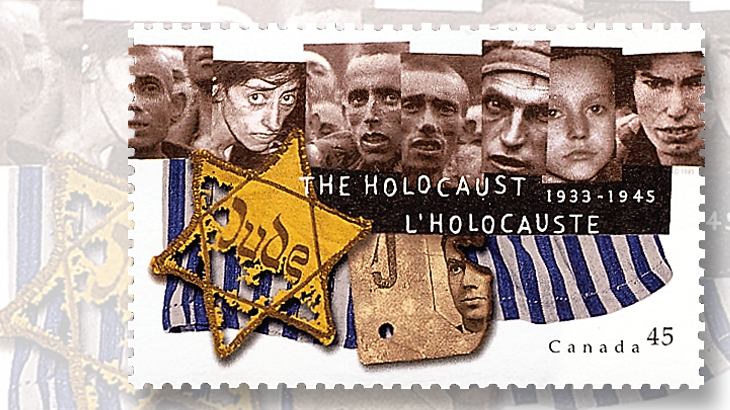 Canada issued a stamp in 1995 to commemorate the 50th anniversary of the end of the Holocaust. 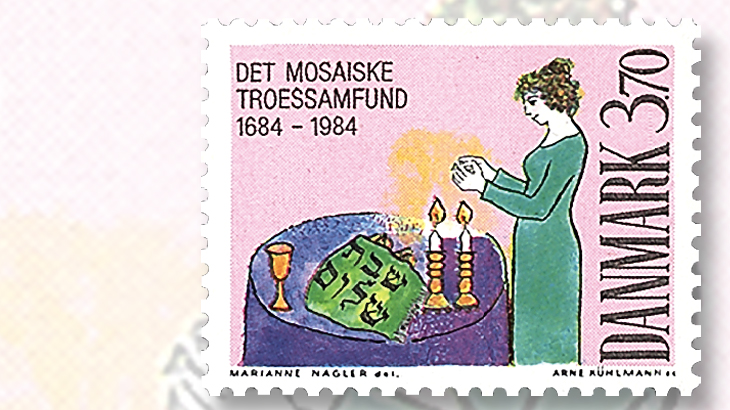 A 1984 stamp marks the 300th anniversary of the Danish Jewish community. 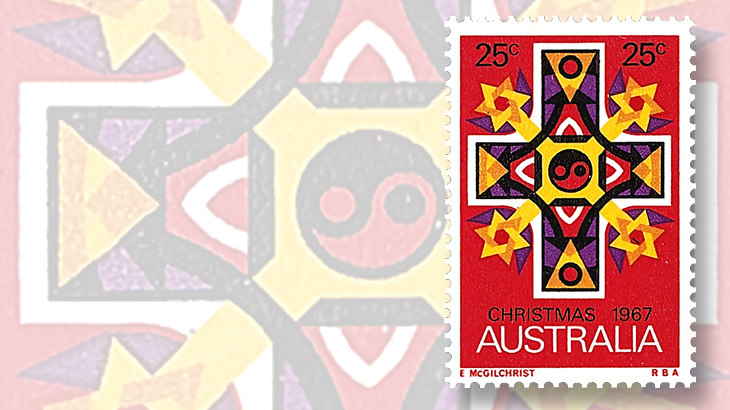 Stars of David are included in the design of this 25¢ Christmas stamp issued Nov. 27, 1967, by Australia. 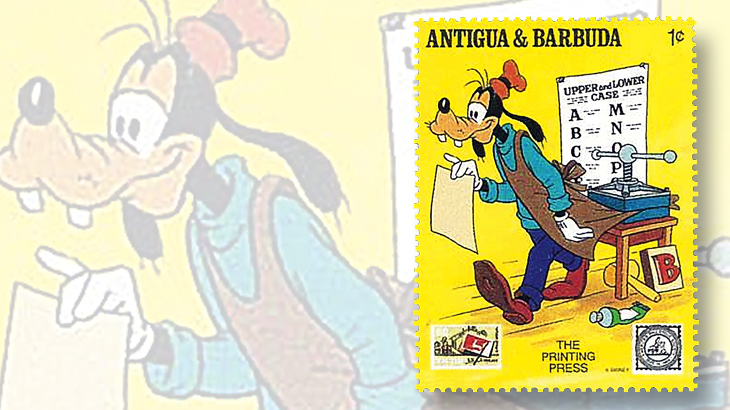 A stamp from Antigua and Barbuda shows Walt Disney’s Goofy as a printer and a stamp-on-stamp design of a 1959 Israeli stamp.
Previous
Next

The Jewish religion, history and culture are all recorded in miniature on stamps, especially those issued by Israel.

Numerous stamps from Israel commemorate festivals. For example, a 2.50-shekel stamp was issued Oct. 22, 1996, in celebration of Hanukkah, the festival of lights (Scott 1289).

This stamp picturing lit candles is noteworthy for two reasons. It was Israel’s first self-adhesive stamp, and it was the country’s first joint issue with the United States. The 32¢ U.S. stamp shares the same design (Scott 3118).

The Bible, the Holocaust, synagogues and Jewish life have all appeared on Israeli stamps over the years. These subjects in addition to others honoring Jews and their religion have appeared on stamps from many other countries as well.

Several European countries have featured their synagogues on stamps, including the Vienna City synagogue on a 1976 stamp of Austria (Scott 1050); Brussels’ Great Synagogue on a 1978 semipostal of Belgium (B973); and a Sofia synagogue on a 1988 stamp marking the 500th anniversary of the settlement of Jews in Bulgaria (3671).

France issued a stamp in 1988 depicting the synagogue on the Rue De La Victoire in Paris (Scott 2100), Hungary issued a semipostal stamp in 1947 showing Dohany synagogue in Budapest (Scott B198B), and Poland shows Tykocin synagogue on a 1984 stamp (2662). Other countries that have issued stamps depicting synagogues include Czechoslovakia, Luxembourg, and the Netherlands.

The 300th anniversary of the Danish Jewish community was commemorated in 1984 on a stamp from Denmark (Scott 766). The design depicts a familiar Friday night scene of a woman lighting the Sabbath candles and the table set for Sabbath with a cup of wine and loaves of bread covered with the challah cloth.

Armenia has issued some interesting Judaica-related stamps. A souvenir sheet issued in 1992 depicts Mount Ararat, the site where Noah’s ark is believed to have come to rest, and a rainbow (Scott 431). This souvenir sheet is scarce because only a small quantity was produced.

In 1995, a souvenir sheet simply showing Mount Ararat was issued by Armenia (Scott 520).

Both Australia and Argentina have issued their share of Judaica-related stamps.

A 1965 stamp from Australia marks the 100th birth anniversary of General Sir John Monash, a military hero and a Zionist.

A stamp in the 1970 set commemorating the 200th anniversary of Capt. James Cook’s exploration of the eastern coast of Australia is based on a painting by Emmanuel Philip Fox, an Australian Jew (Scott 479).

A 1967 Australian Christmas stamp includes Stars of David in its design (Scott 430), and a 1983 Christmas stamp was designed by 11-year-old Jewish student Justine Jacobi (884). The latter stamp shows Santa Claus and his reindeer flying over a beach.

The 1¢ Religion stamp (Scott 1053) in Australia’s 1988 Living Together series depicts a church, mosque and a synagogue with a Star of David.

In 1989, Argentina issued stamps commemorating the 100th anniversary of Jewish immigration and settlement to Argentina (Scott 1660-1662), and in 1998 issued a stamp showing numerous Stars of David for Israel’s 50th anniversary (2013).

This was followed by two other Judaica-related stamps in 1998: a commemorative honoring Raoul Wallenberg (Scott 2026) and a stamp showing a mural dedicated to victims of the Holocaust and also including an inscription in Hebrew (2037).

In addition to the stamp from Argentina, Wallenberg, the humanitarian who saved 100,000 Jews from the Nazis, has appeared on stamps from other countries, including the United States (Scott 3135) and his native Sweden (1643 and 2693).

Guyana commemorated Wallenberg by oveprinting a limited edition of 300 sets of its Flowers issue.

Many countries have remembered the Holocaust on their stamps. For instance, Albania issued two Holocaust stamps in 1999 (Scott 2599-2560), and Canada marked the 50th anniversary of the end of the Holocaust on a commemorative issued in 1995 (1590).

East Germany, too, has issued stamps connected to the Holocaust. Several semipostals were issued to raise money for the building and maintaining of memorials at former concentration camps.

The Holocaust is summed up simply in the design of a 1982 San Marino Refugee semipostal stamp that shows a young person behind barbed wire (Scott B39).

Many well-known people of Jewish heritage have been commemorated on stamps.

Among these are Austrian writer and politician Otto Bauer, who appeared on an Austrian stamp in 1981 to honor the 100th anniversary of his birth (Scott 1186).

In 1982, France and Vatican City issued stamps depicting St. Teresa of Avila (France Scott 1846, Vatican City 710-712). It is said that she had a Jewish grandmother.

Marilyn Monroe also could be included in a Judaica collection as she converted to Judaism when she married playwright Arthur Miller. In addition to being honored by a stamp in the U.S. Legends of Hollywood series (Scott 2967), she has been featured on stamps of many other countries. People’s Republic of Congo included her on a stamp in its 1971 Cinema Retrospective set (C107).

Space also has its Judaica connections. In 1969, Romania issued a stamp to commemorate the link-up of Soyuz capsules. Soyuz 5 was manned by Boris Volynov, a Jewish Russian cosmonaut.

Unfortunately tragedies in space have also been commemorated. Hungary in 1986 issued a souvenir sheet titled “In Memoriam” for the Challenger explosion (Scott 2971). Among the those killed was Jewish astronaut Judith Resnik.

Following the space shuttle Columbia disaster in 2003, Hungary issued another souvenir sheet (Scott 3837). This time among those lost was Ilan Ramon, a Jewish astronaut from Israel.

Other countries, too, have issued stamps relating to these space disasters. Micronesia and other postal administrations showed the crew of Columbia on panes of seven se-tenant stamps (Micronesia Scott 540).

There are some scarce Judaica stamps to be found. One of these is the unissued stamp in the 1987 Bible Society of South Africa set (Scott 702-704), which was pictured in the Stamp Market Tips column in the July 11 Linn’s.

This stamp is inscribed “the word of God” in Koine Greek and Hebrew. Due to objections by Jewish religious leaders that the name of God would be dishonored by being postmarked or possibly thrown in the bin, the stamp was withdrawn from sale before it was issued, and all the stamps were recalled. However, isolated examples are known to have been sold to the public, and some used examples also have been reported. However, they are very scarce.

In the early 1990s, Bangladesh had a stamp produced to commemorate Palestinian freedom fighters, but the inscription in Arabic had the word “terrorist” instead of “freedom fighter.” Despite being withdrawn from sale, examples of the stamp exist, and some reportedly were sold at a local post office.

Even unusual issues can appear in a Judaica collection, such as one stamp in a 1989 Disney set from Antigua and Barbuda promoting stamp collecting. This stamp (Scott 1238) depicts Goofy as a printer and also includes a stamp-on-stamp design of a 1959 Israeli stamp (150).

The Judaica theme can be summed up in one issue, and that is the 1998 panes of 10 from Venezuela commemorating the 50th anniversary of the state of Israel (Scott 1599). The stamps picture Judaica-related themes and symbols, including a menorah (a seven-branched candlestick), Moses and the Ten Commandments, David and his harp, a rabbi blowing the shofar (a ram’s horn), David Ben Gurion, the Knesset, and Theodor Herzl.

The stamps mentioned in this article by no means represent a complete Judaica collection, but hopefully they provide an insight as to what can be found when collecting this topic.

In December 2005, he formed the Judaica Thematic Society specializing in Judaica-themed stamps from around the world, excluding Israel. For information  about the society, e-mail Goodman, judaicathematicsociety@talktalk.net.