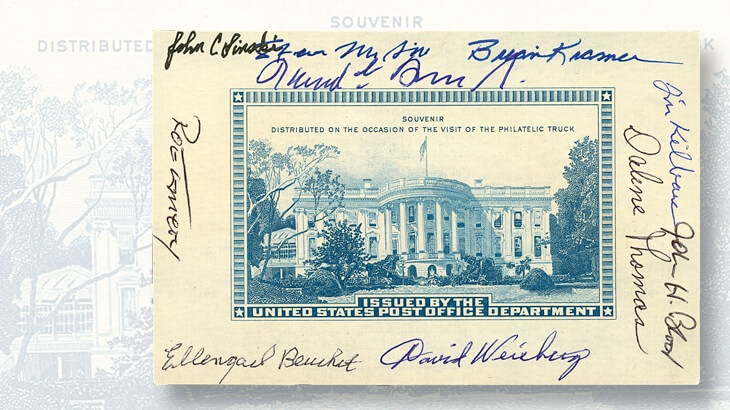 It is 75 years since the philatelic truck traveled around the country to make friends for the Post Office Department. Some 730,000 of these sheets were produced to be given away as souvenirs. The Rocky Mountain Philatelic Library in Denver prepared 81 of

As a fan and collector of stamp club souvenirs, I was delighted to receive the autographed philatelic truck souvenir produced for the 2015 volunteers appreciation dinner at the Rocky Mountain Philatelic Library in Denver.

The philatelic truck was a public relations effort by the Post Office Department in 1939 to familiarize the public with postal services.

As they traveled around the nation, the postal clerks staffing the truck gave away a philatelic truck sheet to each visitor. A little more than 730,000 were produced.

These sheets used to be common, but have become increasingly hard to find as we pass 75 years since the truck was making its rounds.

The reverse side of the sheet shows the dinner menu. It was printed on a letter press by Marc Silberman, a library volunteer.

A total of 81 sheets were produced for the dinner.

How post offices used to make the return of due postage easy: U.S. Stamp Notes