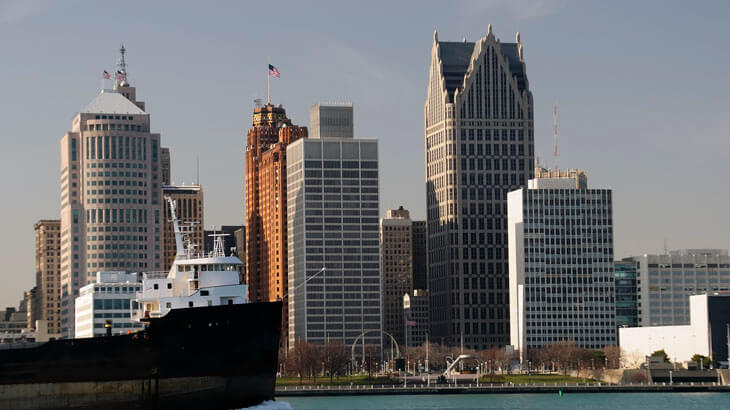 Sailors aboard ships navigating the Detroit River like the one above need mail, too. That's why there's the J.W. Westcott II, the only floating U.S. post office.

Our latest Linn’s Buzz gives you a quick look at what's happening in the world of stamp collecting:

NPR reporter Quinn Klinefelter gave a report for Weekend Edition Sunday on Aug. 28 from the deck of the country’s only floating post office, the 45-foot tugboat J.W. Westcott II, a delivery boat that has been operating in the Detroit River for almost 67 years.

The report, which can be heard here, captures a slice of life on the boat while detailing what it delivers, and the “not-so-high-tech” way it delivers. (Hint: It involves a bucket.)

The J.W. Westcott II, which has its own ZIP code, has indeed been operating for more than a half-century. But the company that operates it goes back a little further.

The J.W. Westcott Company has been in business for more than 140 years, making deliveries to the men working on the many boats that carry cargo up and down the Detroit River. During the automotive surge of the 20th century, the river became vital in transporting iron ore, steel, and limestone.

At its peak, the boat delivered more than 1 million pieces of mail per year to boats on the river. Today, it delivers roughly half that.

Liana Aghajanian, who wrote an in-depth profile on the company in July, says the J.W. Westcott II is known as the “7-11 of the Great Lakes,” because it is “open 24 hours, seven days a week from mid-April to December, with three shifts for a bevy of crew members who have one of the most unique jobs in the country.”

After much anticipation, The Million Dollar Duck is scheduled to make its Animal Planet debut on Sept. 14 at 9 p.m. Eastern Time.

The award-winning documentary film gives a “humorous and quirky” look at the competitive annual federal duck stamp art contest, the only juried art competition run by the U.S. government.

The subject of our latest cartoon caption contest is the 1969 6¢ Beautification of America stamp.

Here are the details on how you get your caption in the running.

What else is new on Linns.com?