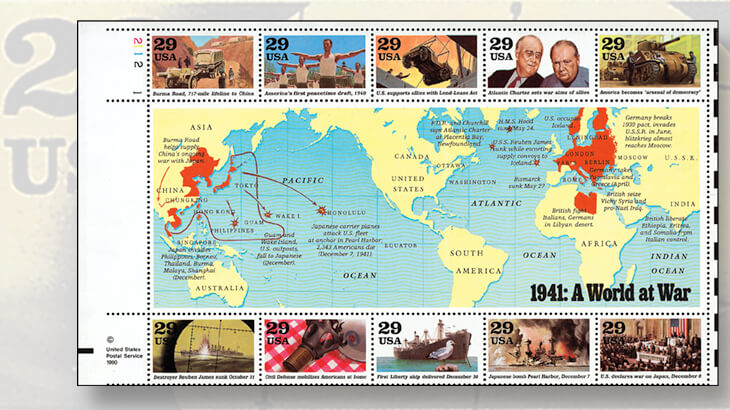 Stamps in the United States’ World War II series of 1991-95 prove that some people had underestimated Adolf Hitler. 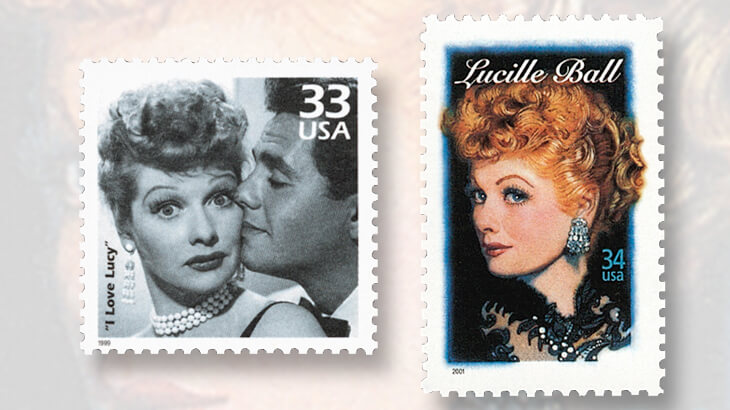 Lucille Ball, star of stage, screen and television, was told by her drama school instructor, “Try another profession. Any other.” She has been honored on two U.S. stamps. 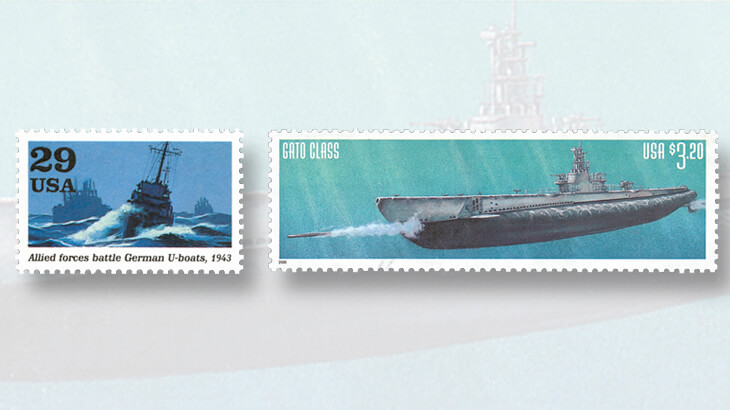 These two stamps, one about battling German U-boats and the other showing a U.S. submarine, prove that H.G. Wells was wrong in his prediction about them. 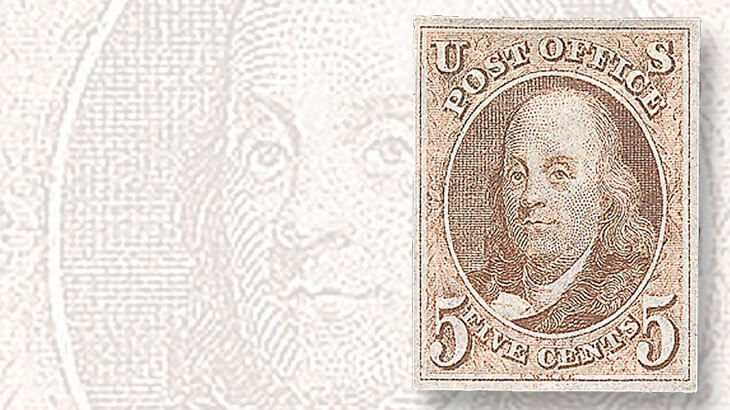 Benjamin Franklin, honored on United States Scott 1, was described by John Adams in a diary entry as a man of “very moderate abilities” who “knows nothing of philosophy.” 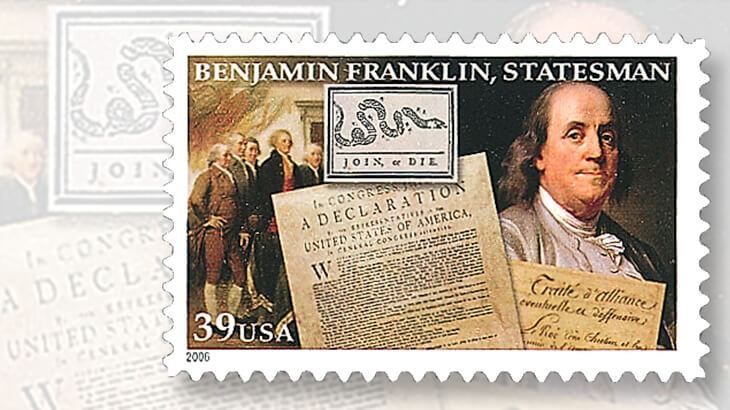 In a pamphlet published in 1760, Benjamin Franklin wrote that the uniting of the Colonies against the mother country was more than “merely improbable.” This stamp from the 2006 Benjamin Franklin issue features his role as a statesman. 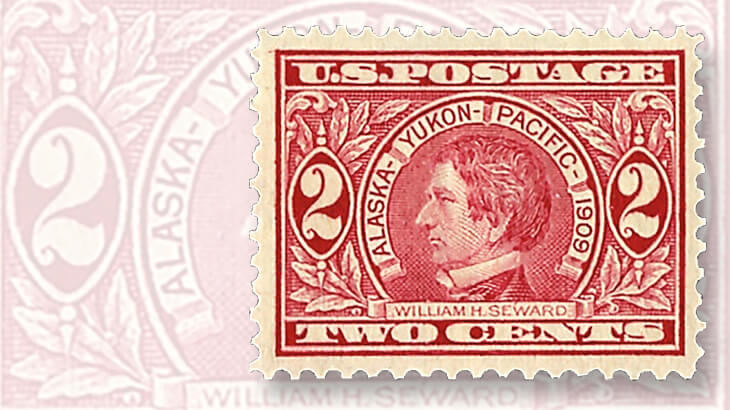 William H. Seward is pictured on the 1909 Alaska-Yukon-Pacific Exposition issue stamps. The purchase of Alaska from Russia while he was secretary of state was criticized at the time. 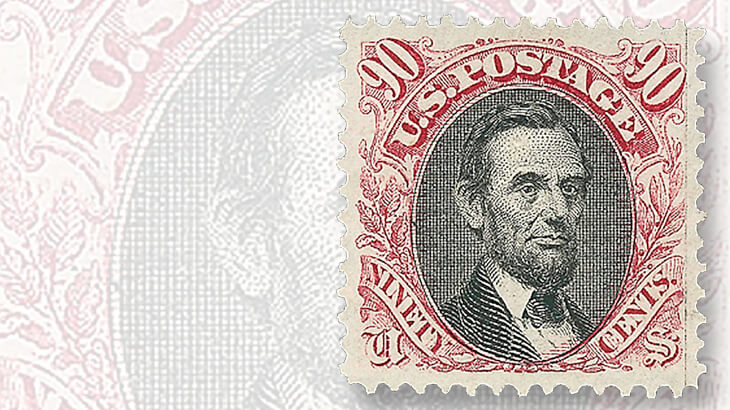 Newspaper editor Horace Greeley wrote in an 1864 editorial that President Lincoln could not win re-election. Among the many stamps honoring Lincoln is this one from 1869.
Previous
Next

It’s time for a new installment in my series on United States stamps that illustrate the folly of prediction and pronouncements that turned out to be wrong.

This series of U.S. Notes columns began in 1998 and has extended over seven installments. This is the eighth in the series.

Readers who would like the seven earlier columns can obtain them by sending $2.50 in mint U.S. stamps (which includes both copying cost and return postage) to me, John Hotchner, Box 1125, Falls Church, VA 22041-0125.

Benjamin Franklin is well known today as a man of letters, science, philosophy and public service, as well as for his diplomatic skills and for other categories of endeavor. He was honored on the first U.S. stamp issue of July 1, 1847, given equal billing with George Washington. Franklin appears on the 5¢ stamp (Scott 1) in this issue, and Washington on the 10¢ (2).

Yet no lesser a personage than our second president, John Adams, had this to say of Franklin in his diary entry for May 10, 1779: “He has very moderate abilities. He knows nothing of philosophy, but his few experiments in electricity.”

Talk about damning with faint praise. And as a prediction of how Franklin would be appreciated by history, Adams was completely off the mark.

As good as Franklin was, perfection is not given to any man.

In 1760, while he was the agent in London for several of the American Colonies, he published a pamphlet titled “The Interest of Great Britain Considered, With regard to Her Colonies, and the Acquisitions of Canada and Barbados.” Included was his flawed assessment of the potential for the Colonies to rebel against the mother country.

Franklin argued: “If they could not agree to unite for their defence against the French and Indians … can it reasonably be supposed there is any danger of their uniting against their own nation, which protects and encourages them, with which they have so many connections and ties of blood, interest and affection, and which ‘tis well known they all love much more than they love one another?

“In short, there are so many causes that must operate to prevent it, that I will venture to say, a union amongst them for such a purpose is not merely improbable, it is impossible.”

As can be seen on numerous U.S. stamps, that “impossible” uniting of colonial sentiment is precisely what happened. And curiously enough, Franklin was a significant player in that process.

In addition to Scott 1, many other U.S. stamps honor Franklin, including a 2006 block of four commemorating the 300th anniversary of his birth (Scott 4021-4024). The 39¢ stamps feature his roles as a statesman, scientist, printer and postmaster.

Like Franklin, Abraham Lincoln has been commemorated on many stamps, including the 90¢ high value of the 1869 issue (Scott 122).

As we know today, Lincoln ran successfully for a second term as president in 1864. With the Civil War dragging on, his popularity suffered and opposition candidates were relentless in their attacks.

They must have been convincing as no less than Horace Greeley, editor of the New York Tribune, stated on Aug. 14, 1864: “Mr. Lincoln is already beaten. He cannot be re-elected.”

Willliam H. Seward, secretary of state under Lincoln and also under Andrew Johnson, was the subject of an article in another New York City newspaper, The New York World. On April 1, 1867, it reported that the acquisition of Alaska had been formalized March 30, 1867, when Seward and Edouard de Stoekl, the Russian minister to the United States, signed the Alaska Treaty.

The editorial writers were not happy, stating that “Russia has sold us a sucked orange. Whatever may be the value of that territory and its outlying islands to us, it has ceased to be of any to Russia.”

It went on to say, “The purchase of the Russian territory renders it morally certain that we shall some day acquire British Columbia.”

Of course there are many “some days” in the future, but my own rash prediction is that I don’t see it happening.

Seward is commemorated on the 1909 2¢ Alaska-Yukon-Pacific Exposition issue (Scott 370).

Prediction in statecraft is chancy under the best circumstances. During wars and even the run-up to wars, it can be folly.

Nazi Germany, under the leadership of Adolf Hitler, invaded Poland in September 1939, the start of what would become World War II.

However, seven years earlier, in 1932, William C. Bullitt, the U.S. ambassador to Germany, wrote in a letter to President–elect Franklin Roosevelt: “Hitler’s influence is waning so fast that the Government is no longer afraid of the growth of the Nazi movement.”

If the Americans were fooled, so was the president of Germany, Paul von Hindenburg, who said in 1931, “Hitler [is] a queer fellow who [will] never become Chancellor; the best he [can] hope for [is] to head the Postal Department.”

Of course we know now that these were serious misreadings of the German political situation. Hitler rose to absolute power that allowed him to precipitate WWII, and to prove it, there are many U.S. stamps honoring the military services and legendary flag-rank officers and enlisted men, and there is the 1991-95 series marking the 50-year anniversaries of major events in the war.

Finally, evaluation of technology is always something of a minefield, but a particular lack of vision was shown by British writer and historian H.G. Wells, when he wrote in 1902: “[M]y imagination refuses to see any sort of submarine doing anything but suffocate its crew and founder at sea.”

This is an epic failure of imagination and a vote of no confidence in the ability of science to solve the problems. Jules Verne, 30 years earlier, had come closer to the truth in his novel Twenty Thousand Leagues Under The Sea.

Both American and German submarines (U-boats) are included on stamps in the aforementioned WWII series. In addition, the United States issued a set of five stamps March 27, 2000, devoted solely to submarines (Scott 3372-3377).

And to end on a lighter note, an early assessment of the potential of actress and comedienne Lucille Ball proved wrong. In 1927, the head instructor of the John Murray Anderson Drama School advised her: “Try another profession. Any other.”

Ball is featured on stamps in the Celebrate the Century and Legends of Hollywood series (Scott 3187l and 3523).

When American history and culture are featured on world stamps: U.S. Stamp Notes