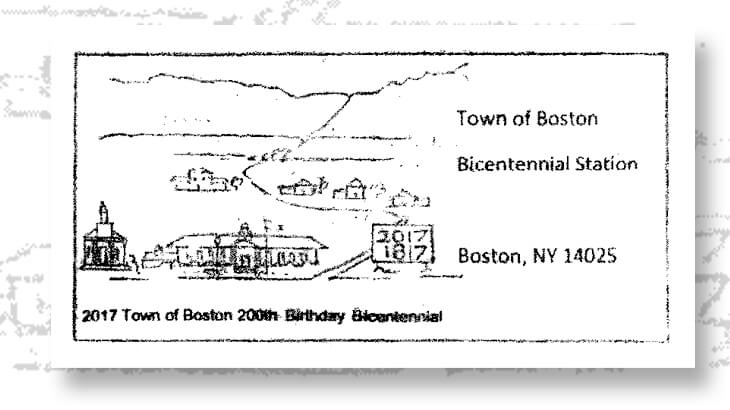 The town of Boston located in upstate New York will celebrate its bicentennial in 2017, and offers a pictorial “Bicentennial Station” postmark as part of the commemoration.

The town of Boston in western New York, roughly 30 minutes south of Buffalo and an hour south of Niagara Falls, will celebrate its 200th birthday in 2017 with “a full schedule of events that will run from winter 2016 through the end of 2017.” The planned events are free and open to the public.

A Winterfest 2016 celebration scheduled for Dec. 30 includes a ribbon cutting for the town’s new ice skating rink, and a fireworks display.

The town was formed April 5, 1817. According to the history published at the town’s website, an early law stated, “Any person who shall suffer a stalk of Canada thistle to bloom on his or her lot or farm shall pay a fine of fifty cents for each blossom to any person suing for the same.”

The published history notes that a mail route was established in 1820, and a Boston post office was opened at Torrey’s Corners.

Today there are two post offices on Boston State Road (one in North Boston), and the town’s population was 8,023 in the 2010 census.

The postmark commemorating the bicentennial, which has been granted a 90-day extension, shows a scenic view that includes the Boston Town Hall. To obtain this postmark, address your request to:

The following cancels are also available and have been granted 60-day extensions: