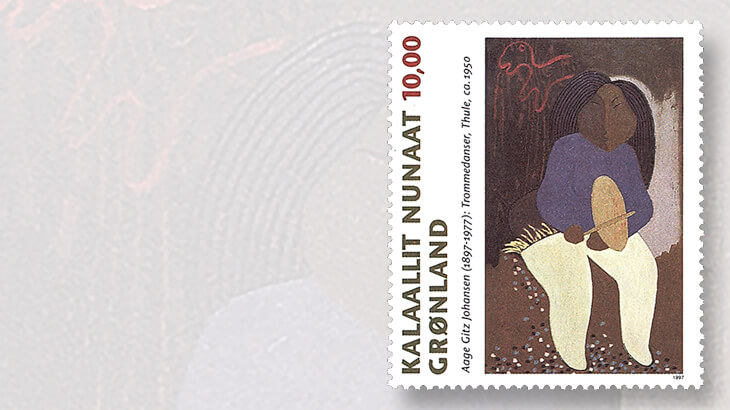 Aage Gitz-Johansen served as staff artist for the Danish North-East Greenland Expedition in 1938 and made several return visits. This 1997 stamp from Greenland marks the artist’s birth centenary and 20th death anniversary. 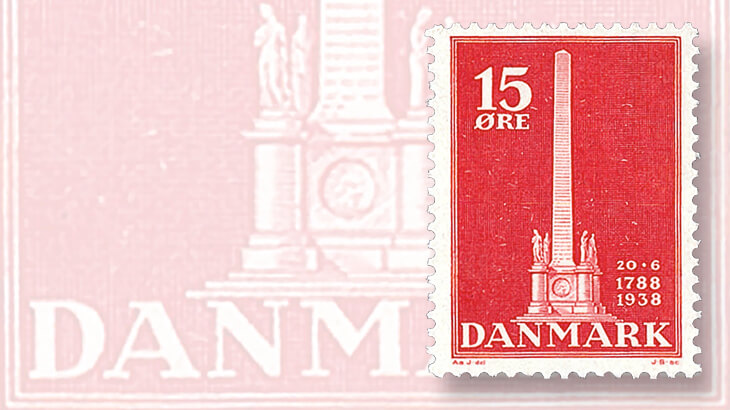 A competition sponsored by the Danish post office led to the design chosen for the 1938 stamp for the sesquicentennial of the reform ending serfdom in Denmark.
Previous
Next

Denmark is the smallest Nordic country, south of Norway and southwest of Sweden, both of which neighbors were part of a union with Denmark in the 14th century. Sweden seceded in 1523, and in 1814 Denmark ceded Norway to Sweden while retaining the Faroe Islands, Greenland, and Iceland. The latter became a republic in 1944, but the Faroes and Greenland are still autonomous constituent countries of Denmark.

Among the major events in Denmark’s political and economic history were the extensive agricultural reforms of the late 18th century, including changes in methods of farming and the status of those who did the work.

A royal decree on June 20, 1788, revised the historic form of Danish serfdom known as stavnsbaand, and the 150th anniversary of this decree, in 1938, certainly deserved postal recognition.

Stavnsbaand, a form of villenage or serfdom, began in Denmark in 1733 as a way to keep workers on the farms, when many were leaving to seek better lives in the cities. Estate owners had a duty to delegate men to military service, and so both the farms and the army were in trouble over the loss of workers.

Also known as adscription, stavnsbaand required bonded males between ages 14 and 36 (later changed to between 9 and 40 and then 4 and 40) to stay on the estate where they were born, unless they were able to buy their way out of the obligation. A system known as hoveri required the serf to cultivate the estate owner’s land as well as his own.

The Danish statesman Christian Ditlev Frederik, Count of Reventlow (1748-1827), himself the owner of a large estate, believed that freed labor would be better both for agriculture and the workers.

Appointed head of the exchequer in 1784, Reventlow used his new power to appoint a commission to study the crown’s own serfs. In 1786, he persuaded the crown prince regent, Frederick (ruling for his mentally ill father, King Christian VII), to extend the study to include the condition of all Denmark’s peasants.

A royal decree in 1787 modified the leasehold system to the benefit of the serfs, and the decree of June 20, 1788, began the process of abolishing stavnsbaand, with a transition period lasting until 1800 (due to fears that too-sudden change would disrupt society).

At first, the change affected only males under the age of 14; later, those over age 36; and finally, those who had already done military service. The hoveri system wasn’t abolished until Dec. 6, 1799.

In 1791, a public subscription among the people of Copenhagen was gathered to pay for a monument in that city, in tribute to the king and the end of adscription. Some Danish historians today interpret this movement to build the Frihedsstoetten (freedom or liberty statue) as an organized counterattack by those who hailed the reforms as the beginning of new personal and political freedoms, against the conservative landowners who strongly opposed the changes.

Crown Prince Regent Frederick laid the cornerstone for the statue in July 1792, on a plot outside the western ramparts of the city. The main designer of the monument was Nicolai Abildgaard, a painter, sculptor, and architect who had painted many works in the various royal palaces. The statue would be in the form of an obelisk more than 65 feet tall, made of red sandstone from the Baltic island of Bornholm, and resting on a base of Norwegian marble.

Inscriptions on the obelisk include a statement that, “The king commanded serfdom shall cease,” and an essay by poet Thomas Thaarup. Four female allegorical statues around the obelisk were the work of Abildgaard, Johannes Wiedewelt, Nicolai Dajon, and Andreas Weidenhaupt, and symbolize loyalty, civic virtue, bravery, and agricultural diligence.

The Frihedsstoetten was completed in 1797, but was renovated in 1850 and then taken apart and moved in 1909, making way for the construction of the first central railway station in Copenhagen. A copy of the statue was prepared by sculptor Jens Lund and erected in 1911, about 17 feet east of the original location. That version was renovated in 1998-99.

The Danish postal administration had been soliciting new stamp designs through competitions throughout the 1930s, and announced a contest for the intended Abolition of Villenage issue in January 1938.

Some contestants resubmitted designs they had sent in to the competition sponsored in 1937 by a Copenhagen newspaper, Berlingske Tidende. The newspaper had instructed entrants to submit a series of six designs, with the general purpose being to improve the quality of Danish stamp issues and allow artists to demonstrate their skills in this genre.

The newspaper received at least 1,500 designs for its competition; the post office’s contest specifically for the Villenage issue received 186. According to the wonderful Handbook of Danish Essays, Volume Two, 1920-1939 by William R. Benfield and Bruno Noerdam (published by Jay Smith & Associates, 2004), the first-place prize was awarded to Aage Johansen, “an advertising designer from Aarhus.” He won 500 kroner plus an additional 500kr because the design actually was issued as a stamp.

The design is very simple: only the obelisk, centered on a solid-color background.

Other submissions included detailed drawings of nearby buildings, a banner coming down from the sky, a parade of horsemen, and so on.

The Handbook of Danish Essays indicates that “Very little is known about Johansen,” but I believe that the stamp designer was the artist who adopted his mother’s birth name as part of his own and became known as Aage Gitz-Johansen (1897-1977), born in Odense in central Denmark, and initially a zoologist by university training. He then studied art in Paris and Copenhagen and edited an art magazine while working as a book illustrator, designing stage scenery, and entering several art exhibitions.

Johansen’s design was issued as a 15-ore stamp on June 20, 1938, 150 years to the day after the royal decree beginning the reform of the stavnsbaand system.

Winning the design contest was not the most exciting thing that happened to Aage Gitz-Johansen in the summer of 1938. He also served as staff artist for the Danish North-East Greenland Expedition, on a journey that literally changed the course of his art. He returned to Greenland repeatedly for the rest of his life and focused on woodcuts and other art media to depict the scenery, culture, legends, and sagas of the country.

Examples of his works are in museums worldwide, and two of his paintings appear on Greenland Scott 325-326, stamps issued in 1997 for the artist’s birth centenary and 20th death anniversary.

The Scott Classic Specialized Catalogue of Stamps and Covers 1840-1940 calls the 1938 stamp, Scott 262, the “Emancipation Column” design. It was engraved by Johannes Britze, who engraved all the recess-printed stamps for Denmark from 1933 until the end of World War II, as well as some issues for Greenland, Iceland, and Sweden. Britze also had submitted a design in the contest for the 1938 stamp, and won second prize. The stamp was printed in scarlet ink and perforated gauge 13.

The Scott Classic Specialized catalog values the Emancipation Column stamp at only 50¢ unused or used, with a modest increase to $1.25 for a mint never-hinged example.