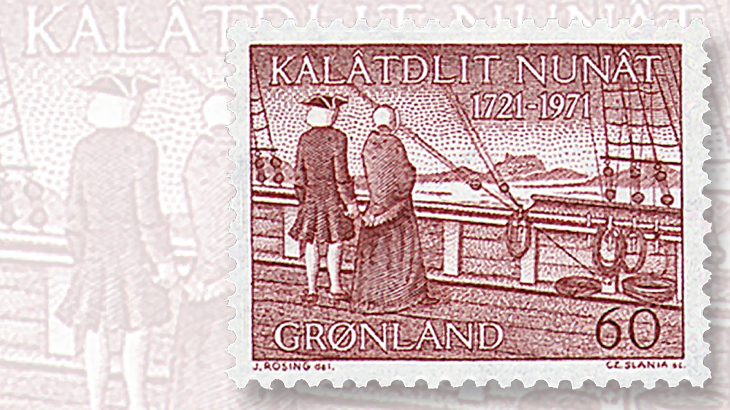 Missionaries Hans Egede and Gertrude Rask founded the village of Godthaab, now called Nuuk and serving as the capital of Greenland. 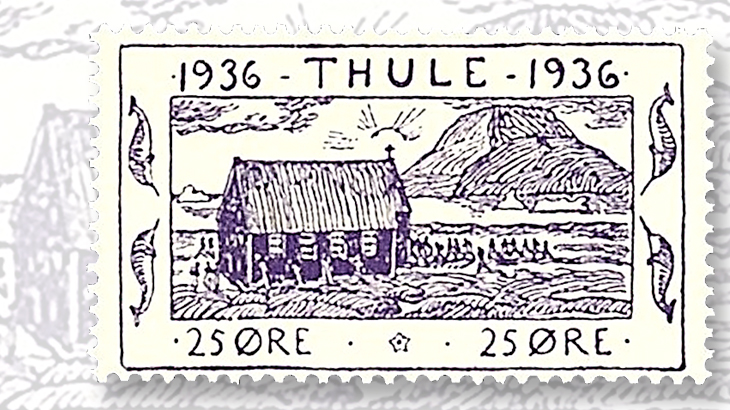 This local stamp, unlisted by many stamp catalogs, was issued in 1936 in Thule, Greenland, now known as Qaanaaq. 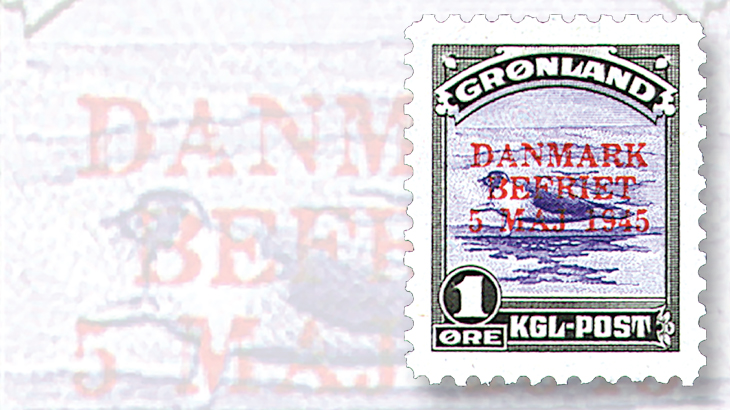 Greenland overprinted some of its stamps at the end of World War II with a message celebrating Denmark’s liberation from German occupation. 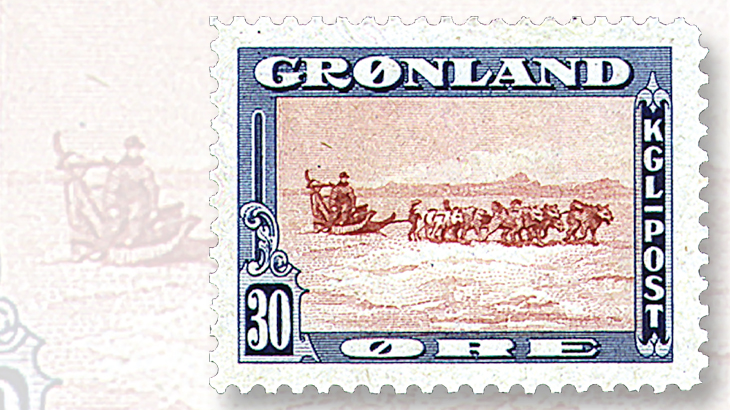 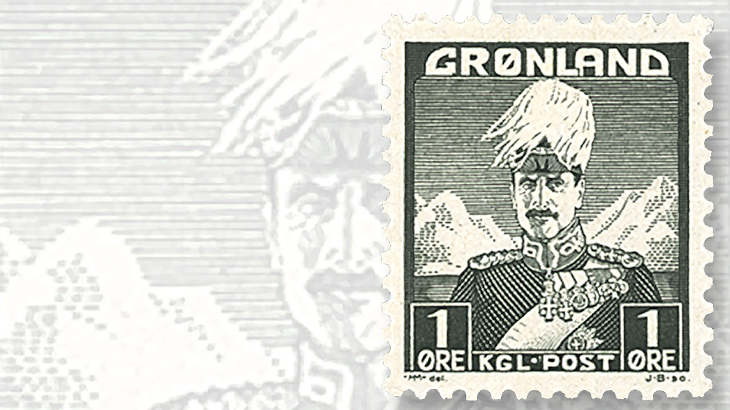 As part of Denmark, Greenland pictured the Danish king, Christian X, on its first regular postage stamp, issued in 1938. 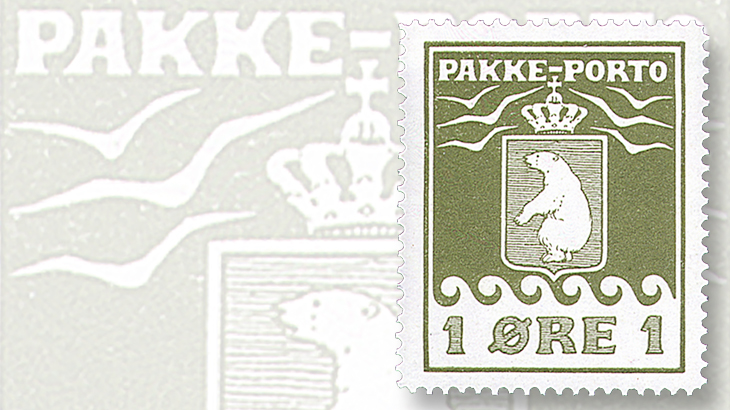 Though not a regular issue, Greenland’s 1905 parcel post stamps are considered its first stamps. The well-known design shows a polar bear and the Greenland arms. 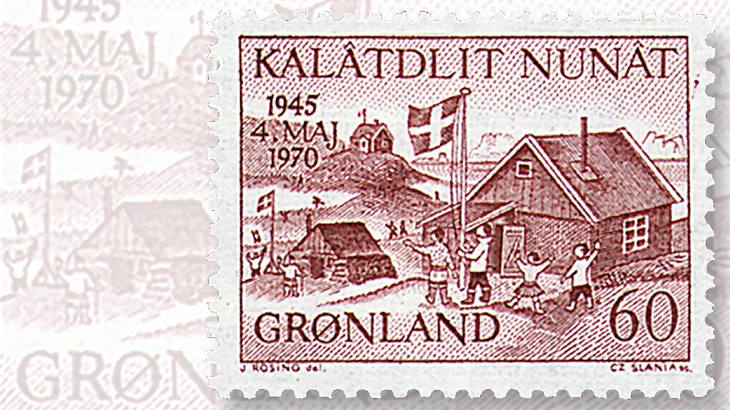 Getting to know something about almost every country that has ever existed is one of the benefits of collecting stamps from around the world. The first step is finding some stamps that spark your interest, and feeding that interest surely will include some research in global geography.

Have you browsed your albums lately and found lots of empty pages for some of the countries? Well, that is what happened to me when I realized that very few stamps from Greenland were to be found in my album.

Quick fix: Search for a packet or collection of stamps for the country that needs some bolstering. Buy it or swap for it and then enjoy properly filling the empty places in your album.

My little packet of Greenland’s stamps led to delightful fun, and even came with a surprise, as I will explain later.

The first step was to thumb through the Scott Standard Postage Stamp Catalogue to learn about Greenland’s stamps and the subjects on them. Greenland’s first regular stamp issue, from 1938, has a denomination of 1 ore and features a portrait of King Christian X against a background of mountains that look oddly like angel wings on the uniformed king.

Christian X was king of Denmark and Iceland, but what was his status for Greenland? Research definitely was called for.

The history of Greenland is fascinating. Erik Thorvaldsson, a Norwegian Viking known as Erik the Red, founded the first Norse settlement in Greenland in 982. Shortly thereafter, other Norwegian settlements were established in the southern part of Greenland. In the 15th century, the colonies deteriorated and the last vessel from Greenland went back to Norway.

In 1814, Greenland was taken by Denmark, but Danish sovereignty resulted in a dispute with Norway.

Some of the Greenland stamps honor those early colonies. For example, a 60o stamp issued in 1970 (Scott 76) illustrates the 1945 liberation celebration in Jakobshaven, which had been founded by Jacob Severin in 1741 as a trading post. Jakobshaven is now known as Ilulissat and is the third largest city in Greenland.

Ilulissat is the Greenlandic word for icebergs, and those are the local attraction that draws tourists from all over the world.

Missionary Hans Egede and his wife, Gertrude Rask, are shown arriving in Greenland on a 60o stamp issued in 1971 (Scott 77). In 1728, the couple founded the colony of Godthaab (“Good Hope”), now known as Nuuk, Greenland’s largest city and its capital.

Delving deeper into the Greenland listings in the Scott Standard catalog reveals that the first Greenland stamps actually were issued in 1905, and are parcel post stamps. “Pakke-Porto” at the top of the stamp translates to “package postage.” At first, the parcel post stamps were printed by typography and the perforations have various gauges, from 10 to 11 or 11½ or 12 (see the Scott Standard catalog for details).

All of the Greenland parcel post stamps share the same design: the arms of the country, with a polar bear in prominent position. The stamps are difficult to find used and even more challenging to find used on cover.

Scott 15, issued in 1945 and pictured nearby, is one of the coolest Greenland stamps — pardon the pun. The 30-ore stamp has a beautiful blue frame surrounding a vignette (central image) of a dog team mushing its way over snow and ice.

Denmark was occupied by Germany for much of World War II, beginning on April 9, 1940, leaving Greenland vulnerable. On April 9, 1941, Denmark signed an agreement with the United States allowing the presence of U.S. troops in Greenland, making it a de facto protectorate. After the United States entered the war, many radio and weather stations and other military outposts were established on the island.

When the war was over, Greenland overprinted Scott 10-18 to celebrate the liberation of Denmark: “Danmark Befriet 4 Maj 1945” (Denmark freed May 4, 1945). The overprinted stamps are cataloged as Scott 19-27.

Today Greenland is a sovereign state within the Kingdom of Denmark.

And now for the surprise mentioned earlier. The last illustration shows one of five stamps that were sent along in my packet of Greenland stamps. It looks like a postage stamp, but the name on it — Thule — does not appear among the Greenland listings in the Scott Standard catalog.

An Internet search for Thule first brought up the website for the U.S. Air Force Base at Thule, 947 miles from the North Pole. It is home to the 821st Air Base Group, responsible for air support within the Thule Defense Area. It also hosts the 12th Space Warning Squadron, which operates a Ballistic Missile Early Warning System to track intercontinental ballistic missiles launched against North America.

Further online investigation of Thule revealed that Thule is now known as Qaanaaq (pronounced kah-NAHK). The village lies on the northwest side of Greenland and is the most northerly permanent human settlement on Earth. Within the Arctic Circle, Qaanaaq is dark for half of the year, and in constant daylight for the other half. Qaanaaq residents are primarily Inuit people who depend on two cargo ships arriving each year, as well as hunting and fishing for food. You can visit Qaanaaq on YouTube.

But what about that 25o Thule stamp from 1936? More Internet searches led to the Quora question-and-answer website and information that the five Thule stamps were privately printed by the Thule Committee to mark the 25th anniversary of the Thule trading station. The stamps were issued in memory of Dr. Knud Rasmussen (1879-1933), a polar explorer and anthropologist born in Jakobshaven/Ilulissat.

The German Michel catalog identifies the stamp as showing “Station Thule.” It is part of a set of five private issues from 1935-36 that includes a 10o stamp for Knud Rasmussen, 15o Danish Flag, 30o Walruses, and 45o Cape York.

Learning about Greenland and the village of Qaanaaq through stamps was great fun. See where your album has some gaps and give yourself a new challenge!