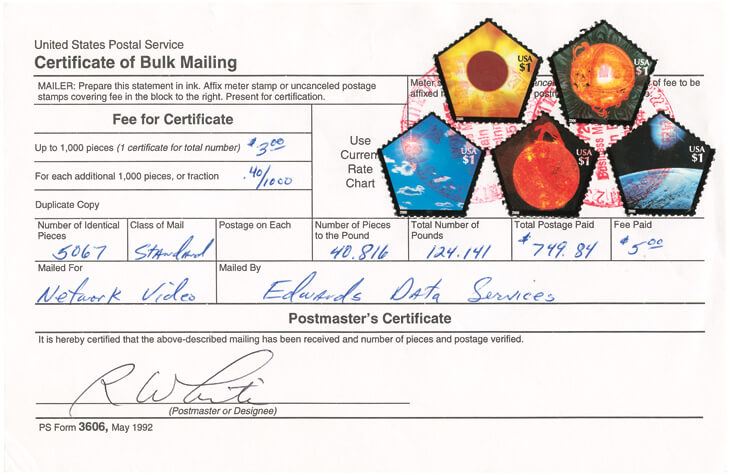 Five $1 Exploring The Solar System stamps exactly satisfied the $5 fee on this certificate of bulk mailing for 5,067 pieces sent via standard mail. Up to 1,000 pieces required a fee of $3, and each additional 1,000 pieces or fraction cost 40¢. 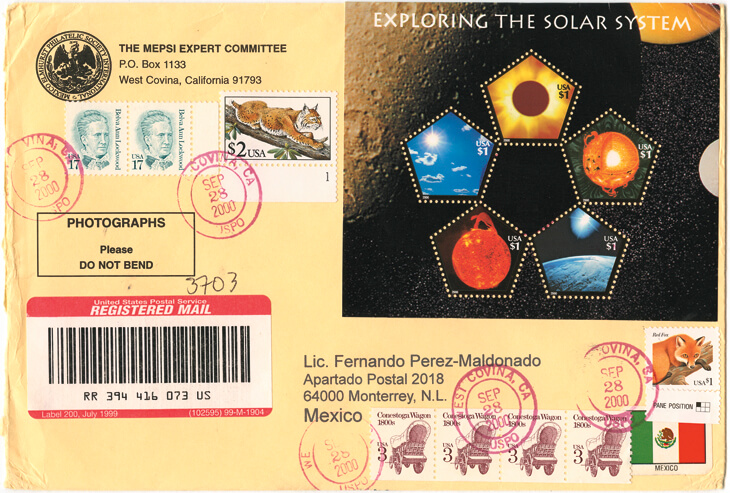 An intact Exploring The Solar System souvenir sheet (Scott 3410) paid most of the postage on this cover mailed Sept. 28, 2000, from West Covina, Calif., to Monterrey, Nuevo Leon, Mexico.
Previous
Next

Among the highlights of that show was the issuance of 15 stamps in a set of five souvenir sheets (Scott 3409-3413).

Titled Space Achievement and Exploration, the set features a number of firsts in U.S. stamp production: the first U.S. stamps with a hologram, the first circular U.S. stamp, and the first pentagonal U.S. stamps.

(For those keeping track, the first U.S. issues of any kind to incorporate a hologram are two stamped envelopes issued in 1989 and 1990.)

These small print quantities, combined with rather lackluster sales, eventually pushed up the values of the sheets in the retail marketplace.

Today, a complete set of five sheets is valued at $135 in the Scott Specialized Catalogue of United States Stamps and Covers. An uncut Space Achievement press sheet is valued at $140.

The stamps feature different dramatic images of the sun. My favorite is the top stamp in the sheet, which pictures a total solar eclipse with a halo-like corona.

In addition, the pentagonal arrangement of the five stamps and the congruence of their shape with the number of stamps in the sheet appeal to my sense of symmetry and balance. For sheer visual effect, this nifty sheet is hard to beat.

In the 2000 Linn’s U.S. Stamp Yearbook, George Amick writes that the sheet selvage “depicts a NASA montage consisting of the ringed planet Saturn and a few of its moons, with the heavily cratered Dione in the foreground.”

Just two errors are known: an imperforate sheet (Scott 3410f), and a sheet with a hologram from one of the $3.20 Escaping The Gravity Of Earth stamps applied (3410g).

The imperforate sheet is valued at $2,000 in the Scott U.S. Specialized catalog; the sheet with an errant hologram is dashed because there isn’t enough market data to establish a value at present.

As you might guess, the Space Achievement issue was targeted directly at stamp collectors.

For all practical purposes, this means the vast majority of Space Achievement postal history is philatelic in nature. Even so, there aren’t that many covers out there.

Illustrated nearby is a representative philatelic use that I find particularly appealing because it is franked with an intact Exploring The Solar System sheet.

Due to space limitations, the sheet selvage was folded over the top of the envelope when it was affixed.

The expert committee of the Mexico Elmhurst Philatelic Society used the sheet in combination with other stamps to send pictures (as disclosed on the U.S. Customs form attached to the back) to the recipient in Monterrey, Nuevo Leon, Mexico.

The cover was mailed from West Covina, Calif., Sept. 28, 2000, a little more than two months after the sheet was officially issued. Receiving handstamps on the back indicate the cover arrived at its destination in Monterrey Oct. 10.

Although not visible in the picture, a West Covina postmark applied to the central pentagonal selvage just barely ties the sheet to the envelope. Traces of purple ink from the postmark can be seen in some of the perforation holes of the central selvage.

Total postage of $8.46 paid for the international registration fee of $6 and first-class postage of $2.45 for a letter weighing not more than 6 ounces. In this case, the sender settled for a 1¢ convenience overpayment.

Also pictured here is a rather more unusual use of the five $1 Exploring The Solar System stamps.

It is a USPS certificate of bulk mailing franked with the five stamps, which were carefully removed from the sheet before being affixed.

As can be seen on the certificate, 5,067 identical pieces of mail with a total weight of slightly more than 124 pounds were sent via standard mail. The sender, Edwards Data Services, paid postage of $749.84.

In this case, those 67 pieces beyond 5,000 pushed the total certificate fee to an even $5.

Two indistinct strikes of a USPS business mail postmark tie the stamps to the certificate. The month and day appear to be Nov. 9, but only the first two digits of the year, 20, are readable.

Do you have some interesting on-cover uses of the Space Achievement and Exploration stamps? If so, I’d enjoy learning more about them. Write to Dollar-Sign Stamps, Box 4129, Sidney, OH 45365-4129, or fire off an email to csnee@amosmedia.com.