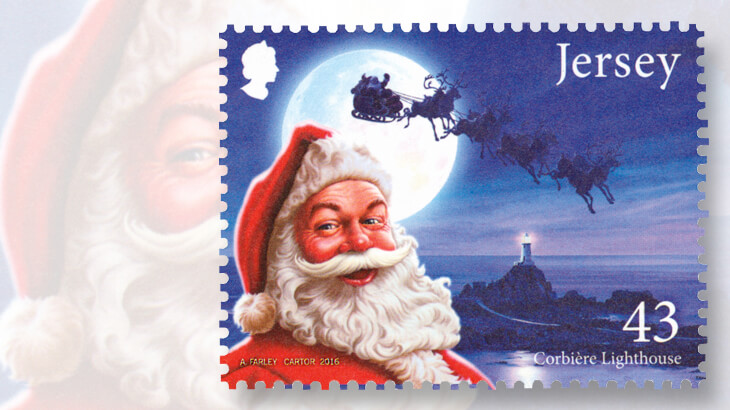 Father Christmas, or Santa Claus, is seen guiding his sleigh and flying reindeer over Corbiere Lighthouse on this 43-penny Christmas stamp issued Nov. 21 by Jersey Post. 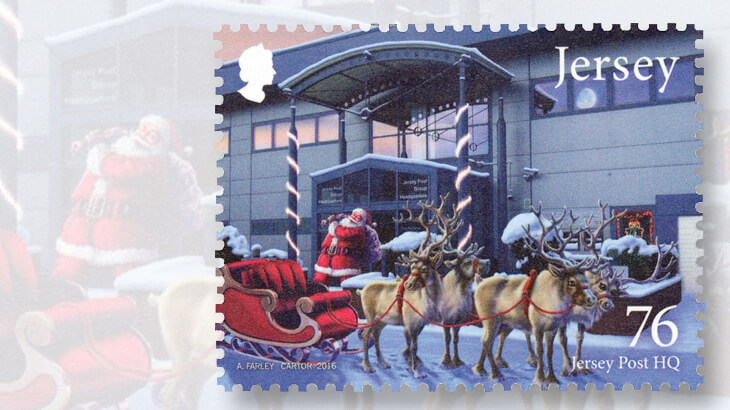 The 76p Christmas stamp shows Father Christmas stopping at Jersey Post headquarters to collect a sack of presents.
Previous
Next

The new-issue announcement from Jersey Post describes the illustrations by Andrew Farley as depicting a jolly Father Christmas “in his traditional red suit, collecting and delivering parcels all over the Island.”

The stamps show some of the island’s iconic landmarks. For example, the 43-penny low denomination of the set of eight stamps and a souvenir sheet features Corbiere Lighthouse. The design also includes two images of Father Christmas: one in the foreground, and a silhouette of him in his reindeer-pulled sleigh in the background.

One of the stamps, the 76p denomination, even shows Father Christmas stopping at Jersey Post headquarters to collect a sack of presents.

The souvenir sheet, which contains a single £2.92 stamp, depicts him delivering toys inside a farmhouse.