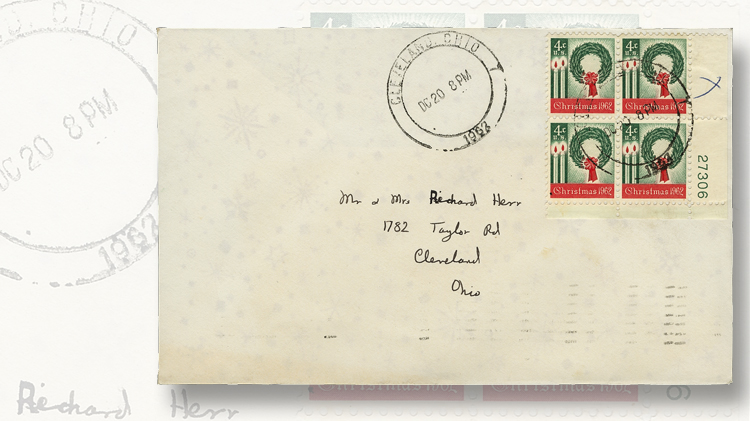 A plate-block use for the 1962 Christmas stamp will be hard to find because it pays four times the basic first-class rate, with no special services requested, on this Cleveland-to-Cleveland cover. 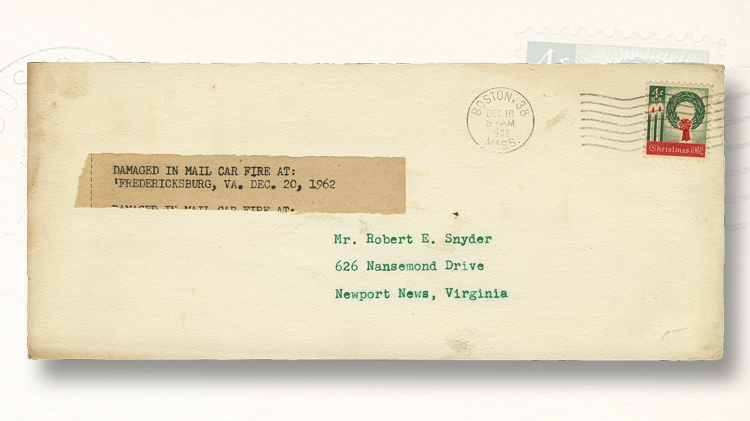 This cover, bearing a 1962 Christmas stamp, was in a mail car fire at Fredericksburg, Va., on Dec. 20, 1962. Such disaster mail is unusual and a nice addition to a Christmas stamp collection.
Previous
Next

If there is a forgotten aspect of collecting United States Christmas stamps, it is their use on cover.

An interesting postal story told by a cover rarely adds anything to the Christmas theme, but collectors have to be mindful that stamps are issued to be used. Thus, covers are part of their story.

A couple of examples may give you a sense of what might be included. The first U.S. Christmas stamp was issued Nov. 1, 1962 (Scott 1205). The 4¢ Wreath and Candle stamp is colorful, but was obviously designed to put the camel’s nose inside the tent.

Its religious connotation is muted, but there were still lawsuits to try to bar the Post Office Department from issuing it. Needless to say, they failed, and with legal victories in hand, subsequent Christmas stamps took on a much more religious flavor.

This first Christmas stamp was exceedingly popular, and the Bureau of Engraving and Printing ultimately produced almost 862 million of them.

Though the vast majority, as with all postage stamps, ended up in garbage cans and recycling bins, there are interesting covers to be found in collections, dealer stocks, and accumulations of family mail. Here are two 1962 uses that would be hard to duplicate.

Unless the contents of this cover were very heavy, four times the normal first-class rate would not be necessary.

Also, there is no evident need for airmail because the letter was sent from Cleveland to Cleveland, and no special services, such as special delivery or certified mail, are indicated. This makes me think that the cover was either sent to or was from a stamp collector.

The second cover was sent from Boston, Mass., on Dec. 18, 1962, but on its way to Newport News, Va., it was damaged in a mail car fire, per the added paste-on intended to explain a delay and the singe marks at upper left and on the back.

Both of these covers were plucked out of dealer boxes at modest prices.

I am sure there are many more interesting usages of this and subsequent Christmas stamps still to be found.