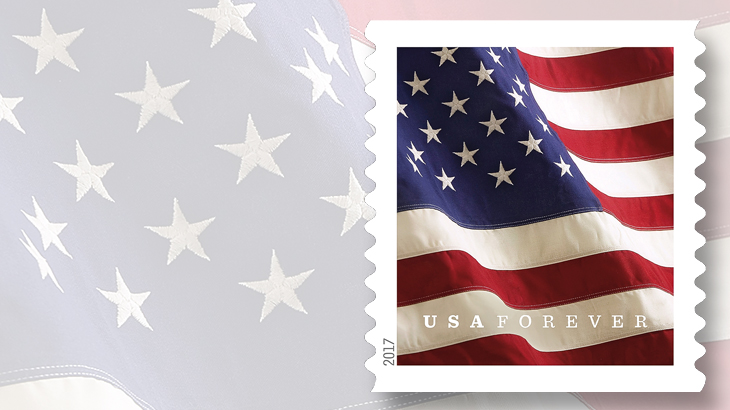 The 2017 Flag forever stamp will be issued Jan. 27 during the Southeastern Stamp Expo just outside of Atlanta, Ga.

The United States Postal Service has announced that its newest Flag stamp will be issued Jan. 27 in Norcross, Ga., a suburb of Atlanta.

The nondenominated (47¢) forever stamp will be issued in panes of 10 and 20, described by the Postal Service as booklets, and in coil format. Coil sizes were not revealed.

The new stamps will be welcomed with an 11 a.m. ceremony during the Southeastern Stamp Expo, taking place at the Hilton Atlanta Northeast, 5993 Peachtree Industrial Blvd., Norcross, GA 30092. The stamp show, hosted by the Southeast Federation of Stamp Clubs, runs from Jan. 27 to 29.

The design on the definitive stamp features a detail of Tom Gill’s photograph of a billowing United States flag. The stamp was designed by Greg Breeding with art direction by Terrence W. McCaffrey, the former manager of USPS Stamp Development, who retired from the Postal Service in December 2010.

Breeding and McCaffrey also claimed design credits for the Flag forever stamps issued Jan. 26, 2016 (Scott 5052-5055). In response to a question from Linn’s Stamp News, the Postal Service confirmed that the 2016 Flag stamp was a design project McCaffrey worked on prior to his retirement.