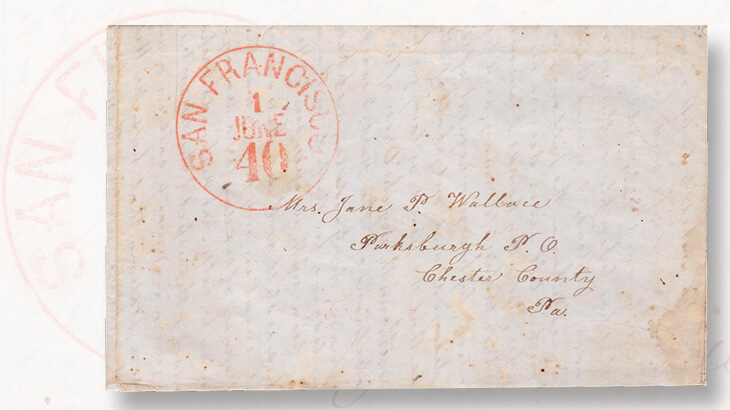 This otherwise unassuming cover contains a four-page letter sent in 1850 by Maria Chamberlain, one of the earliest missionaries in Hawaii, to her sister in Pennsylvania. The postmark indicates that the cover entered the U.S. mail in San Francisco. 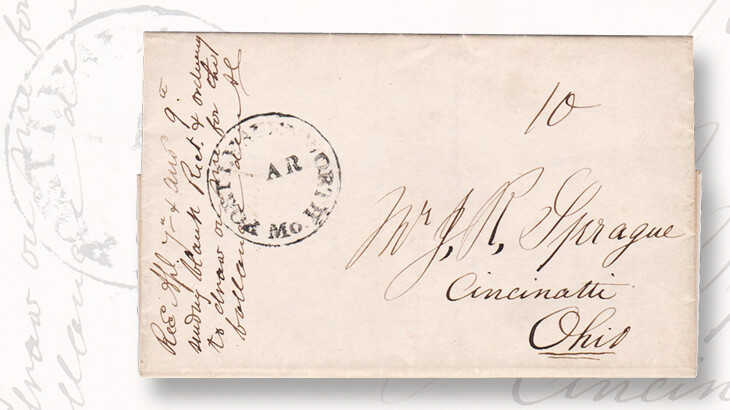 Mail from western forts in the 19th century, such as this scarce 1848 folded letter from Fort Childs (in present day Nebraska), was normally carried outside the postal system until it reached a post office, often the one at Fort Leavenworth, Mo. (now Kans
Previous
Next

“You can’t tell a book by its cover.” This is an adage I grew up with.

Paraphrased it also applies to postal history. You can’t tell the interest of a cover until you read the contents of the cover.

Many covers that appear ordinary on the outside contain enclosures that are significant to the overall value of the cover.

I can think of four reasons contents enhance a cover: first, if the inside letter was written by an important person, such as a signer of the Declaration of Independence or a president; second, if the letter has historical importance; third, if the contents are decorative, such as a patriotic letter sheet or an ornate letter head; and fourth, if the letter originated from somewhere other than where the postmark would indicate and was carried outside the mail to a post office.

In this month’s column, I am discussing two covers that were carried outside the mail at some point during their journey.

The third ship arrived on March 30, 1828. On board was Maria Patron, who married Levi Chamberlain later that year.

They subsequently had eight children and ministered to the Hawaiians during their marriage. In 1849, Levi died after a long illness.

Shown nearby is a cover that contains a four-page letter datelined Honolulu, April 20, 1850, which Maria wrote to her sister in Pennsylvania talking about her husband’s death.

At this time, there was no Hawaiian post office; it opened in the fall of 1850.

Before that, the mail from Hawaii was carried by ship usually to the northeast United States, where it entered the mail and was carried to its destination.

On Feb. 28,1848, William Van Voorhies arrived in San Francisco to set up the United States postal services in the new California Territory. After this was accomplished, mail from Hawaii could be carried to San Francisco and enter the mail there.

The cover from Maria shown here was then carried by a ship to San Francisco where it entered the mail and received a SAN FRANCISCO/1/JUNE/40 postmark, indicating payment the 40¢ transcontinental rate. It was then sent on to Pennsylvania.

In 1804, Lewis and Clark began their exploration of the newly acquired lands of the Louisiana Purchase. They started their expedition at St. Louis and proceeded up the Missouri River, then the Platte River, then across the Rocky Mountains finally arriving at Astoria, Ore., on the Pacific Coast.

This historic adventure was aided by the Indians along the way who provided valuable assistance by showing and guiding them through the passages necessary to reach the ocean. By and large the Indian tribes were friendly and extremely helpful.

The awareness of an enormous area to be settled and developed soon encouraged settlers to move west to improve their lives. This movement of people became a flood as wagon trains began moving across the Great Plains in large numbers with no respect for the original inhabitants of the area, the Indians.

The settlers would violate sacred areas, displace villages and at times massacre populations. The Indians retaliated, and it became dangerous to cross these areas.

The Army was sent to protect the settlers during their travels, and many forts were created along the route.

One of the most important forts was Fort Kearny, near the Platte River in present day Nebraska. It was originally garrisoned in 1848 as Fort Childs, named after Thomas Childs, a colonel in the Mexican-American war.

The name was changed in late 1848 to Fort Kearny, named after Col. Stephen Kearny who had made expeditions in the area for the War Department.

Mail from western forts was normally carried outside the postal system until it reached a post office, often the one at Fort Leavenworth, Mo. (now Kansas).

Illustrated here is a cover datelined Fort Childs Dec. 30, 1848 (it was still being called Fort Childs, probably because the directive to change the name hadn’t arrived ), from the commander of the Fort, Capt. C.F. Ruff, asking for a settlement of financial affairs for one of his soldiers, Pvt. John Morris.

The cover was carried to Fort Leavenworth, postmarked March (date illegible), 1849, rated for postage with a manuscript 10[¢] (due), and sent to Ohio. Any cover from Fort Childs is scarce.

These are two examples of important postal history items that were not apparent from the outer wrappers.

I hope you will read the contents of any old mail that comes your way in the future. You never know what you might find inside.