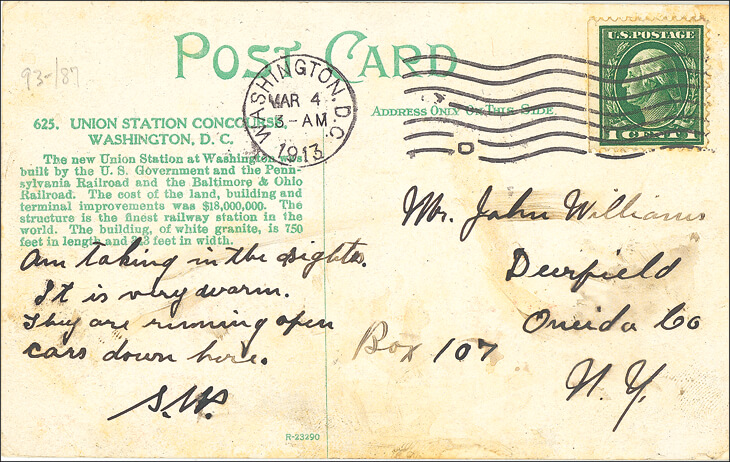 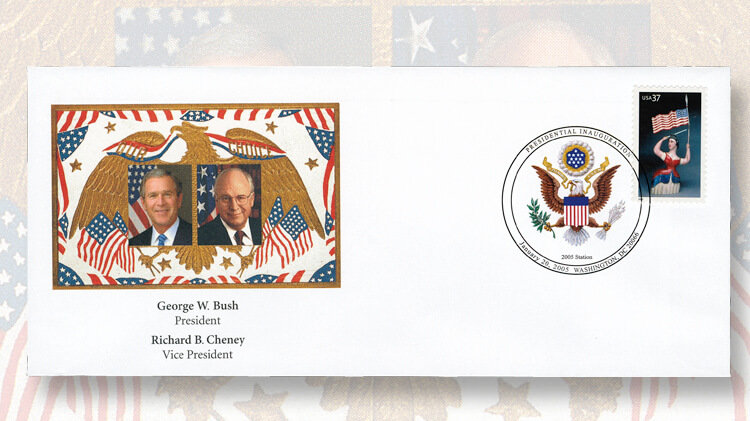 In 2005, the U.S. Postal Service marketed what it described as its first “keepsake” inaugural cover for George W. Bush’s second inauguration. The cachet pictured both President Bush and Vice President Dick Cheney. 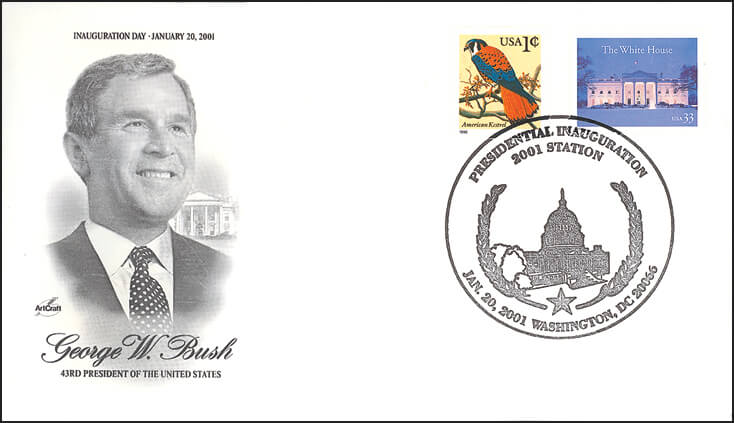 The United States Capitol is featured in the special Presidential Inauguration postmark used in Washington, D.C., for the swearing in of George W. Bush as the 43rd president of the United States. 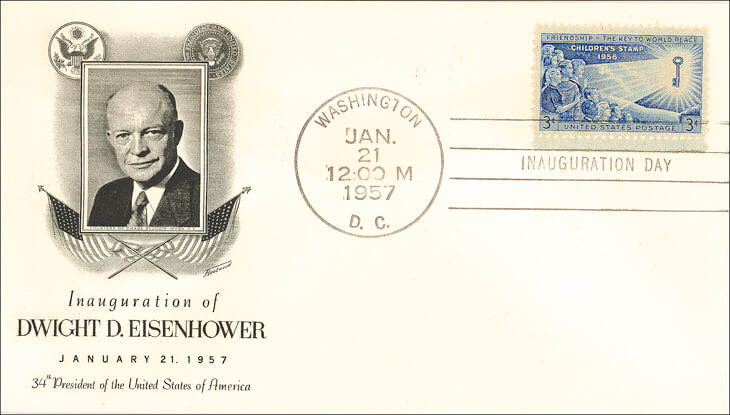 The words INAUGURATION DAY first appeared within the killer bars of an inaugural cancellation in 1957, for Dwight D. Eisenhower’s second-term inauguration. 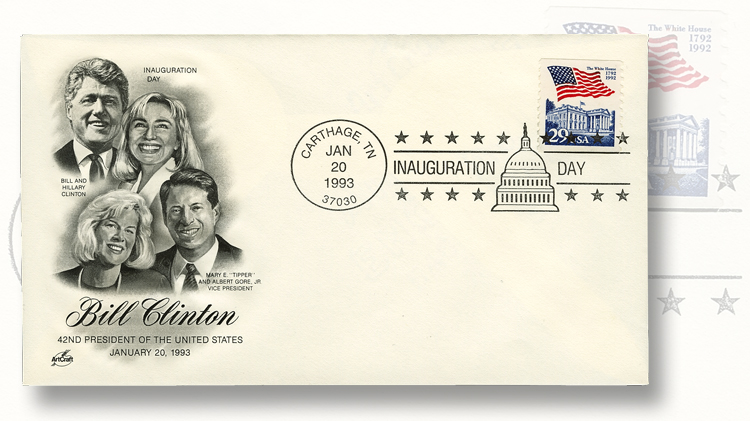 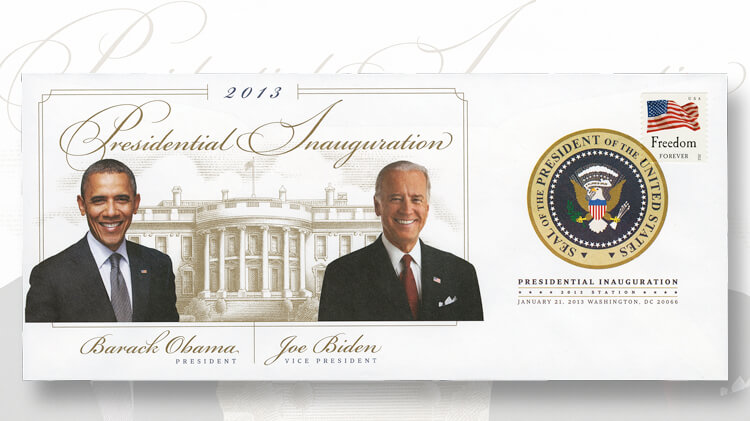 At noon on Jan. 20, Chief Justice John Roberts will administer the presidential oath to newly elected President Donald J. Trump, who will become the 45th president of the United States. The swearing-in ceremony will take place at the U.S. Capitol, which recently underwent a $60 million, multiyear restoration project.

Collectors interested in cancellations and covers won’t want to miss the opportunity to obtain the special Inauguration Day postmarks that will be offered by the United States Postal Service.

Details on the Inauguration Day 2017 postmarks and cacheted covers weren’t available at the time of this writing, but we can take a trip down memory lane about what has been available for past presidential inaugurations.

Beginning in 1957, the U.S. Post Office Department and, since 1971, the USPS have offered a special commemorative cancellation with the words “INAUGURATION DAY” for each presidential inauguration. It is likely that the Postal Service will offer a similar cancellation for the 2017 inauguration, postmarked Washington, D.C.

The first cacheted inaugural covers were created for Herbert Hoover’s inauguration on March 4, 1929. Typically, these early cachets were applied using a rubber handstamp. The covers were canceled in Washington, D.C., or sometimes in the cachetmaker’s hometown.

When Franklin Delano Roosevelt was sworn in on March 4, 1933, as the 32nd president of the United States, numerous commercial and private inaugural covers were produced. FDR was an avid stamp collector, and with a stamp collector in the White House, cacheted covers commemorating his inaugurations flourished.

Inaugural covers were postmarked not only in Washington, D.C., but also in the Minnesota towns of Franklin, Delano, and Roosevelt; Hyde Park, N.Y., Roosevelt’s birthplace; and on various ships.

Cachets frequently were added to the covers after the covers were canceled.

During FDR’s three full terms of office, cachets evolved from simple handstamped designs to intricately engraved or hand-painted cachets, and the number of cachetmakers grew.

A four-killer-bar cancellation was used in Washington, D.C., on Inauguration Day Jan. 20, 1953, when Dwight D. Eisenhower was sworn in as the 34th president of the United States. Eisenhower’s second term of office began Jan. 20, 1957, but because the date fell on a Sunday, most covers were postmarked Jan. 21. This marked the first time the words INAUGURATION DAY appeared within the killer bars of a U.S. postmark.

A cover shown nearby was canceled in Carthage, Tenn., the hometown of Al Gore, who served as vice president during the administration of President William Jefferson “Bill” Clinton.

This postmark was used on commercial covers as well. An example is shown nearby.

The USPS ignited the ire and suspicion of cachetmakers in 2005 when it marketed what it described as its first “keepsake” inaugural cover for George W. Bush’s second inauguration. The cover was looked upon by cachetmakers as the Postal Service’s first step toward producing official first-day covers.

As can be seen here, the four-color cacheted cover again pictured Bush and Cheney, but this time the special color postmark pictured an image of the presidential seal and the inauguration date Jan. 20, 2005. A randomly selected 2003 37¢ Old Glory stamp was affixed to each cover and was tied by the special postmark. The cover was sold nationally for $5.95, and was also packaged with a souvenir booklet of Old Glory stamps for $11.95.

For the swearing in of President Obama for his second presidential term, the Postal Service offered an Inauguration Day postmark in Washington, D.C., dated Jan. 21. Because Jan. 20 fell on a Sunday in 2013, a private swearing-in ceremony was held on Jan. 20, and the public ceremony took place on Monday, Jan. 21.

Among the scarcest inaugural covers are those created following the death of a president while in office. Cachetmakers and collectors are caught unprepared, and few covers have been prepared and canceled on those dates.

As an example, Vice President Harry S. Truman was sworn in as the 33rd president of the United States only two hours after President Roosevelt died April 12, 1945, at 4:35 p.m. Inauguration covers dated April 12 are scarce.

Similarly, the nation was in shock when President John F. Kennedy was assassinated Nov. 22, 1963. Covers may exist for the swearing in of Lyndon B. Johnson, but they also are scarce.

Politics aside, collecting inaugural covers can be fun. Linn’s will provide details on how to obtain Inaugural Day postmarks when this information is made available by the USPS.