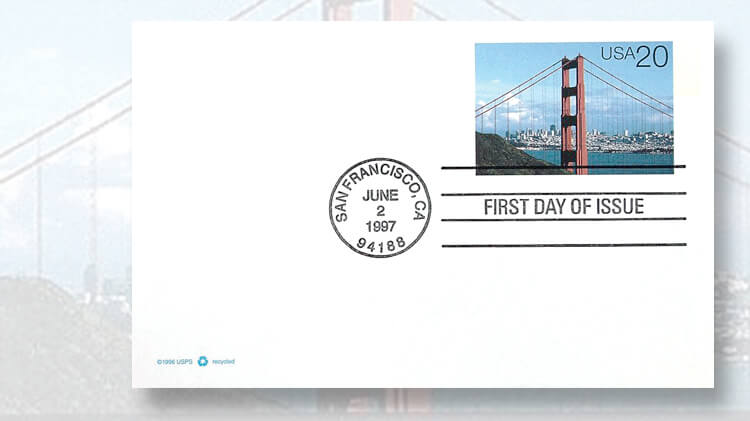 San Francisco’s Golden Gate Bridge appears by daylight on a United States postal card issued for the Pacific 97 international stamp exhibition in that city. The daytime climax of 1985’s A View to a Kill took place at the top of the bridge. 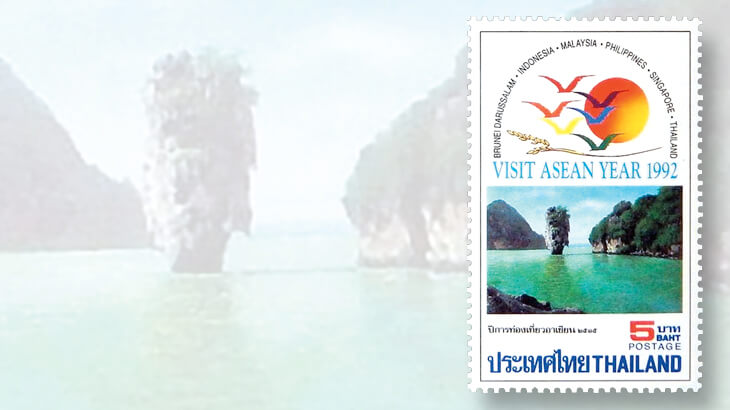 After the 1973 Bond film The Man with the Golden Gun was shot on Thailand’s Khao Phing Kan island, the site became a popular tourist attraction known as “James Bond Island.” The island’s islet of Khao Ta-Poo (Ko Tapu) appears on a 1992 Thai stamp. 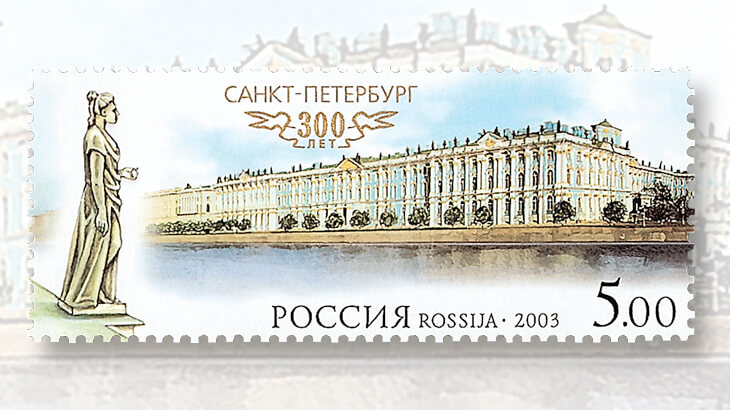 A view of St. Petersburg’s Winter Palace appears on a 2003 Russia stamp for the city’s tercentenary. The 1995 Bond film Goldeneye was shot there, the first of the franchise to be filmed in the former Soviet Union. 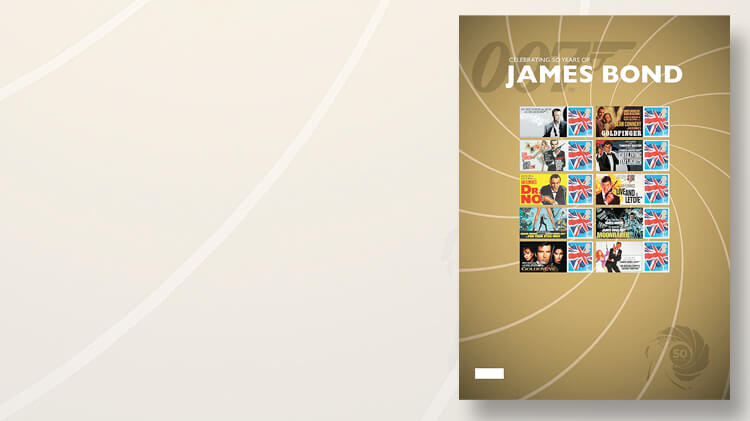 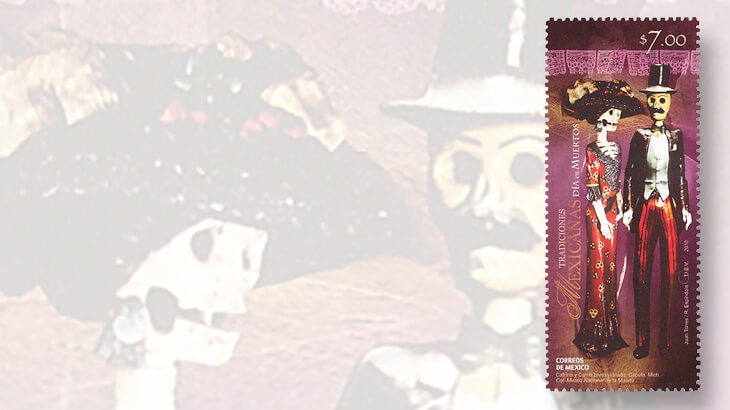 A stamp from Mexico in 2010 commemorating the Dia de los Muertos (Day of the Dead) holiday depicts a couple in skeleton costumes. Daniel Craig as James Bond wore a similar costume in the pre-title sequence filmed in Mexico City for the latest Bond film, Spectre, from 2015. 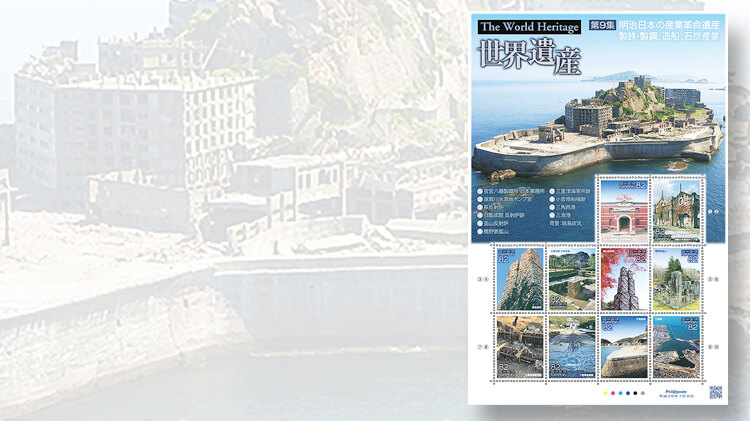 The abandoned industrial island of Hashima, off the coast of Japan, was used in the 2012 film Skyfall as villain Raoul Silva’s hideout off the coast of Macau. The island is featured on a Japanese World Heritage pane of 10 issued earlier this year. 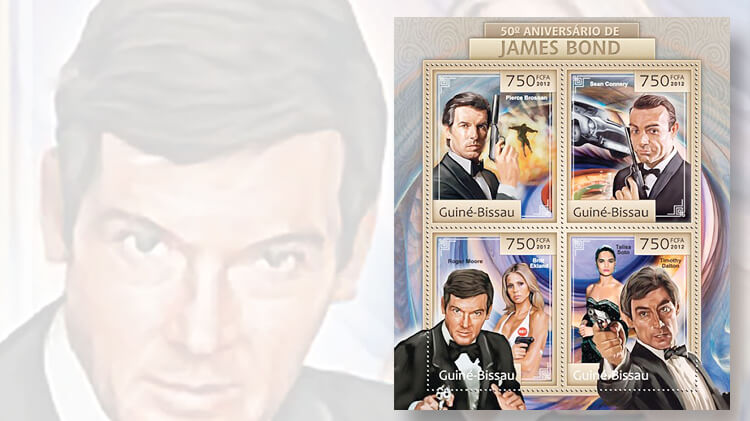 Guinea-Bissau marked the half-century of Bond movies in 2012 with a souvenir sheet depicting four of the six actors who had played the title role to that time. 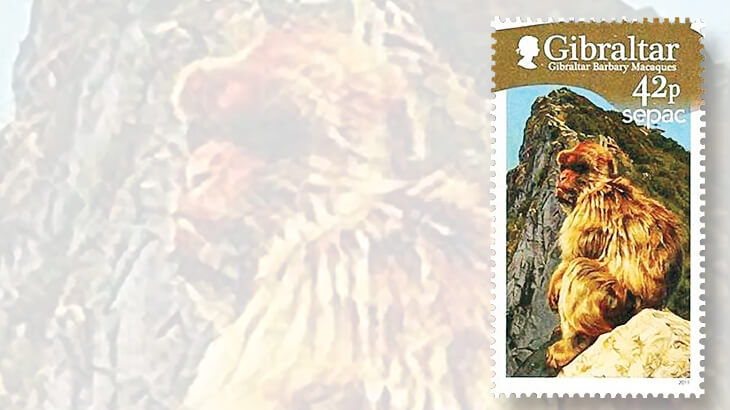 Barbary macaques of Gibraltar were featured in the pre-title sequence of the 1987 Bond film The Living Daylights as Timothy Dalton pursued an assassin on the Rock of Gibraltar. 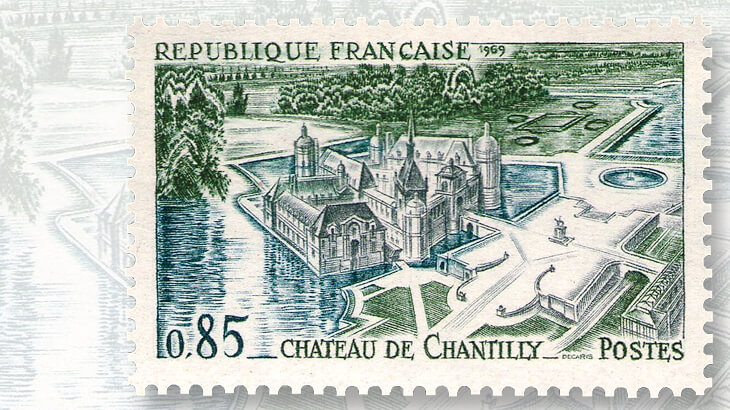 This French stamp from 1969 has a bird’s-eye view of Chateau de Chantilly; its exterior was represented as the California estate of villain Hugo Drax in the 1979 Bond film Moonraker.
Previous
Next

Few film series have captured the exotic sites of the world as have those starring the British secret agent character James Bond, code name 007, from the novels by Ian Fleming.

Each film in the series has depicted as many as three to six countries and their respective landmarks.

This article takes a philatelic journey through some of the sites and sights featured in the 24 official James Bond films produced since the debut of the franchise more than half a century ago.

Sean Connery starred as Bond in the first film, Dr. No, in 1962, and continued in the next four movies, until replaced by George Lazenby in 1969’s On Her Majesty’s Secret Service.

Connery came back for one more Bond film, Diamonds Are Forever, in 1971, and then Roger Moore debuted as the hero in 1973 with Live and Let Die.

Moore’s second outing as Bond, the following year in The Man with the Golden Gun, featured Khao Phing Kan, an actual island in Thailand. For the film’s purposes, Khao Phing Kan posed as an uncharted island in Chinese waters, the hideout of villain Francesco Scaramanga.

A 1992 stamp from Thailand (Scott 1481) shows a view from Khao Phing Kan. The tall islet of Khao Ta-Poo (Ko Tapu), also featured in the film, is visible at the center of the stamp.

After the film, this island became a tourist attraction and was popularly dubbed “James Bond Island.”

A 1969 French stamp (Scott 1234) depicts Chateau de Chantilly, in the town of the same name. The chateau was featured as the supposed California estate of villain Hugo Drax in 1979’s Moonraker.

The chateau and its Great Stables returned in 1985 for A View to a Kill, as the home of the mad industrialist Max Zorin, who planned to destroy Silicon Valley. This film was Roger Moore’s seventh and final appearance as James Bond.

A United States postal card, issued for the Pacific 97 international stamp exhibition in San Francisco (Scott UX282), pictures the Golden Gate Bridge, where an airship was tethered in the tense climax of View to a Kill.

A stamp-issuing entity familiar to stamp collectors, Gibraltar was featured prominently in the opening sequence of 1987’s The Living Daylights, in which the new Bond actor, Timothy Dalton, chases an assassin on the Rock of Gibraltar.

The Barbary macaques of Gibraltar, an endemic population of monkeys, were included in the film sequence and also are pictured on a set of stamps issued by Gibraltar in 2011 (Scott 1290-1295).

Poor box-office performance of Dalton’s second film, License to Kill, in 1989, combined with legal troubles, halted the production of a planned third Bond film with Dalton until he resigned from the role in 1994.

Goldeneye in 1995 was the first Bond film that was shot in the former Soviet Union. Bond visits St. Petersburg, where he chases kidnappers through the city’s streets in a tank.

A 5-ruble stamp, issued by Russia in 2003 for the city’s 300th anniversary (Scott 6772), pictures the Winter Palace, which appears in the film as an exterior shot.

Goldeneye marked Pierce Brosnan’s debut as Bond. Brosnan had been signed to star in 1987’s The Living Daylights, but his contractual obligation to star in television’s Remington Steele was renewed at the last minute.

Montenegro was the purported location of 2006’s Casino Royale, but the film was not actually shot there. This movie did continue the series’ pattern of international locales, filming in the Czech Republic, the Bahamas, Italy, and the United Kingdom.

External shots of Japan’s eerie Hashima Island were featured in the 2012 Bond film Skyfall as villain Raoul Silva’s hideout off the coast of Macau.

Hashima, an abandoned industrial town, was named a UNESCO World Heritage site in 2015, and is shown on one stamp in a World Heritage pane of 10 issued by Japan July 8, 2016.

Landmarks in Turkey, such as the Grand Bazaar of Istanbul and the Varda Viaduct, were featured in the opening sequence of Skyfall.

All the actors who had played Bond to date are represented on the labels.

Other countries, such as Guinea-Bissau, also issued stamps for the 50-year milestone of Bond movies, in 2012.

The latest Bond film, 2015’s Spectre, featured the Mexican holiday of Dia de los Muertos (the Day of the Dead, Nov. 2) as the setting of its pre-title sequence.

Daniel Craig is dressed in a skeleton tuxedo costume as he chases a fleeing bombing culprit through the festival-packed streets of Mexico City.

In recent years, Mexico has issued stamps annually for the holiday. The 2010 stamp shows a couple in skeletal fancy dress, with the man in a top hat and tails (Scott 2701).

Many more countries are still to be explored as new filming locations for the world-famous spy movies. Bond has yet to visit some major parts of the world, including Canada, Scandinavia, Australia/Oceania, and much of sub-Saharan Africa and the Middle East.

Even major American cities on the East Coast, including New York and Washington, D.C., have been featured only briefly, through exterior shots showing landmarks such as the United Nations headquarters and the Pentagon.

Due to political and safety considerations at the time, some locations depicted in the Bond films (for example, the Soviet Union, Cuba, East Germany, and Soviet-occupied Afghanistan) were filmed elsewhere.