Looking back at the ‘last known stagecoach robbery,’ 100 years later 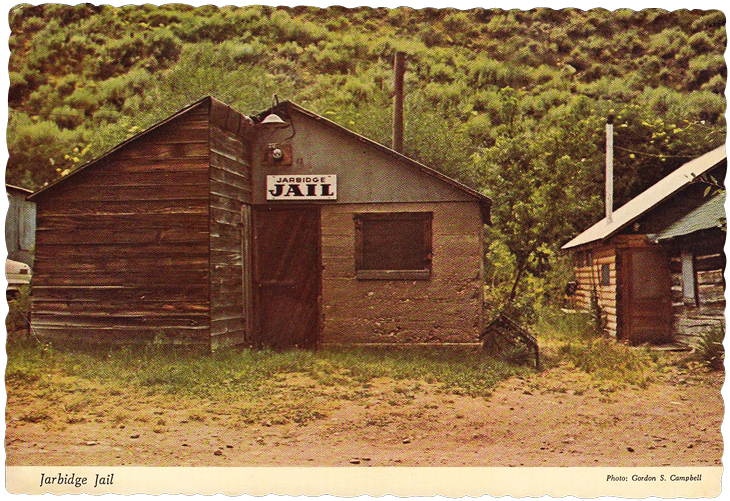 Mail robber and murderer Ben Kuhl and his accomplices were arrested and jailed in December 1916 in Jarbidge, Nev. The jail (which is still standing) is pictured on a 1960s postcard. 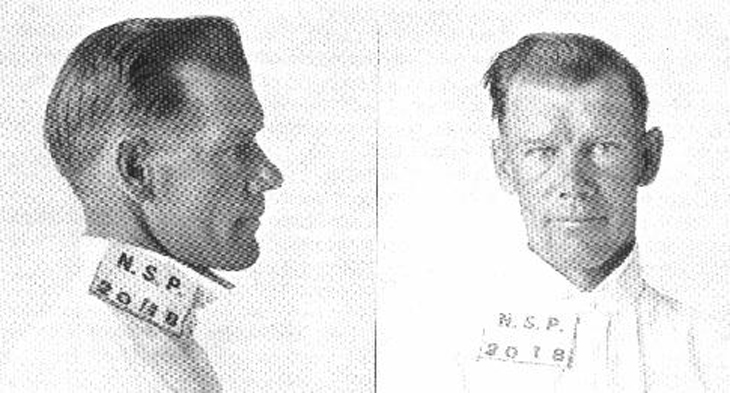 In a blinding snowstorm, in winter’s early darkness of Dec. 5, 1916, the United States mail wagon driver heading for the mining camp of Jarbidge, Nev., was murdered for the $4,000 in his mail pouches.

Jarbidge, at the bottom of a canyon more than 2,000 feet deep, lies in what is still in one of the remotest areas in the state. Now a ghost town, with no paved roads within 20 miles, Jarbidge was founded in 1910 after a gold strike there the year before.

Jarbidge is an Anglicized spelling (sometimes rendered as Ja-Ha-Bich) of the Native American word Tsawhawbitts, a name for either the devil or a man-eating giant.

A stampede of 1,500 prospectors arrived over the winter of 1909-10 and staked claims, sometimes atop 20 to 30 feet of snow.  The town (a tent city) was founded in March 1910, and in May the Jarbidge post office opened. By October, the mail was arriving three times a week from Three Creeks, Idaho, about 30 miles away.

By the Act of March 3, 1845, Congress abandoned its preference for using stagecoach lines as the preferred way to move mail in the United States and began to open mail contracts to the lowest bidders to promise “celerity, certainty and security.” Three asterisks stood for those nouns in the register of contracts and these became known as “star routes.”

Star route 70333 covered about 66 very rough miles from Rogerson, Idaho, (the closest railroad town), to Three Creeks, Idaho, to Jarbidge, Nev. The route driver, Fred M. Searcy, made round trips in an open wagon drawn by a pair of horses (not a stagecoach, which is a covered wagon, usually with passengers), conveying supplies, mail and payrolls for the businesses and workers of Jarbidge.

Searcy’s trip to Jarbidge on Dec. 5, 1916, included first- and second-class mail and a registered mail satchel containing about $4,000 (equivalent to almost $90,000 today), mostly cash for Newton Crumley, owner of the Success Bar. Eager for the mail, townsfolk gathered in late afternoon at the post office, though expecting that the day’s four feet of new snow might delay Searcy’s arrival.

The anxious postmaster, Scott Fleming, sent someone to look for Searcy, but the horseman returned several hours later without finding a trace of the wagon or the driver. Learning of the search, a resident on the road to town said she had seen the wagon pass sometime after 6 p.m., and the driver had not responded to her shouted greeting.

With this information, a search party went out, and around 11 p.m. found the mail wagon hidden in a patch of trees near the town, with the two horses still in harness and Searcy slumped on the seat, covered with snow. The rescuers thought Searcy had frozen to death, but found a bullet hole in the back of his head, with powder burns indicating the close range of the fatal shot.

The second-class mail sack was found slashed and rifled, but the sack with the money was missing. Further searches followed footprints to the river and a bloodstained shirt was found. One of the town’s stray dogs helpfully unearthed another of the mail satchels, with bloodstained letters scattered around, but no sign of the registered pouch.

Suspicion quickly fell on a relative newcomer to the area, Ben Kuhl, who had worked as a cook at the O.K. Mine but quit to become a gambler and ne’er-do-well. Free on bond while appealing a $400 fine for claim jumping and trespassing, he was sharing a cabin with Ed Beck and William McGraw. A bloodstained black overcoat, which many people in town identified as Kuhl’s, was found near the mail wagon, and a sack of $182 in coins and a .44 caliber revolver were found under Kuhl’s bed in the cabin.

Kuhl, Beck, McGraw and their friend B.E. Jennings were arrested. McGraw quickly told officials that the revolver was his, and the bartender at the Success kept it for him. McGraw said that Beck had asked to borrow the gun, and McGraw had retrieved the gun from the bartender and given it to Beck, who later told McGraw it had been used for the robbery.

Jennings was released for lack of evidence, but after the preliminary hearing the others were bound over to the county grand jury and taken to Elko, the county seat, by Jarbidge’s sheriff, Jess Harris, and the Elko County district attorney, Edward P. Carville.

Postal inspectors became involved in the case and took custody of the mail, including several bloodstained envelopes and, specifically, one envelope with what looked like a bloody human handprint.

The trial was set for April 16, 1917, but the worst winter in local history impeded officials trying to get to Jarbidge to interview witnesses and collect evidence, and for local witnesses to travel to Elko, and the trial was rescheduled for September.

The chief suspect brought a checkered past to his trial. Bernard Ellis Kuhl was born Aug. 12, 1884, on a farm in Porter County, Ind., to parents who had emigrated from Bavaria. The family moved to Washington State in 1889 and soon after began to fall apart. Ben’s father deserted and/or divorced his mother and soon remarried, as did his mother. Ben was living with her (without the stepfather) in Oregon at the time of the 1900 census, though she divorced that husband soon after and remarried and divorced again by 1913. In the 1910 census, Ben was living with his second ex-stepfather in Oregon, with their occupations listed as “farmer.”

Kuhl’s life of crime was already underway, with a four-month stretch in jail in 1903 in Marysville, Calif., for petty larceny, and an arrest for horse theft in Klamath Falls, Ore., in August 1910, though he was let off with “nine year good behavior parole.”  A newspaper report called Kuhl “a mere boy” who could throw himself on the court’s mercy, though he was 26 years old at the time.

He married a twice-divorced young mother of two children in Shasta County, Calif., in October 1914, but they do not seem to have produced children. She rid herself of Kuhl after his arrest and remarried.

William McGraw, who had been jailed since the murder to ensure his presence at the trial, testified about handing the gun to Beck, who then gave it to Kuhl. Beck, who had turned state’s evidence, testified that he and Kuhl had plotted to hold up Fred Searcy and steal the mail, but when Searcy resisted, Kuhl shot him and held him upright on the wagon seat until they found a place to hide the wagon in a patch of trees.

The revolver and bloodstained shirt and overcoat and sack of coins comprised the circumstantial evidence against Ben Kuhl, but the postal inspectors had turned over the envelope with the bloody handprint to two fingerprint experts from California, and their testimony clinched the matter for the jury. Charles Hassett Stone, head of the identification unit of the Bakersfield police department, joined by Oscar W. Bottorff of the Fresno police, had compared the handprint from the envelope with one taken from Kuhl in custody and found 18 points of comparison, proving that the two handprints were from the same person.

This was a milestone in jurisprudence: the first time that a handprint was used as a point of identifying evidence in a criminal trial.

This broke new ground at the time, though handprints and fingerprints today have been joined by iris and retinal scans as identifiers unique to each human, used for security and other purposes.

Kuhl’s lawyers argued that the evidence was merely circumstantial and the palm print was not admissible. Kuhl testified that he was in a saloon in Jarbidge at the time in question. The jury took only two hours to convict him of first-degree murder and Judge Taber sentenced him to be executed in January 1918.

Meanwhile, Ed Beck’s trial began on Oct. 8, 1917, and six days of testimony led to a verdict of guilty. He was given a life sentence and served a little more than six years in the Nevada state prison. McGraw’s case had been dismissed for insufficient evidence.

Kuhl’s attorneys appealed to the Nevada Supreme Court in November 1917, citing more than 60 alleged errors in the trial, but mainly claiming the bloody handprint from the envelope as inadmissible. The appeal was denied in July 1918, in a lengthy opinion that drew on the history of fingerprinting back to ancient China.

A new execution date was set for Dec. 20, 1918, with Kuhl given the choice of being hanged or shot; he chose the latter.  However, Kuhl and his lawyers met with state officials in early December and the felon told a new story: that Searcy had been part of the robbery plot, didn’t cooperate and so Kuhl shot him in self defense. For some reason, this threadbare tale impressed the state board of pardons, and on Dec. 14, 1918, they commuted Kuhl’s death sentence to life in prison.

The murderer settled down in the state prison in Carson City; the 1920 and 1930 censuses give his occupation as cook or baker. After seven years he became eligible for parole and began applying, but was refused every year. Eventually he was the longest serving inmate, until a very odd twist of fate.

Edward Carville, the Elko County district attorney who had prosecuted Kuhl’s case, had moved on to become a district judge and then the U.S. attorney for Nevada, before becoming governor and serving from 1939 until resigning in July 1945 to fill a vacancy in the U.S. Senate.

Kuhl was released on May 16, 1945, having served almost 28 years: more state prison time than anyone else in Nevada’s history. Kuhl had consistently denied knowing the location of the missing money, even when offered time off his sentence in exchange for the information.

Kuhl seems not to have ever returned to Jarbidge, moving from prison to San Francisco, where he had applied to work in a shipyard, according to an article in a Reno newspaper in May 1945. He registered in San Francisco for the draft in November that year, age 61. He died in the city on Nov. 4, 1958, aged 74 years and eight months, possibly from pneumonia or tuberculosis.

And what of the victim in this sorry tale?  One source (unverified) says that Fred M. Searcy (sometimes misspelled “Searcey”) had been driving the mail for only a month before his fatal trip to Jarbidge. His pitiful death certificate, not filed until Feb. 28, 1917, seems to support a role of newcomer to the area. The certificate states that Fred M. “Searcey” was a white, single male, occupation stage driver, who died about 6:30 p.m. on Dec. 5, 1916, of a “gunshot wound through the head inflicted with murderous intent.”

Questions about his age, residence, birthplace and parents’ names are answered with question marks, and in the space on the form where the signer (John E. Worden) affirms the truth of the information is typed, “No one knew anything about him.”

The form says the body was taken to Twin Falls, Idaho, where presumably the postal officials in that county seat had details about their employee and could send his body for burial.

Recent genealogical research has revealed that Fred Moore Searcy was born in September 1883 in Jackson County, Mo., to Francis Marion and Susan Ann Barton Searcy.  In December 1908 he married Nellie Burstow in Hardman, Ore., and in the 1910 census they were listed as farming there, but Fred divorced her in 1915 on the grounds of her desertion a year earlier.

He was just 33 years old when Ben Kuhl murdered him, and is buried in Salem Cemetery in Independence, Mo.

Special thanks to Mary G. Reed, professional genealogist, for researching various persons and events in this story.