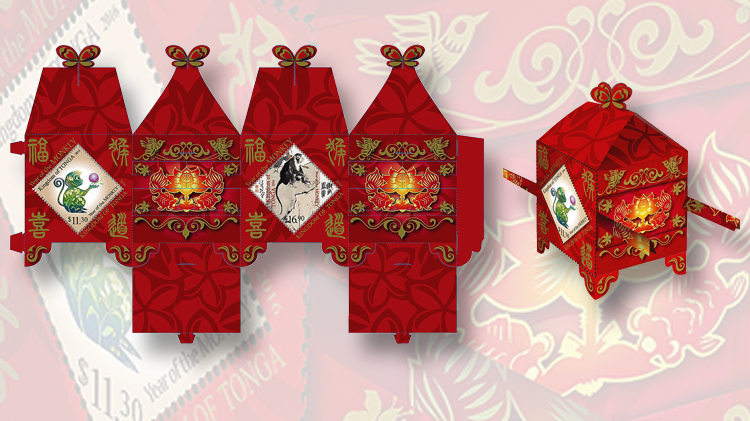 Tonga made its first appearance in the top three of the popularity poll with its Year of the Monkey pane. The pane is shown unfolded. As pictured at right, it can be folded in the shape of a sedan chair. 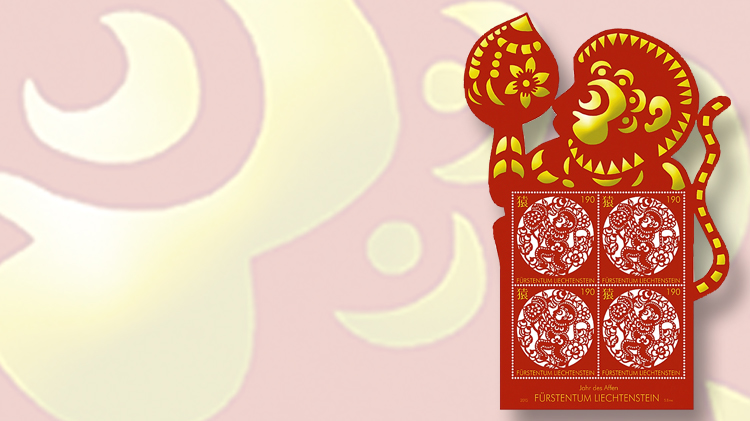 Liechtenstein’s Year of the Monkey pane of four stamps shaped like a monkey was voted as most popular issue in a recent stamp poll. 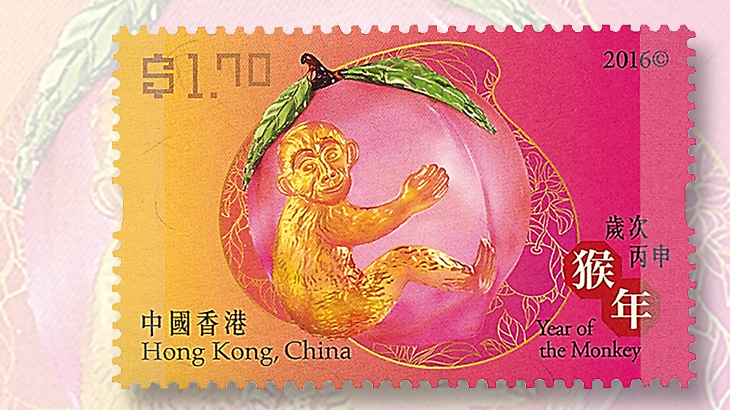 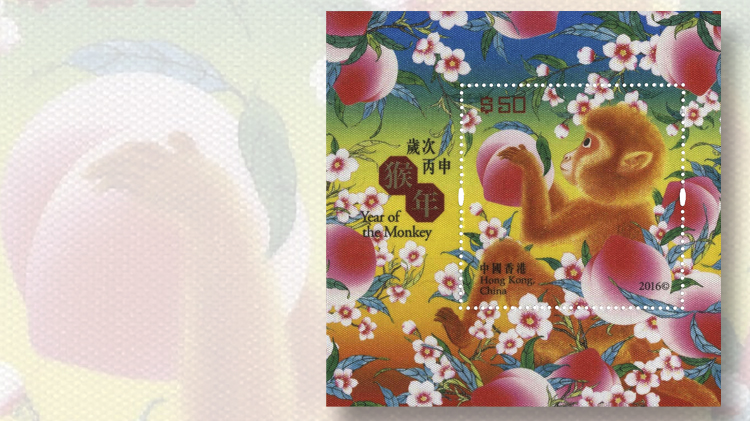 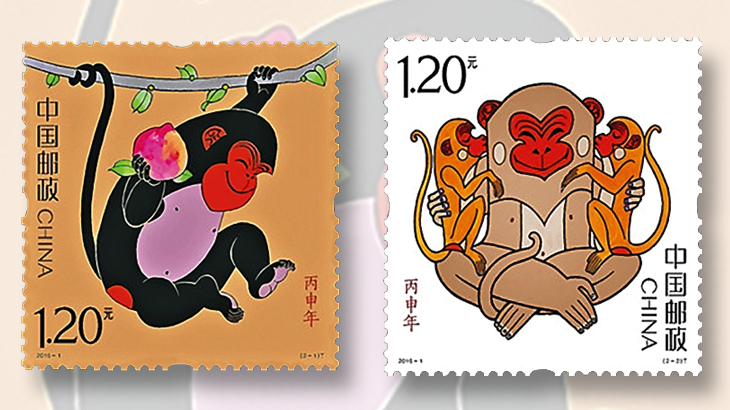 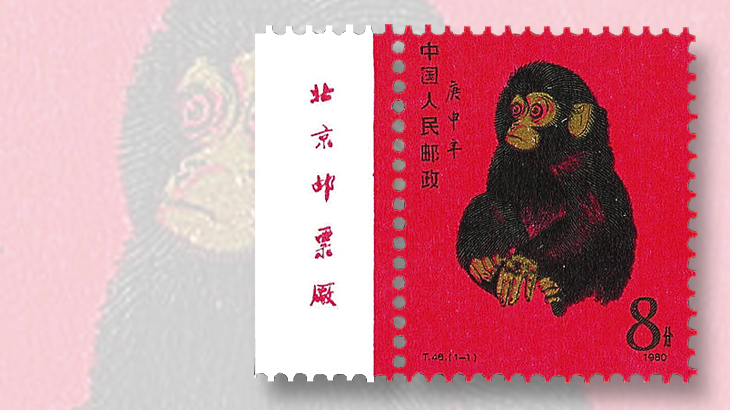 Stamps from Liechtenstein, Hong Kong, and Tonga won a competition for the best Year of the Monkey stamps.

The contest included stamps from 55 countries or special administrative regions celebrating the Year of the Monkey. The stamps were issued in late 2015 or early 2016.

The contest was organized by the Chinese Shengxiao (Zodiac) Philatelic Society and was also sponsored by the weekly newspaper Philately, the Suzhou Shengxiao (Zodiac) Stamp Museum, and eight philatelic units. This is the seventh competition for the best Chinese Zodiac stamps.

The Chinese New Year, also known as the Lunar New Year, follows a 12-year cycle, with each year associated with one of the zodiac signs. The monkey is the ninth animal in the cycle of the Chinese zodiac calendar.

As with the competitions held in 2014 and 2015, voting in the Year of the Monkey competition was only open to the members of Chinese Shengxiao Philatelic Society, not to other stamp collectors.

China’s fastest growing philatelic society, it has more than 6,700 members, gaining 700 members in the last year.

The members and experts were asked to select not more than three best Year of the Monkey stamps. A total of 3,028 votes from society members in Mainland China, Taiwan, Hong Kong, Macao, the United States, and Australia were received.

China’s Year of the Monkey stamps were not eligible because the contest focused on stamps from other countries and special administrative regions. The panel gave the set of two 1.20-yuan stamps issued Jan. 5, 2016, an honorary award.

The set includes two stamps. One depicts a monkey holding on to a vine with one hand and a peach in its other as a symbol of good luck. The second stamp shows an adult monkey with infants sitting to its left and right, symbolizing happiness, longevity, and family.

The designer is 92-year-old Huang Yongyu. It has been reported that he was asked to have one stamp feature a mother and infant. His design, however, features two baby monkeys kissing the mother.

Huang said he was merely keeping up with China’s new family planning policy, which on Jan. 1, 2016, began permitting most couples to have two children rather than one, because the country formally ended its one-child policy.

Huang also designed the 1980 Year of the Monkey stamp. Nicknamed the “Red Monkey,” that stamp has grown in value 200,000 times more than its original price of 8 fen in the past 36 years. It has come to symbolize the strong market for collectible postage stamps in China.

Demand has made it one of the most sought-after contemporary Chinese stamps. Although the stamp was initially common, a full sheet of 80 sold for the equivalent of $192,521 at an InterAsia sale in September 2011.

Liechtenstein issued its fifth Chinese zodiac stamp Nov. 16, 2015, to celebrate the Year of the Monkey. This 1.90-franc stamp was designed as a delicate paper cut and produced using ultramodern laser technology.

The designer, Stefan Erne, chose the color red, the symbol for luck in China.

The stamps were sold in monkey-shaped panes of four.

Liechtenstein finally won first place in 2016 for the Year of the Monkey contest. Its stamp received 1,820 votes, or 60 percent of the total vote.

One of the three souvenir sheets from Hong Kong contains a single $10 stamp. Another is a silk souvenir sheet with a $50 stamp, the fifth such sheet in Hong Kong’s Lunar New Year series. According to the certificate of authenticity, this sheet was produced using 100 percent genuine silk made in Italy.

The third Hong Kong souvenir sheet contains two $50 stamps: a Year of the Ram stamp printed using silver foil, and a 22-karat gold-foil Year of the Monkey stamp. This sheet also is accompanied by a certificate of authenticity.

Hong Kong Post began issuing stamps featuring the animals of the Chinese zodiac in 1967. The 2016 Year of the Monkey issue is the fifth set in the fourth series (each series continues for 12 years) of Lunar New Year stamps.

The press release about the contest said that Hong Kong’s souvenir sheets were elegant and beautiful, bringing festive joy.

With 1,230 votes, or 41 percent, Tonga became the dark horse of the competition, coming in third place This is the first time a Tongan stamp has been one of the winners in the poll.

The South Pacific kingdom issued two stamps Sept. 25, 2015, to celebrate the Year of the Monkey.

The two diamond-shaped stamps are in a pane that can be folded into the shape of a Chinese wedding sedan chair. The sedan chair was a special transportation vehicle in ancient China, specially used to bring the bride to the groom’s home on the wedding day.

The $11.30 stamp, designed by Sophia Zhang, shows a symbolic monkey in shades of green and decorated with a floral motif.

The $16.90 stamp features a Chinese calligraphy painting by Zeng Fan. Born in 1938, he paints in the traditional style, often using a monkey as his model.

This bold and distinctive do-it-yourself project is shown here unfolded and folded into the shape of a sedan chair.

In previous years, Canada placed among the top three four times: for the Year of the Tiger, Rabbit, Snake, and Ram. In this 2016 competition, Canada placed fourth, receiving 1,160 votes, only 70 votes fewer than Tonga.

The competition committee printed a postcard picturing the three top Year of the Monkey issues. Everyone who voted in the contest received this postcard Dec. 1 signed by the president of the Chinese Shengxiao Philatelic Society, Zhou Zhi-hua.

Dingguo Dai is a philatelic columnist and retired chemist living in Arizona. He writes columns for the Chinese monthly Philately, Shanghai Philately, China Philately News, and Shengxiao (Chinese Lunar Zodiac) Philately. He also was a jury member for the contests for the Year of the Tiger, Rabbit, Dragon, Snake, Horse, Ram, and Monkey stamps.