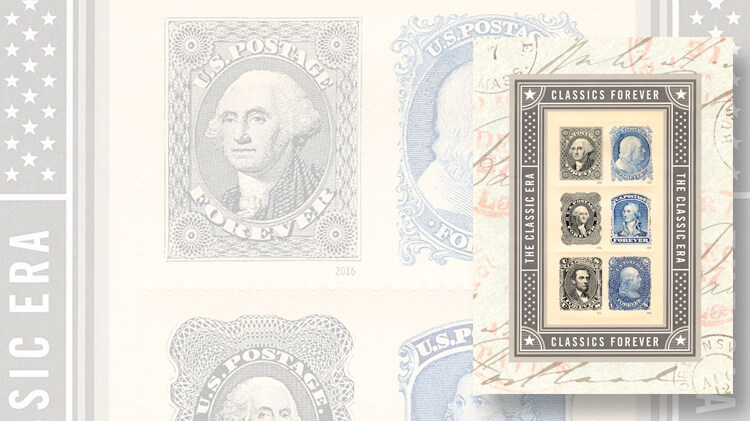 Among the stamps issued during World Stamp Show-NY 2016 was this pane of six Classics Forever stamps that reproduces the designs of 19th-century engraved issues.

In 2016, the United States Postal Service issued 154 varieties of stamps and postal stationery, including one stamped envelope, 52 commemoratives, 75 definitives and 11 special stamps for occasions such as holidays and weddings.

Also part of the total were 15 imperforates — stamps without die cuts — from uncut press sheets of conventionally issued stamps that were offered to collectors on a limited basis at face value. The USPS has purposely created such varieties since 2012, and the Scott catalog editors began assigning them minor-letter listings last year.

However, the Postal Service cut back on this practice in 2016. The 15 imperforates were significantly fewer than the 62 of 2015, and all 15 came in January and early February, suggesting that they may have been the last of their kind, at least for a while.

As usual, the great majority of the year’s output was nondenominated forever stamps. The availability of such postage took on extra significance when on April 10 a temporary rate hike expired, and for only the third time in U.S. history, the cost of mailing a first-class letter fell, from 49¢ to 47¢. No new stamps were issued on this occasion; instead, post offices continued to sell their current stocks of forever stamps at lower prices.

As in recent years, the commemorative stamp output for 2016 included several multiple-variety sets.

One of the most noteworthy was a pane bearing replicas of six classic engraved U.S. stamp designs from the 19th century. Called Classics Forever and printed by intaglio, a process popular with collectors but seldom used by the USPS nowadays, it was one of five sets and a single that were issued on successive days at World Stamp Show-NY 2016, an international philatelic exhibition at New York City’s Javits Center.

In an additional gesture to collectors, the USPS ordered the stamps made with a special self-adhesive composition to allow canceled examples to be soaked off their envelopes in water, which can’t be done with most current U.S. self-sticks. Linn’s Stamp News later tested this claim and reported that such soaking was possible, but required extra time, extra care, and heated water (Oct. 24 Linn’s).

The Classics Forever set had a downside for collectors, however. The stamps couldn’t be purchased at local post offices, but were available only at the World Stamp Show and online or by toll-free telephone.

Pop-culture icons are saluted on two additional quartets. The block for the TV and movie series Star Trek shows three views of the starship Enterprise and a crewman on a transporter platform. The set for Wonder Woman’s 75th anniversary depicts the heroine as she appeared during four periods of comic-book history: golden age (1930s to 1950s), silver age (1950s to 1970), bronze age (1970 to mid-1980s), and modern age (mid-1980s to present).

Two stamps issued at WSS-NY 2016 on its opening day commemorate the show itself. Bearing identical designs, one in red, the other in blue, that blend geometric elements and typography, they were produced in a 24-stamp folded pane and, like the aforementioned six Classics Forever stamps, were printed by intaglio. Also like the Classics Forever set, they were sold only at the show itself and by online and phone order.

Several commemorative singles were entries in long-running series. Richard Allen, founder and first bishop of the African Methodist Episcopal Church, is honored on the 39th stamp in the Black Heritage set, which was launched in 1978 when the first-class postage rate was 13¢ and is by far the oldest continuous U.S. commemorative series. The 31st Literary Arts stamp depicts author Henry James and, like other recent stamps in that set, it bears the inscription “Three Ounce” to serve as a forever stamp fulfilling the 3-ounce rate for first-class mail.

The USPS welcomed the Year of the Monkey with a stamp displaying peonies, the national flower of China, plus a small monkey image. It is the sixth stamp in a second series of annual Lunar New Year commemoratives designed by Kam Mak; the 12 stamps in the first sequence were designed by Clarence Lee and were issued annually from 1992 to 2004.

The 20th Legends of Hollywood stamp depicts Shirley Temple, who starred in hugely popular films as a child actress in the 1930s and 1940s and as an adult served the nation as U.S. delegate to the United Nations and ambassador to Ghana and Czechoslovakia. The Music Icons series, with its seventh stamp, honors jazz and pop singer Sarah Vaughan.

Free-standing commemoratives mark the 200th anniversary of Indiana statehood and the 250th anniversary of the 1766 action by the British Parliament repealing the Stamp Act, a taxation law that outraged the American colonies and set them on the path to revolution.

Another single honors Bolivia-born Jaime Escalante, who won renown among American educators with his unorthodox but successful approach to teaching at-risk high school students in California, and whose story was told in the film Stand and Deliver.

January 2016 turned out to be an expensive month for philatelists, thanks to a trio of Postal Service items for expedited service. The costliest was a $22.95 American Landscapes definitive for Priority Mail Express that pictures the Columbia River Gorge and is the first stamp produced by the USPS with a denomination higher than $20. The other two were a $6.45 Priority Mail definitive and $6.45 Priority Mail stamped envelope — the year’s only new postal stationery variety — both picturing La Cueva del Indio (“the cave of the Indian”), an archaeological site on Puerto Rico’s north coast.

The priciest of the other definitives of 2016 is the fifth in a sequence of round global forever stamps that began in 2013. This one displays a photograph of the full moon, with features of the lunar surface easily visible. Nondenominated, it initially sold for $1.20 and will always be valid for the 1-ounce international letter rate.

Four definitives, called Songbirds in Snow, were issued at the American Philatelic Society’s 130th annual convention and picture golden-crowned kinglets, red-breasted nuthatches, a cedar waxwing, and a northern cardinal, each perched on a snow-covered tree branch. The artwork is by Robert Giusti, whose bird paintings have appeared on numerous other U.S. stamps in recent years.

Fruit is the subject of three low-value denominated coil stamps. A 5¢ stamp depicting clusters of pinot noir grapes and a 10¢ stamp picturing two red pears were issued early in the year and were followed in August by a 1¢ stamp showing a pair of apples on a branch. All three images were created in pen-and-ink and watercolor by John Burgoyne. According to a published interview with USPS stamp development director William Gicker, other Burgoyne fruit illustrations will appear on future low-denomination U.S. stamps.

The sixth entry in the Postal Service’s Butterflies definitive series illustrated by Tom Engeman shows an Eastern Tailed-Blue Butterfly. These large square stamps meet the first-class rate for certain irregularly sized envelopes, including square ones for greeting cards, and in place of a denomination bear the words “Non Machineable Surcharge.”

The year saw yet another forever stamp design featuring the U.S. flag, this one waving against a backdrop of clouds and a blue sky. It was issued in 10- and 20-stamp panes and 100-stamp coils made by two different printers, resulting in four collectible varieties. A related design evoking Old Glory was presented on a Patriotic Spiral stamp issued in booklet and coil form and showing 50 blue and red stars spiraling around a central star of gold.

Three nondenominated coil stamps were issued for use by businesses that presort their outgoing mail. They are a pair of (25¢) stamps for first-class mail showing two different star-shaped quilt patterns, and a single (5¢) with a single large red star and the blue letters “USA” for nonprofit organizations.

The tradition of special stamps to decorate holiday mail was expanded to include two holidays that had previously gone without specific U.S. postal commemoration: the Hindu festival of Diwali, which spans five days each autumn and celebrates the triumph of good over evil, and the secular American celebration of Halloween.

The Diwali stamp, which had been sought by an Indian-American organization and had backing in Congress, features a photograph of a traditional diya oil lamp against a sparkling gold background. The Halloween block of four was printed in orange and black and shows photos of a quartet of grinning jack-o’-lanterns.

One of the year’s two religious-themed Christmas stamps incorporates an original Nativity scene by Nancy Stahl, while the other reproduces a detail from a 15th-century Florentine tempera-on-poplar painting, artist unknown, showing Mary and the infant Jesus.

The 2016 Contemporary Christmas issue comprises a block of four stamps with artwork by William Low depicting familiar interior and exterior holiday decorations: a candle on a windowsill, a snow-covered wreath, a bright gold star ornament, and a richly decorated Christmas tree viewed through a window from outside.

Low also created a similarly themed illustration for the 12th U.S. stamp celebrating the Jewish holiday of Hanukkah, this one showing a menorah in the window of a home, with snowy branches visible outside.

The stamp for Kwanzaa, also the 12th in its series, marked the 50th anniversary of a nonreligious festival of community and culture celebrated by an estimated 18 million African Americans. It pictures a woman holding a large purple bowl filled with fruits and vegetables, symbolizing the abundance of African first harvests. The ninth stamp for the Muslim holiday of Eid bears a gold-colored script message in Arabic on a purple background and was designed, like its predecessors, by Virginia-based calligrapher Mohamed Zakariya.

The 2016 Love stamp — which happened to be the first U.S. issue of 2016 — features a colorful quilled paper heart created by Russian-born paper artist and illustrator Yulia Brodskaya. Quilling uses narrow paper strips that are rolled, curled, shaped into a form, then laid on their edges and glued into place.