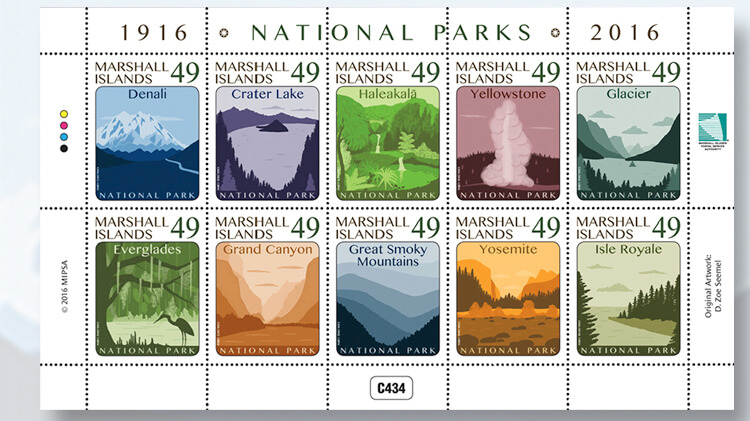 The Marshall Islands began a series of stamps featuring national parks in the United States with this pane of 10 issued Dec. 15, 2016. Two additional panes will be released in 2017. The National Parks Service celebrated its centennial in 2016.

The Marshall Islands will continue its series of stamps featuring national parks of the United States in 2017.

The series began Dec. 15, 2016, with 10 se-tenant 49¢ stamps representing national parks from Florida to California and Alaska to Hawaii.

The first row of stamps shows Denali in Alaska; Crater Lake in Oregon; Haleakala on Maui in Hawaii; Yellowstone in Wyoming, Montana and Idaho; and Glacier in Montana. The Yellowstone stamp depicts the famous Old Faithful geyser.

The second row includes the most visited and one of the least visited national parks: the Great Smokey Mountains in Tennessee and North Carolina received more than 10.7 million visitors in 2015; and Michigan’s Isle Royale, located in Lake Superior, received 18,604, making it the least-visited in the lower 48. Visitors to Isle Royale arrive by boat or seaplane.

The other three stamps in the bottom row feature the Everglades in Florida, Grand Canyon in Arizona, and Yosemite in California.

Two other National Parks panes are included on the Marshall Islands’ stamp program for 2017.

The second pane in the series is scheduled for release on May 10. The 10 49¢ stamps will picture scenes of Arches National Park in Utah, Glacier Bay in Alaska, Sequoia in California, Rocky Mountain in Colorado, Petrified Forest in Arizona, Olympic in Washington, Guadalupe in Texas, Badlands in South Dakota, Mammoth Cave in Kentucky, and Acadia in Maine.

The scheduled issue date for the third pane of 10 is Nov. 28. The parks selected for this pane are Bryce Canyon in Utah, Redwood in California, Katmai in Alaska, Black Canyon of Gunnison in Colorado, North Cascades in Washington, Big Bend in Texas, Carlsbad Caverns in New Mexico, Biscayne in Florida, Great Basin in Nevada, and Hot Springs in Arkansas.

An Aug. 4 issue honoring the artwork of artist and stamp designer Paul Calle (1928-2010) might also include a Grand Canyon design. The program reports that the subjects for this set of 20 are tentative. Another proposed subject is President John Kennedy’s dream of man on the moon.

Kennedy was born May 29, 1917, in Brookline, Mass., and the Marshall Islands will commemorate his 100th birth anniversary with a souvenir sheet containing a single $1 stamp. The sheet will feature the eternal flame from Kennedy’s grave in Arlington Cemetery.

Less than two weeks later, on June 8, the Marshall Islands will mark the 150th birthday of architect Frank Lloyd Wright with a souvenir sheet showing Fallingwater. This house over a waterfall in southwestern Pennsylvania was designed by Wright in 1935 and constructed in 1936-38.

The Marshall Islands’ first issue of 2017, on Jan. 2, features photography by John Clark Helzer. Additional stamps in this Photography series will be issued April 4 and Sept. 1.

On Jan. 28, the Marshall Islands will issue a pane of four $1.20 stamps to celebrate the Year of the Rooster.

The program will continue Feb. 22 with 20 stamps featuring the art of haiku poetry.

The first of three issues with nature themes is slated for release on March 3. This Flora set will include 10 se-tenant designs.

Another three issues in 2017 will show seaplanes and ships. The March 21 China Clipper set of six depicts seaplanes; an Aug. 21 set of 10 shows steamships; and a souvenir sheet on Sept. 20 commemorates the 50th anniversary of the launch of the cruise ship Queen Elizabeth II.

Jazz and blues instruments will be pictured on a pane of 10 to be issued April 25.

Scenes with children and families from around the world are shown on the World Youth pane of 20 scheduled to be issued June 29.

Ten of the 29 atolls that make up the Marshall Islands are featured in a July 13 issue: Majuro, Kwajalein, Arno, Ailinglaplap, Jaluit, Mili, Ebon, Namu, Wotje, and Maloelap.

The Marshall Islands will issue two sets of Christmas stamps on Nov. 2. A set of six domestic-rate stamps illustrates the biblical account of the birth of Jesus, and a set of four international-rate stamps will show scenes of cutting and bringing home a Christmas tree.

The Marshall Islands Postal Service reports that there might be changes in the program as announced.