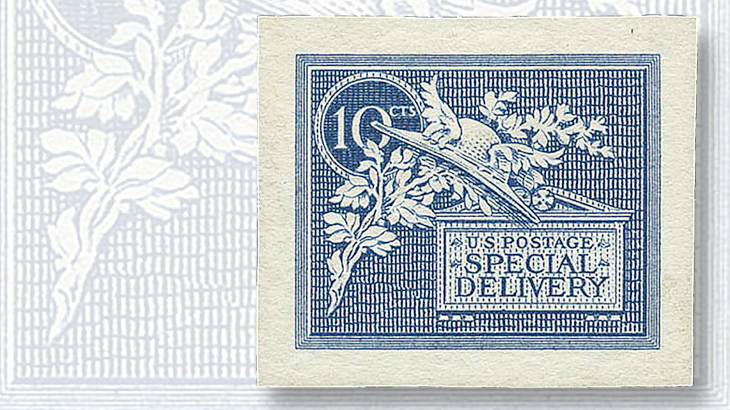 An engraved essay for the 1908 so-called Merry Widow special delivery stamp was sold by Matthew Bennett in October for $776.25. 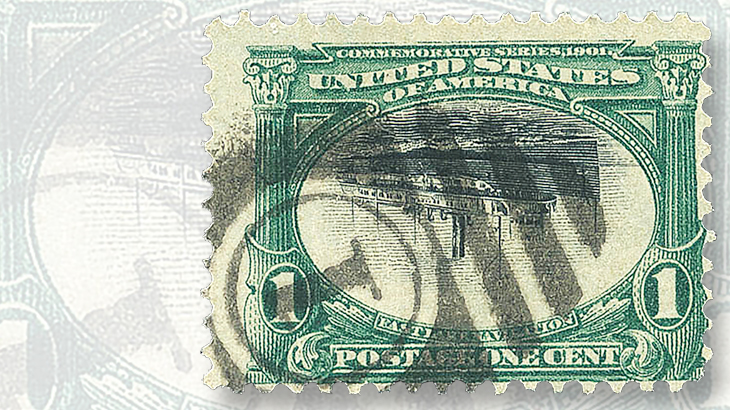 Off-center, heavily canceled and with a slight crease, but still desirable, a 1901 1¢ Pan-American invert fetched $6,325 at the Matthew Bennett auction in October. 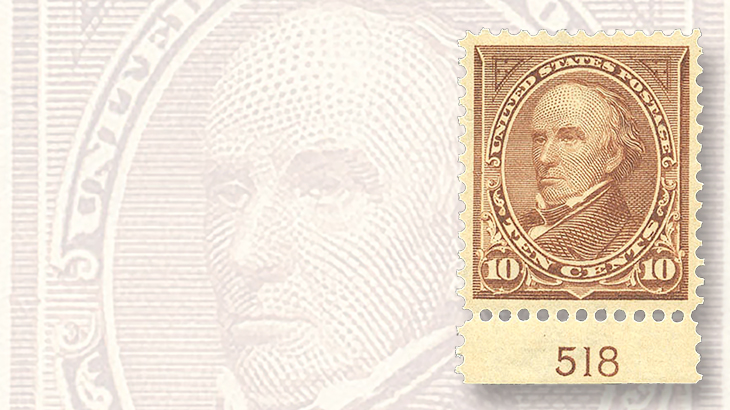 An example of the 1898 10¢ brown Daniel Webster, with bottom ornaments identifying it as type I, graded superb 98, realized $21,850 at the Matthew Bennett sale in October. 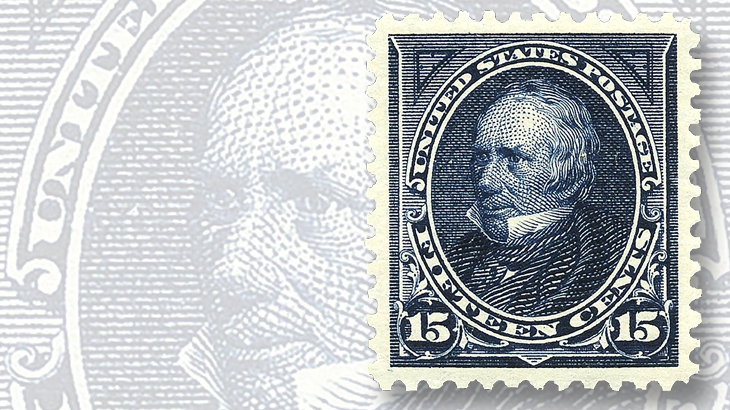 An example of the 15¢ Henry Clay stamp from the First Bureau Issue of 1894, graded superb 98, realized $27,600 at the Matthew Bennett auction in New York in October. 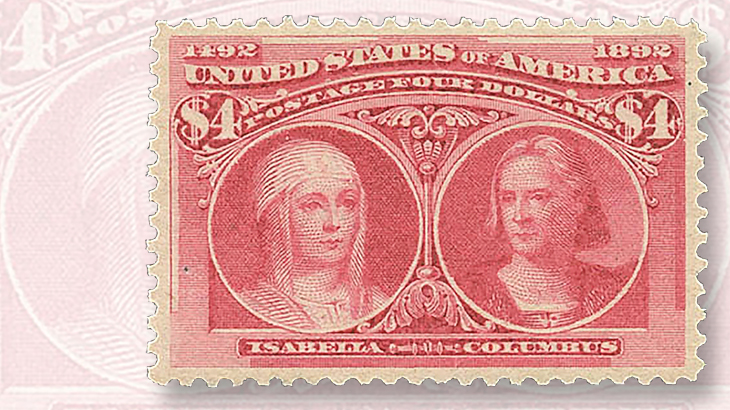 A $4 Columbian commemorative of 1893 graded extremely fine-superb 95, possibly the “finest mint single extant,” sold for $29,900 in October at the Matthew Bennett auction in New York. 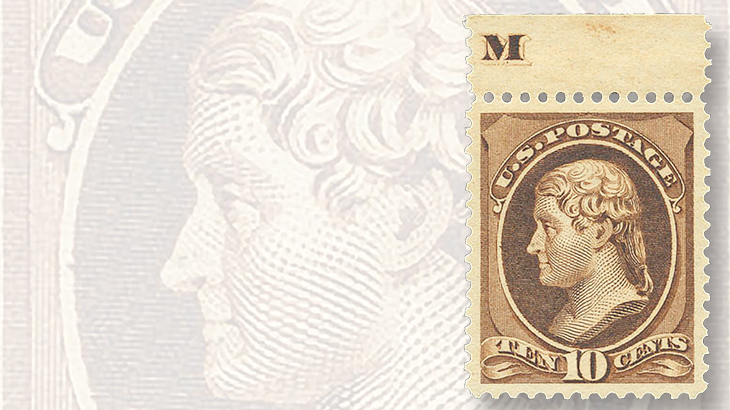 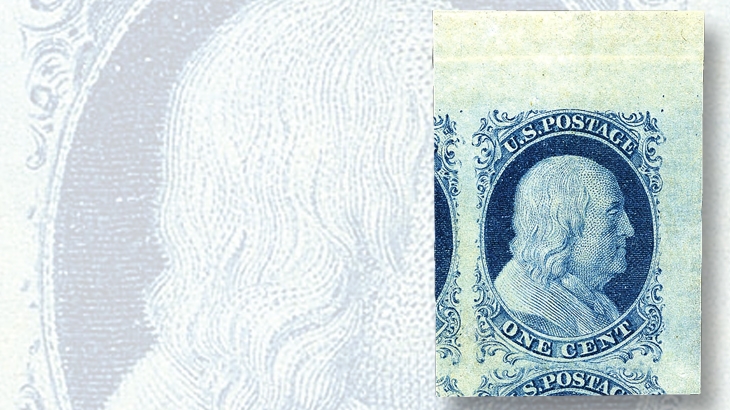 Matthew Bennett offered a stunning, corner-margin example of the 1851 1¢ Franklin stamp, type II, at auction in New York in October. It is the only example graded 100 jumbo, and it sold for $13,225.
Previous
Next

On Oct. 20-21, Matthew Bennett offered U.S. and Canadian stamps in a New York City auction. Many were superlative examples, and rare as such. A stunning, corner-margin example of the 1851 1¢ Franklin, classified by collectors as type II (Scott 7) due to the degree of scrollwork cut away from the periphery of the design, was described as “matchless” and “impossible to improve upon.” Indeed, it was awarded a grade of 100 jumbo by Professional Stamp Experts (PSE) in 2008, the only example to attain that top grade.

Showing a large sheet margin and parts of three adjoining stamps, the stamp had been part of a multiple until the 1990s, when it was cut down to its present status as an outsize single. Unused, with original gum and only the lightest of hinge marks, the stamp sold for $13,225, including the 15 percent buyer’s premium added by the Bennett firm to all lots.

While some might consider such liberation of an outsized single from even a damaged block a form of philatelic “cheating,” no such hocus-pocus happened with the 1882 re-engraved 10¢ Jefferson Bank Note issue (Scott 209) in the Bennett sale.

With perfect centering, rich color and pristine, never-hinged gum, augmented by a top-margin tab showing the initial “M,” the stamp graded superb 98 sold for $19,550. It is the only example graded so high to date, and therefore rightfully described as the best one known.

The same grade and condition were assigned to a magnificent example of the 15¢ Henry Clay from the First Bureau issue of 1894 (Scott 259).

“Most seasoned collectors have come to realize that to obtain a beautifully centered example, they would probably have to settle for one that was hinged,” wrote Bennett in the sale description. “We know one fortunate collector will no longer have to settle.”

For that privilege, somebody agreed to part with $27,600.

A lovely example of the $4 Columbian commemorative of 1893 in a “luxuriant” crimson-lake shade (Scott 244) was graded extremely fine-superb 95. Dubbed “a contender for the finest mint single extant,” the never-hinged gem went to a new owner for $29,900.

And the beat went on. Regarding the 1898 10¢ brown Daniel Webster, with bottom ornaments identifying it as type I (Scott 282C), the firm wrote, “a review of a number of years of auction catalogues reveals a dismaying absence of superlative examples” of this stamp.

The example offered by Bennett, with a grade of superb-98, never-hinged gum and a bottom-margin tab showing the plate number 518, sold for $21,850.

It was not all pretty stamps, however. A used example of the 1901 1¢ Pan-American invert (Scott 294a), off-center and with a heavy numeral cancel, was offered with the reminder that postally used examples of this popular error are far scarcer than mint ones. Though beset by a slight corner crease — most used examples are faulty — it fetched $6,325.

Among the more unusual items in the sale was an engraved essay for the 1908 special delivery stamp commonly referred to as the Merry Widow, because of the winged hat of Mercury in the design that resembles hats worn in a contemporaneous popular musical of that title.

Produced in deep blue-green by the Bureau of Engraving and Printing, the essay is similar to the bright green issued stamp (Scott E7) but differs in details of the lettering and background, as well as the rendering of the leaves and wings.

Such essays, like the demo recordings of famous musicians, reveal the creative process and attention to detail that went into crafting works we know and love. Studying the essay allows us to debate whether aspects of the final design are better or worse than the tentative elements in the essay, and gives us a renewed appreciation for the familiar stamp. Listed in the Scott Specialized Catalogue of United States Stamps and Covers as E7-E5b, the essay sold for $776.25.