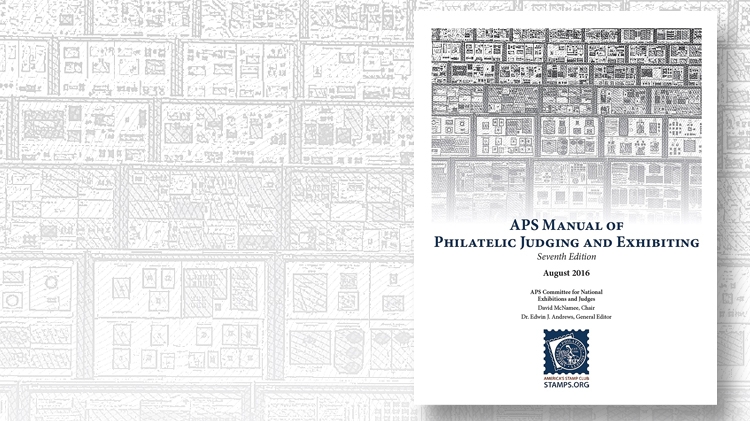 The front page of the revised APS Manual of Philatelic Judging and Exhibiting, Seventh Edition, published by the American Philatelic Society. 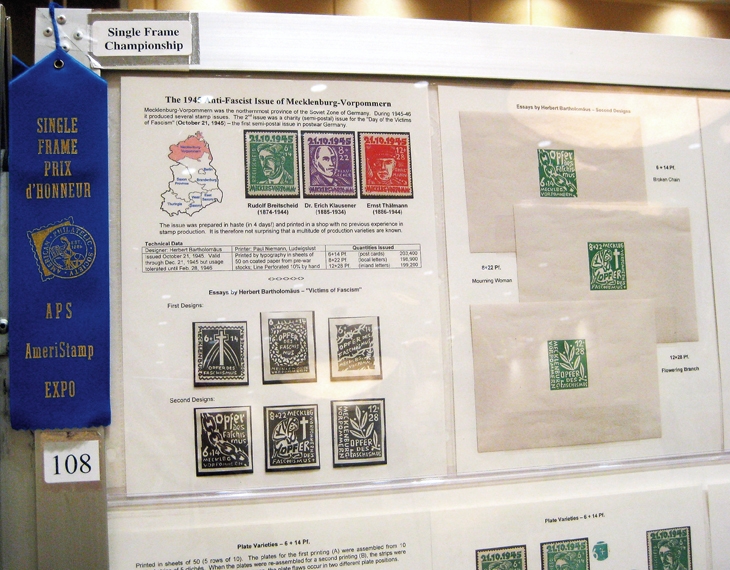 The introductory pages of an award-winning single-frame exhibit from the 2015 American Philatelic Society Ameristamp Expo in Riverside, Calif. Stamp show judges will begin reporting points for competitive exhibits and using an eight-medal system in 2017.
Previous
Next

On Oct. 29, Linn’s Stamp News reported the availability of the new American Philatelic Society judging manual in its latest version, the seventh edition.

So, what’s in it for the exhibitor and how will it affect exhibiting?

Exhibitors need to know what judges are looking for when evaluating their displays. Therefore, it pays for collectors to read through the new manual before revising current exhibits or planning new ones.

One major difference from the new manual’s predecessors is that the emphasis in the new edition is on guidelines and not rules for exhibiting.

APS plans future shows, possible international in 2021: In its Dec. 6 meeting, the American Philatelic Society board chose sites for its 2019 winter show and the 2020 summer show.

True, there are some rules listed at the beginning of the new manual, such as, the exhibitor must own the material shown, reproductions including forgeries must be identified, a multiframe display is limited to a maximum of 10 frames, and similar housekeeping requirements.

The lack of rules opens the door to collectors to show whatever they want in any manner they please. Creativity is encouraged. However, to obtain high awards, the guidelines in the new manual provide the paths to achieve them.

A significant change over earlier editions of the manual is the introduction of points for all exhibits. Each category of evaluation has a range of numerical points with a maximum total of 100 for the entire exhibit.

Points are not new. Earlier editions of the judging manual had points assigned for single-frame exhibits, youth exhibits and thematic exhibits. Now all categories of exhibits will be assigned points by the jury to show better where the exhibit’s strengths and weaknesses are.

Points sound like a good thing, but exhibitors must understand that judging is not a science. Points will vary from one jury to another, just as medals sometimes change for exhibits.

In the past, an exhibit might be on the cusp and therefore receive a gold medal one time and a lower vermeil award the next. Different juries bring different knowledge as well as viewpoints to the same exhibit.

Another significant change is that the point system brings with it an increase in the number of medals. Along with the traditional five medal levels of bronze through gold, exhibitors will see three new medals: large silver, large vermeil and large gold.

Each of these levels has a distribution of points and a point total that separates them.

Why the recent FIP election is stirring up strong dissent among the APS and others: The United States and Great Britain were unexpectedly shut out from philately’s worldwide organizing body.

The point system is widely practiced at most shows abroad and especially at the worldwide international exhibitions. What might seem like a problem to an exhibitor is obtaining 83 points from one jury and 81 from another, even though the medal level is the same. However, there will be some variance like this from time to time.

More important than just the points are the judge’s comments on the universal exhibit evaluation form (UEEF). The jury uses these comments in conjunction with the points to convey to the exhibitor what needs to be done to improve in a particular area.

Treatment is a major category and if the organization is poor, the flow difficult to comprehend, or the material insufficiently explained, the points assigned for treatment will suffer accordingly.

The term “division,” as in Revenue Division, Illustrated Mail Division and Postal Division, is no longer used to classify different types of exhibits. Instead, there are three classes of exhibits.

General Class includes these former divisions and many others, such as cinderella, aerophilately, stationery and so on. The other two are One Frame Class, and Youth Class.

The guidelines for the various sub-classes are individually discussed in a series of appendices in the manual. If you want to know what the guidelines are for a successful first-day cover exhibit, cinderella exhibit or astrophilately exhibit, be sure to read these sections.

At one time, the committee that carried out the overhaul of the sixth-edition manual was planning to go even deeper into subcategories such as military postal history exhibits, polar philately exhibits and similar specialties, but they were omitted to keep the manual to a handy guide and not a treatise of specialties.

As with earlier editions, a separate appendix deals with the responsibilities of exhibit judges, their apprenticeship, ethics and qualifications, along with the procedure for the feedback forum that provides suggestions to exhibitors for improving their displays.

The appendix also describes the function of the APS Committee on the Accreditation of National Exhibitions and Judges (CANEJ).

A major difference between the sixth and seventh editions is the page count: 120 pages in the former and only 66 pages in the latter. The leaner size makes the book more attractive to users. The brevity is successful and informs without being cumbersome or overburdening to the reader.

The seventh-edition manual is available free by downloading from the APS web site. You can then take the electronic form to an office supply store to print and bind it if you like.

For a small fee, APS will also provide a printed copy. Corrections and updates are easily dealt with by keeping the book online.

And changes there will be, as exhibitors and judges work with the guidelines and find ways to improve them.

The use of the manual will be a learning experience for exhibitors and judges alike. Since the manual was released in August 2016, many exhibitors are already revamping their exhibits to meet the new guidelines.

Effective January 2017, the reporting of points and use of the eight-medal system will be required at World Series of Philately shows.

Alan Warren is a nationally accredited philatelic and literature judge. He received the APS John N. Luff award for exceptional contributions to philately in 2002, and the Charles J. Peterson Philatelic Literature Life Achievement award in 2012.

The APS Manual of Philatelic Judging and Exhibiting and the accompanying exhibit evaluation forms can be found online.