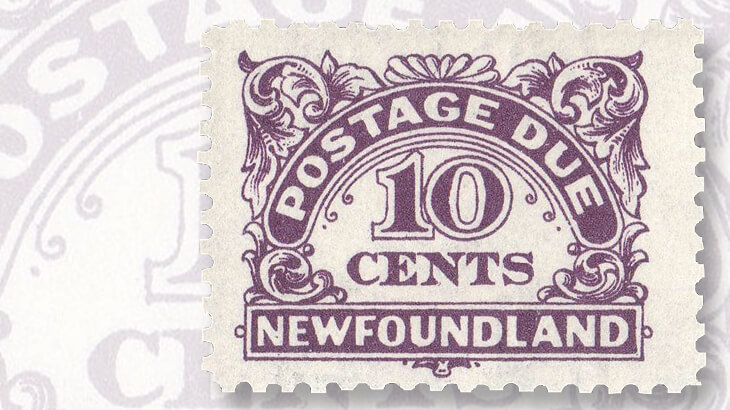 The 1949 Newfoundland 10¢ Numeral postage due stamp (Scott J7) is hard to find and worth full 2017 Scott Classic Catalogue of Stamps and Covers 1840-1940 values in unused hinged condition, mint never-hinged condition, and used condition.

Newfoundland, a large, rocky island off the eastern coast of Canada, became an English colony in 1583 and attained dominion status in 1907.

Newfoundland issued its first postage stamps in 1857 and continued to issue stamps until its federation with Canada in 1949. Stamps of Newfoundland are popular with Canada, British North America, British Empire, and classic stamp collectors.

Newfoundland issued a total of seven postage due stamps (Scott J1-J7) with a simple Numeral design from 1939 to 1949. The first six, denominated 1¢ to 10¢, are perforated gauge 10 to 10½ and compound on unwatermarked paper.

In 1949, another 10¢ postage due stamp was issued on Coat of Arms watermarked paper perforated gauge 11 (Scott J7). The 2017 Scott Classic Catalogue of Stamps and Covers 1840-1940 values this stamp at $11 in unused hinged condition, at $15 in used condition (with the value in italics), and at $19 in mint never-hinged condition.

Although the values are not much different, this is a much more difficult stamp to find than the 10¢ stamp on unwatermarked paper. Check your collection and dealers’ stocks for examples that might have been misidentified. The watermark can be difficult to see.

The easiest way to tell the difference is by the perforation gauge. It is also on thinner paper with crackly gum. Both stamps are described in the Scott catalog as dark violet, but to our eyes, the stamp listed as Scott J7 is a more reddish violet color. This stamp is a good buy at the Scott catalog values. The Scott catalog notes that used examples with dated cancels bring triple the price of those with undated cancels.