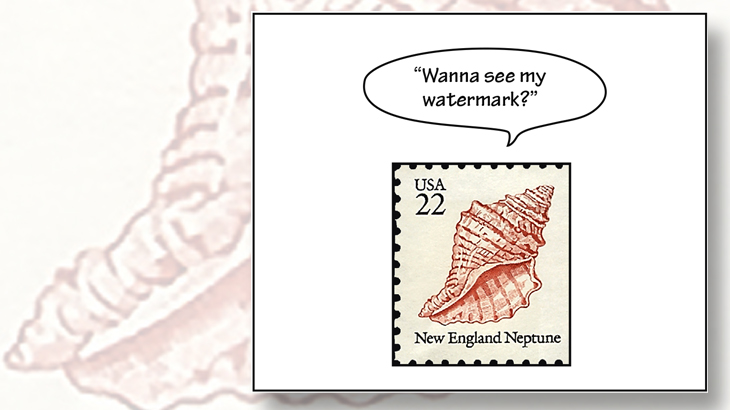 As this is written, the presidential election is a month in the rear-view mirror, but to mix a metaphor, the melody lingers on for many who entered the November cartoon caption contest that featured the 22¢ New England Neptune stamp (Scott 2119) from the 1985 Seashells booklet.

Your task was to hold the shell up to your ear and tell me what you heard from within.

The theme of the political entries focused on what seems like a great sigh of relief that the electioneering is over. This thought was nicely captured by John Hostetter of Lancaster, Pa., who heard: “The election is over. I now return you to sounds of the sea!”

I will mostly avoid partisan thoughts, but several entries aimed their venom at the other end of Pennsylvania Avenue. An example comes from Fern Gagnon of Biddeford, Maine: “A lobster in every pot! No more shell games in Congress!”

Another group of entries used a familiar tongue twister as the theme. From Edgar Dunlap, sent by email, comes, “Try saying ‘She sells seashells by the seashore’ ten times.”

The winner in the nonphilatelic part of the contest is from Robert Branco of Philadelphia, Pa. His message from the shell is, “HELP! I need a coat of shell-lac!”

On the philatelic side, Simon Halburian of Saguache, Colo., came up with a slightly suggestive line from the seashell.

“I’m just a shell of my former self!” by Charles Cross of Stockton Springs, Maine.

“We mollusks consider ‘Snail Mail’ to be a compliment!” from Gordon Trotter of Sarasota, Fla.

“I find the current group of candidates ‘un-conch-ionable’!” also from Steve Kotler.

“Knock Knock. Who’s there? Conch. Conch who? Conch you hear the ocean?” from Dave Schwartz of Commack, N.Y.

“I know where Jimmy Hoffa is buried!” by Laura and Tom Tomaszek of Cedar Rapids, Iowa.

The next cartoon caption contest will be announced in the Jan. 9, 2017, Linn’s.