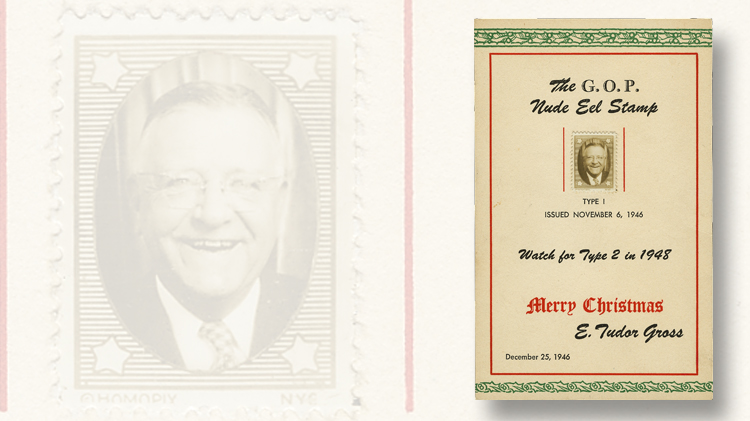 This 1946 Christmas card from E. Tudor Gross was something of a puzzle until Linn’s readers explained it.

I don’t usually think of myself as dense, but I sure missed the boat here. Linn’s readers were quick to respond to my request for help to decipher the card.

Nineteen readers did so, and two of their messages are presented here.

The first is from Danforth Guy, who wrote: “The U.S. went to the polls in mid-term elections held on Nov. 5, 1946. This ‘stamp’ was issued the very next day, once Republicans (the GOP) had taken control of both the House and Senate for the first time since the 1920s. There was no 1947 stamp issue because the next election would not be until 1948’s presidential election.

“Given the results of Nov, ’46, it was presumed that Harry Truman was going to lose the ’48 election. From this card, I would guess Mr. Gross was a GOP supporter, and looking forward to a Republican victory in 1948 that he would commemorate with the Type 2 stamp.

“Since Truman actually won, there was likely no type 2 stamp. As for ‘Nude Eel’, that’s a play on FDR’s New Deal.”

A slightly different perspective came from Morton Laby: “I can tell you that the GOP Nude Eel stamp is a takeoff on the Democrat’s New Deal stamp — i.e. the 3¢ stamp (Scott 732) showing a group of workers, issued to commemorate the National Recovery Act.”

He then goes on to agree with Guy’s take, but ends with, “So we old geezers remember a few things which you young whippersnappers don’t … By the way, I first subscribed to Linn’s as a youngster during WWII, when the subscription price was 25¢ a year!”