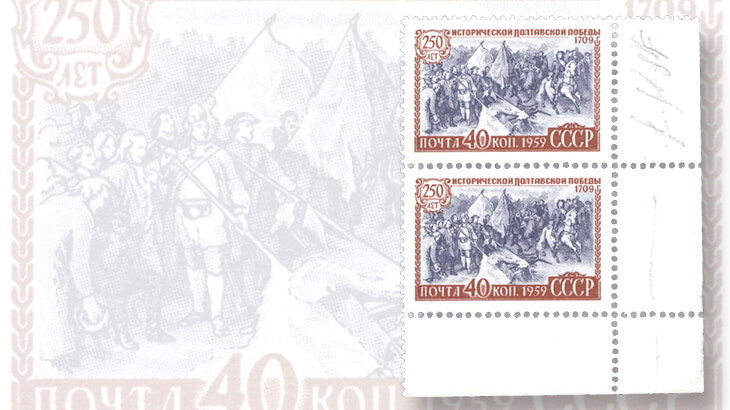 An unissued pair of stamps from the Soviet Union, marking the 250th anniversary of the Battle of Poltava, sold for $20,400 during David Feldman’s late fall auction week in Geneva. It may be the unique multiple among 40 known examples. 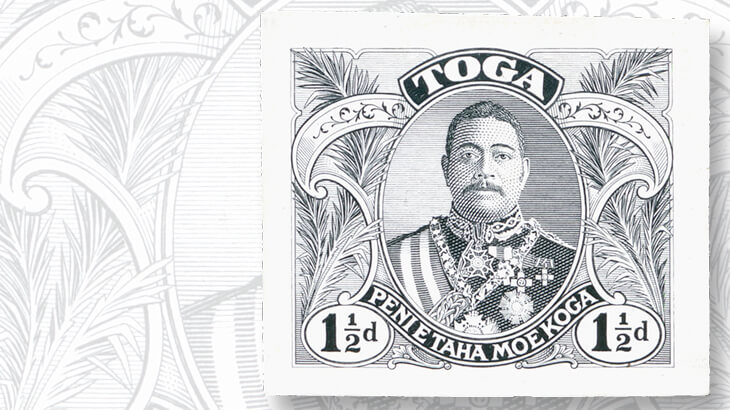 A collection of letter cards issued by Tonga in 1911, including this die proof, brought $1,400 at the fall auction by David Feldman in Geneva. 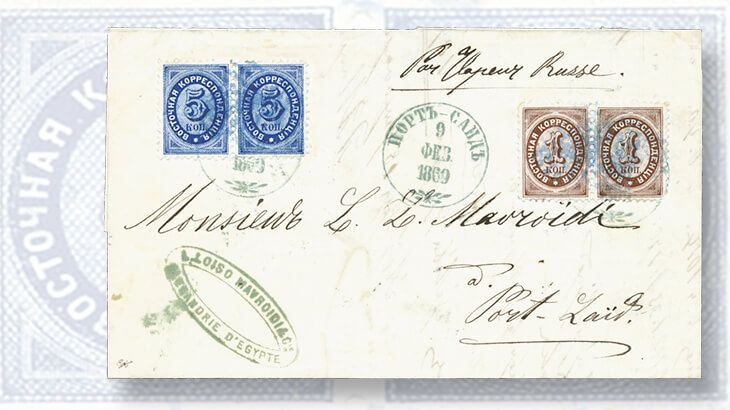 Russian ship mail in David Feldman’s fall auction in Geneva included an 1869 folded letter from the Russian post office in Alexandria to post office at Port Said, Egypt, franked with pairs of 1868 stamps of the Russian Offices in the Turkish Empire. It so 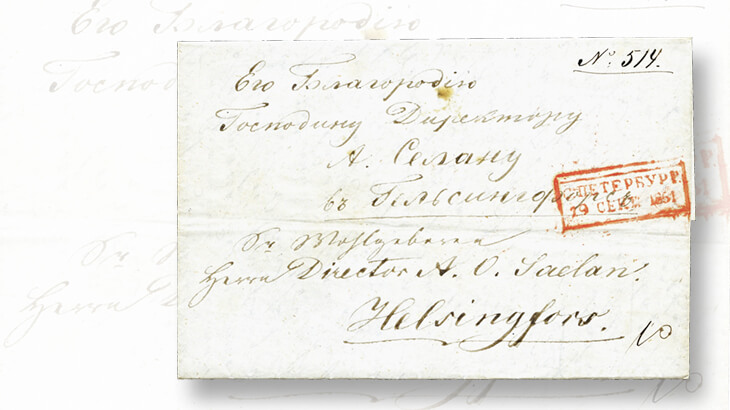 An 1851 stampless cover sent to Helsinki, Finland, from New Archangel, in the Russian province of Alaska, brought $22,800 at David Feldman’s sale. 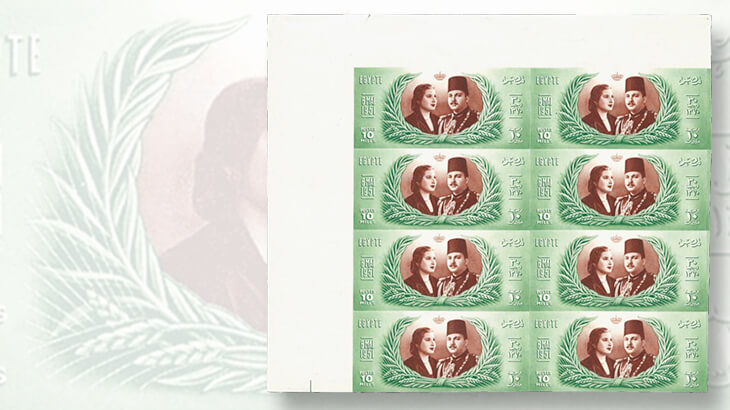 David Feldman’s sale week in late fall in Geneva, Switzerland, included an “extremely rare multiple” of a block of eight of a 1951 Egyptian issue for the wedding of King Farouk and Queen Narriman. This imperf corner-margin block of eight sold for about $2 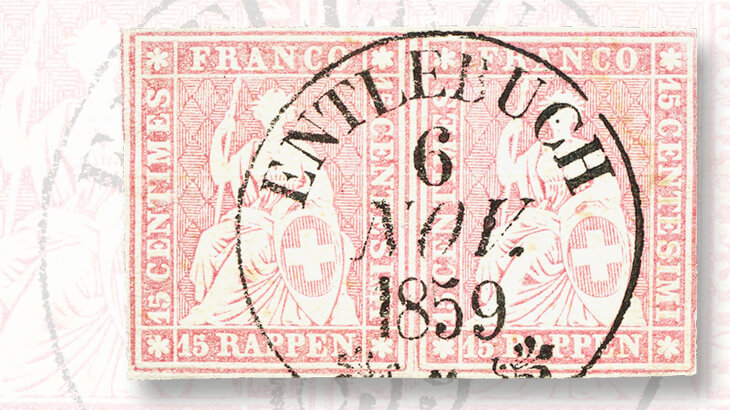 A pair of Sitting Helvetia stamps from the Herbert Brach collection of the 1854-62 imperforate issue is shown here. David Feldman offered Brach’s extensive collection in Geneva in late fall, selling it for $49,250.
Previous
Next

The highlights of David Feldman’s Autumn Auction Week of sales from Nov. 28 to Dec. 3 in Geneva were the Mauritius “Post Office” printing plate and a half-dozen related items, previously reported in Linn’s issue of Dec. 26, 2016.

Plenty of other rare and interesting items were offered throughout the rest of the week. Among the worldwide highlights were a number of proof sheetlets and imperforate blocks of Egyptian issues.

One of the most visually striking was an imperf corner-margin block of eight of the 10-millieme issue for the May 6, 1951, royal wedding of King Farouk and Queen Narriman (a variety of Scott 291).

Farouk had divorced his first wife, Queen Farida, after she bore three daughters but no sons, and sought a new wife in an effort to perpetuate his dynasty with a male heir. Narriman, a commoner, was 18 at the time. Despite the prompt birth of their son, Farouk was deposed in a coup in 1952 and went into exile. Narriman returned to Egypt without him, and they divorced in 1954. He died in exile in Rome in 1965; she remarried twice and died in 2005.

A section of the Feldman auction devoted to Russian ship mail included an 1869 folded letter from the Russian post office in Alexandria to the one at Port Said, Egypt, franked with pairs of 1868 1-kopeck and 5k stamps of the Russian Offices in the Turkish Empire (Scott 8 and 10) and crisply canceled with both offices’ postmarks.

An 1851 stampless cover was sent to Helsinki by a Finnish naturalist working in the Russian province of Alaska. The letter was posted at New Archangel, which was later renamed Sitka, and traveled to Finland, then also part of Russia, via St. Petersburg.

Alaska was sold to the United States in 1867, and letters dating before that time are “exceedingly rare,” according to Feldman. This one sold for $22,800.

Among stamps offered was an unissued pair from the Soviet Union, honoring the 250th anniversary of the 1709 Battle of Poltava.

The battle, in which the Russian forces of Czar Peter the Great routed the Swedish army under Charles XII, supported by Ukrainian forces, is considered a historic turning point for both sides: for Russia, a positive one, but marking the beginning of the end of Sweden’s time as a major European power.

Realizing that the stamp issue would be politically delicate given his planned visit to Sweden in August 1959 (canceled in late July), Soviet leader Nikita Khrushchev had the stamps withdrawn. Only about 40 examples are thought to survive, and the never-hinged pair in the Feldman sale, which might be a unique multiple, went for $20,400.

An extensive, specialized exhibit-collection of Switzerland’s 1854-62 imperforate Sitting Helvetia issue, assembled by Herbert Brach and forming the basis for his book published in 2000, contained an in-depth study of the paper types, shades and varieties of silk threads embedded in the stamp paper for security reasons, as well as postal history of the issue.

The collection was accompanied by more than 100 certificates for the more noteworthy items. It sold for $49,250.

Another specialized collection in the sale explored the letter cards issued by the Pacific island of Tonga in 1911.

Letter cards, which were sealed by wetting the gummed edges and then opened by tearing them off, were considered superior to postcards because they offered more space to write, while still being more convenient than conventional letters. They had one major drawback: In a humid, tropical climate, the gum would stick prematurely, rendering the cards useless.

The collection included a variety of interesting examples of the cards’ use as well as a handsome die proof of the 1½-penny indicium showing a full-face portrait of Tonga’s king, George II, under the country name “Toga,” which was the favored spelling at the time. The group sold for $1,400.