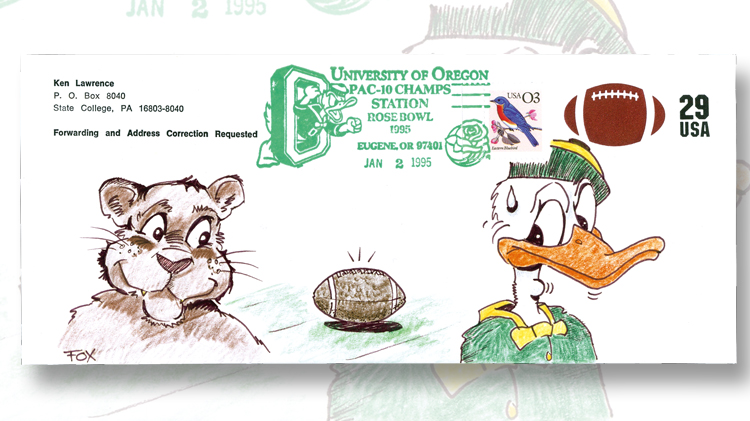 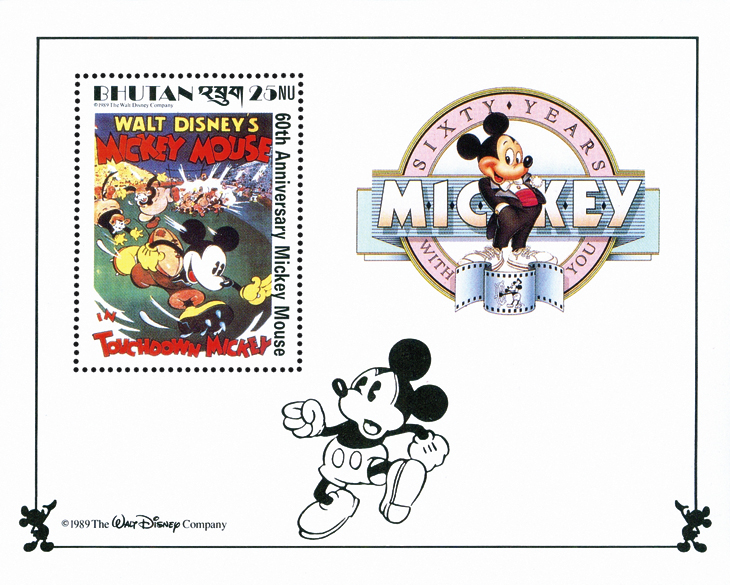 The source of the cachet design was a poster that advertised the Walt Disney animated cartoon Touchdown Mickey, which was screened in theaters throughout America in 1933. Bhutan reproduced the poster on a 1989 souvenir sheet. 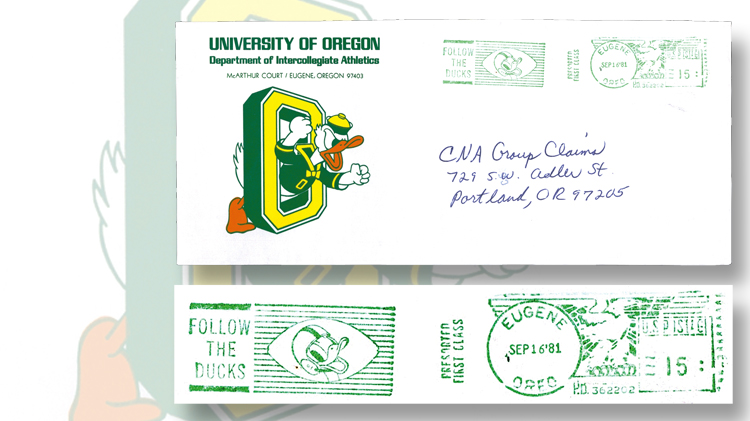 Walt Disney’s Donald Duck is the mascot of the Ducks, the University of Oregon athletic teams. The postage meter imprint on this 1981 cover shows Donald in a football helmet. 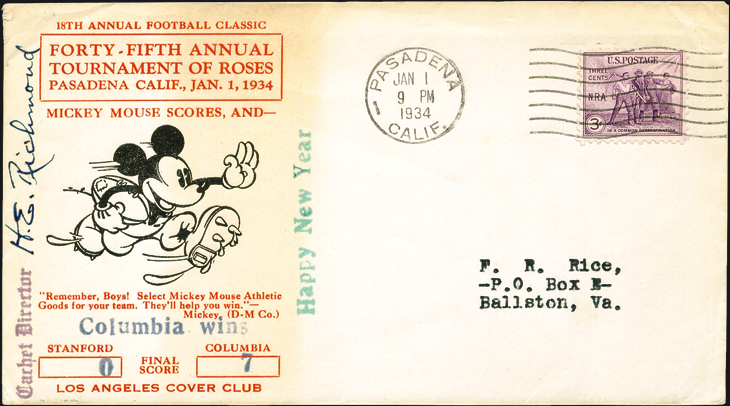 Walt Disney’s Mickey Mouse, portrayed as a football running back, was featured in a cachet that commemorated the 1934 Rose Bowl.
Previous
Next

In a recent Linn’s Auction Roundup segment, Matthew Healey asked, “How exactly did a Los Angeles Cover Club cachet honoring the 1934 Rose Bowl, at which Columbia famously defeated Stanford 7-0 on a rain-drenched field, come to use a figure of Mickey Mouse, pigskin tucked under his arm, charging down the field?”

A cover decorated with that cachet had sold as part of a large Walt Disney topical collection at an Oct. 11-15 Christoph Gaertner auction in Germany. The collection realized $355,500.

A matching cover from my collection is pictured nearby. Here is the answer to Healey’s question:

Touchdown Mickey was a six-minute black-and-white animated cartoon that Walt Disney released Oct. 5, 1932. In a game that pitted Mickey’s Manglers against Pete’s Alley Cats, the Manglers came from behind to tie the score at 96-96 with one minute to go in the fourth quarter. Mickey then scored the winning touchdown in the last second of play.

Disney’s short film played in theaters across the country in 1933, providing comic relief to Americans suffering from the Great Depression, while the newly elected president, Franklin D. Roosevelt, struggled to put the country back to work. Posters that advertised the movie seemed to be everywhere.

A 1989 souvenir sheet of Bhutan reproduced it. Disney licensed the design to cachet director H.E. Richmond for the 1934 Rose Bowl cover cachet.

Mickey isn’t the only Disney cartoon character identified with football. Donald Duck is the mascot of the University of Oregon Ducks athletic teams. Donald wearing his football helmet is pictured in the postage meter imprint on the illustrated cover.

Donald Duck was also featured in a 1995 Rose Bowl pictorial cancel. The game was played on Jan. 2 because New Year’s Day fell on a Sunday. On that occasion, the Penn State Nittany Lions beat the Oregon Ducks 38-20.

I commissioned caricaturist Fred Fox to paint a set of five original cachets on my covers that commemorated the game. One is shown here. Fox is on the staff of the American Philatelic Society, which was located in State College, Pa., in 1995 and today is located in nearby Bellefonte.