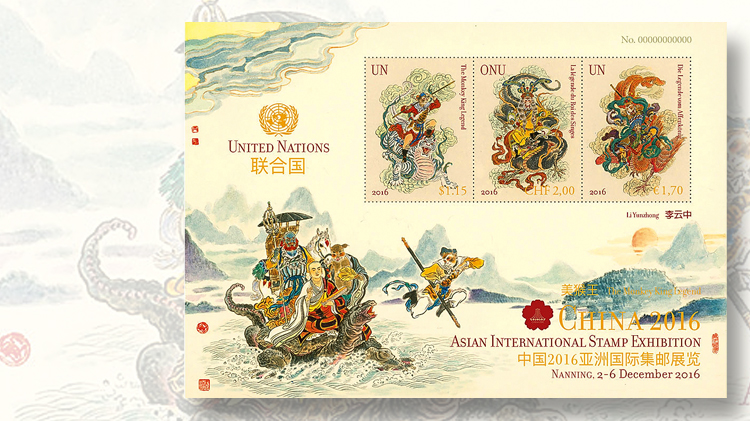 The designs feature the Monkey King, a main character in the 16th-century Chinese novel Journey to the West.

In announcing the new souvenir sheet, the UNPA said, “The novel is an extended account of the legendary pilgrimage of the Tang dynasty Buddhist monk Xuanzang and his protectors who traveled to Central Asia and India to obtain the Buddhist Scriptures.”

The tale of the Monkey King, also known as Sun Wukong, has been retold numerous times in different media, including opera, plays, films, animated series, and postage stamps.

The designer of the U.N. souvenir sheet, Li Yunzhong, also designed China’s Journey to the West stamps issued May 3, 2015, and served as the art consultant for the recent animated film Monkey King Thrice Beats White-bone Demon.

This is the second UNPA event souvenir sheet with stamps in three currencies; the first was issued earlier this year on Aug. 10 for the 32nd Asian international stamp exhibition, held Aug. 10-15 in Bangkok, Thailand (Linn’s, Aug. 8, page 10).