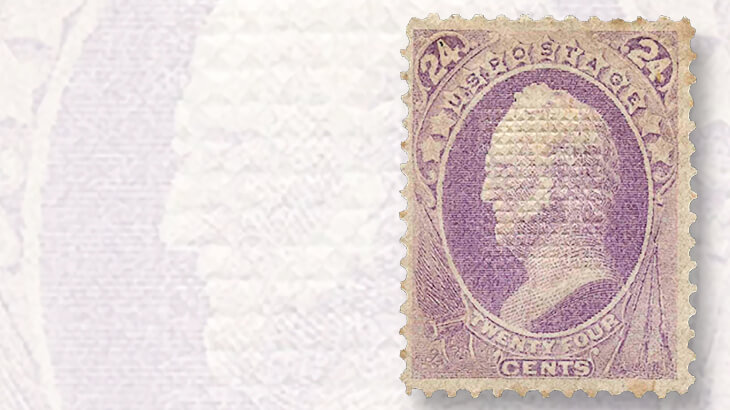 The 1870 United States 24¢ purple Gen. Winfield Scott stamp without grill (Scott 153) is a good buy in very fine grade and without defects in used condition at the 2017 Scott Specialized Catalogue of United States Stamps and Covers value of $230.

Gen. Scott served in the War of 1812, the Black Hawk War, the Mexican-American War, the Second Seminole War, and the Civil War. He devised the Anaconda Plan, the Union strategy that eventually won the war. In 1852, he was the Whig Party’s nominee for president of the United States.

In 1870, the United States issued a 24¢ purple Gen. Winfield Scott stamp. The 2017 Scott Specialized Catalogue of United States Stamps and Covers lists five stamps with this design (Scott 142, 153, 164, 175, and 200). None of them are cheap, some are prohibitively expensive, and many collections don’t have a sound example of even the least expensive one.

The 2017 Scott U.S Specialized catalog values the least expensive, the 1870 purple stamp without grill (Scott 153), at $230 in used condition. This is a good price for an example in the grade of very fine with no faults or defects.

Examples with crisp unfaded color are hard to find. Be careful of reperforated examples and those with faint creases or minor flaws. For a really nice example it’s worth the effort and expense of getting a certificate.

If that is too rich for your blood, you can find examples in lower grades or with minor defects at ascending levels of discount based on grade, appearance, and type of defect.