Love Skywriting forever stamp: When and where it will debut 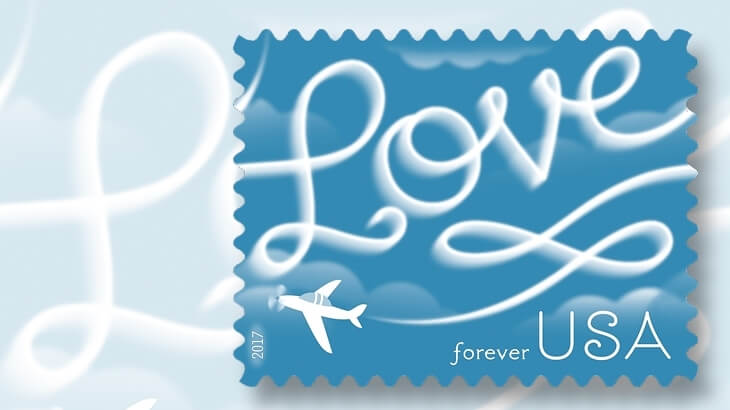 The United States Love Skywriting forever stamp will be issued Jan. 7 in Chino, Calif., with a first-day ceremony that will be followed by a skywriting demonstration, weather permitting. 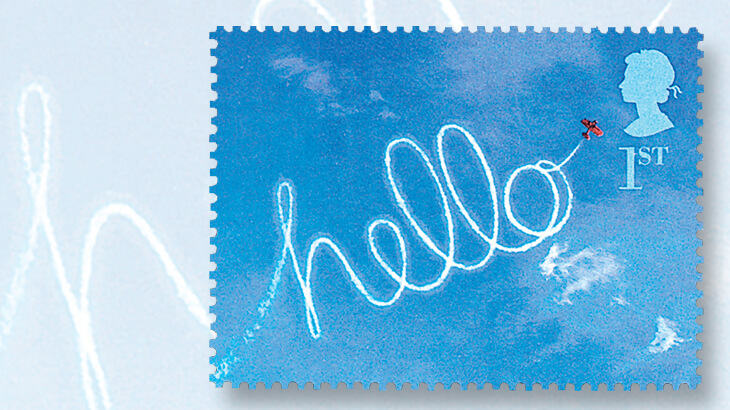 A 2002 nondenominated first-class stamp from Great Britain’s Royal Mail features a skywriting airplane to share a friendly “hello.”
Previous
Next

A small white airplane spells out “Love” in skywriting on a fanciful new forever stamp from the United States Postal Service.

The latest entry in the U.S. Love stamp series is being issued Jan. 7 in panes of 20.

If the weather cooperates, the 10 a.m. first-day ceremony in Chino, Calif., will be followed by a skywriting demonstration “to replicate the stamp image,” scheduled for noon.

These events are taking place at the Planes of Fame Air Museum, 7000 Merrill Ave., No. 17, in Chino. The program will begin with a discussion about a World War II Curtiss P-40 Warhawk and how the plane was used for mail delivery during the war, according to the Postal Service.

The ceremony announcement stipulates that admission to the ceremony is free “to the first 300 attendees.”

If the weather presents a problem, the skywriting demonstration will be rescheduled for the following day.

“The Love Skywriting stamp will add a sweet, romantic touch to letters and cards, not only on Valentine’s Day, but all year round,” the Postal Service said in its stamp announcement.

“The stamp art depicts the word ‘Love’ written in white cursive script against a blue sky studded with wispy clouds. Underlining the word is a decorative swirl of smoke. A small, stylized plane, dwarfed by the giant letters, completes the end of the swirl, with smoke trailing from its tail.”

Louise Fili designed the stamp and its typography. It was illustrated by Jessica Hische, with Derry Noyes serving as art director.

This is the fourth U.S. Love stamp design for Hische, a freelance illustrator and letterer based in San Francisco, Calif.

The 2012 Love Ribbons forever stamp shows her illustration of the word “Love” spelled out with curling ribbon (Scott 4626).

Hische also illustrated the 2013 Sealed with Love forever stamp; her design conveys an envelope flap closed with a red wax seal containing a heart set within a circle of delicate curling ornamentation (4741).

The first U.S. Love stamp, with a graphic design based on Robert Indiana’s Love sculpture, was issued with an 8¢ denomination in 1973 (Scott 1475).

The Postal Service began issuing Love stamps more frequently in 1982, and in all has issued some 50 stamps with the Love theme, including major varieties showing similar designs. Love has also been the subject of several stamped envelope issued by the USPS.

Since 2006, the Postal Service has also routinely offered pairs of stamps designed for use with wedding announcements and reply envelopes, denominated with 1-ounce and 2-ounce rates.

The art of skywriting is documented as early as 1915, just a dozen years after the Wright Brothers’ history-making flights at Kitty Hawk, N.C.

In an online series on the history of flight, NBC News reported that stunt pilot Art Smith used flares to accomplish a form of skywriting on the closing night of the Panama-Pacific International Exposition in San Francisco.

“Smith later went on to work for the U.S. Post Office as one of the first air mail pilots,” according to NBC.

Over the years, skywriting pilots have used oil products heated with airplane engine exhaust to create the smoke for letters and symbols that convey messages in the sky.

Technical details and first-day cancel ordering information for the U.S. Love Skywriting forever stamp can be found in the box on this page TK.

Standard ordering instructions apply. Collectors requesting first-day cancels are encouraged to purchase their own stamps and affix them to envelopes. The first-day cover envelopes should be addressed for return (a removable label may be used), and mailed in a larger envelope addressed to Love Skywriting, Stamp Fulfillment Services, Cancellation Services, 8300 NE Underground Drive, Pillar 210, Kansas City, MO 64144-9998.

Requests for first-day cancels must be postmarked by March 7.