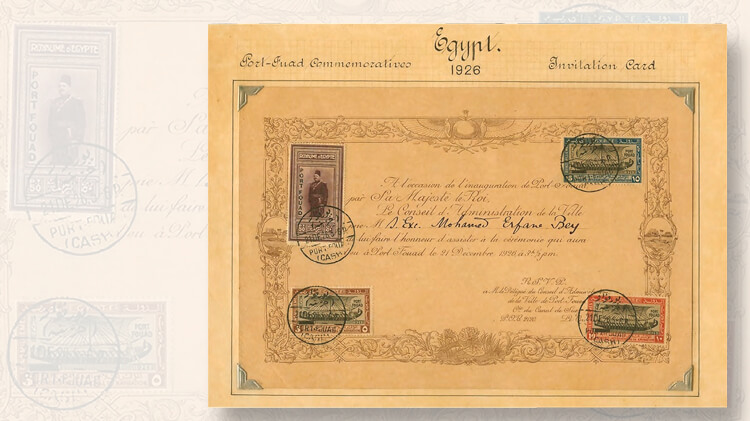 A printed invitation to the opening of Egypt’s Port Fouad, with four stamps tied by Port Fouad postmarks dated Dec. 21, 1926, sold for about $7,250 at the Stanley Gibbons auction on Nov. 24 in London. The port was built to relieve congestion at Port Said.

Stanley Gibbons held a sale of worldwide stamps and postal history on Nov. 24 in London. Bidding took place live, by mail and online.

Among the more unusual items was a printed invitation to the ceremonial opening of Egypt’s Port Fouad in 1926.

Port Fouad was built by King Fouad I, the father of Farouk, at the northern end of the Suez Canal to relieve congestion at Port Said, which lies opposite. A set of four stamps overprinted “Port Fouad” was issued to mark the occasion (Scott 121-124).

The ornate, French-language invitation, with the four stamps tied by Port Fouad postmarks dated Dec. 21, 1926, sold for about $7,250, including the firm’s 18 percent buyer’s premium.