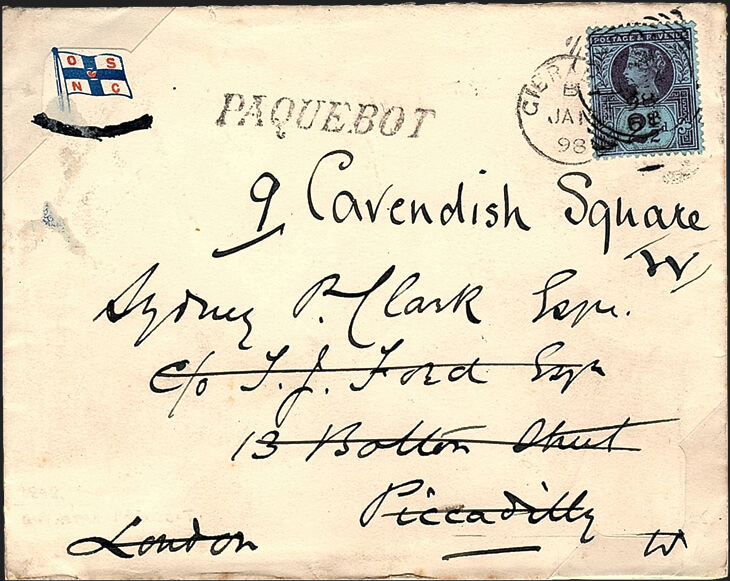 This attractive 1898 paquebot letter was carried on board a ship of the Oceanic Steam Navigation Co., and franked with a British stamp with two Gibraltar postmarks. (Thanks to Morris Taber for this image.) 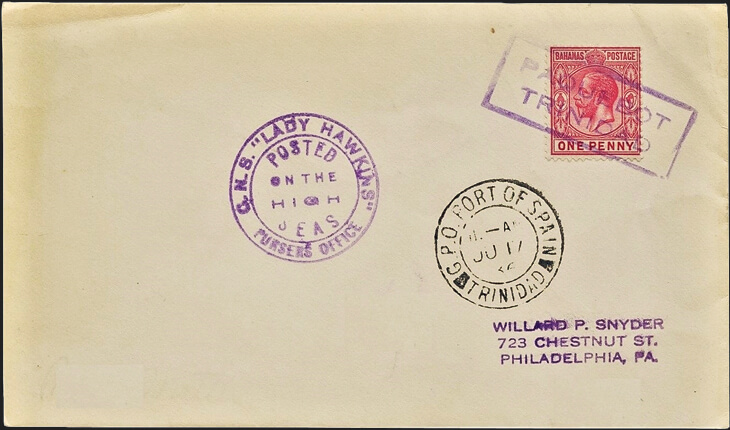 This paquebot letter carried on the Lady Hawkins, a ship of Canadian registry, in 1936 is franked with a Bahamas stamp and received a postmark in Trinidad. How can we explain this? 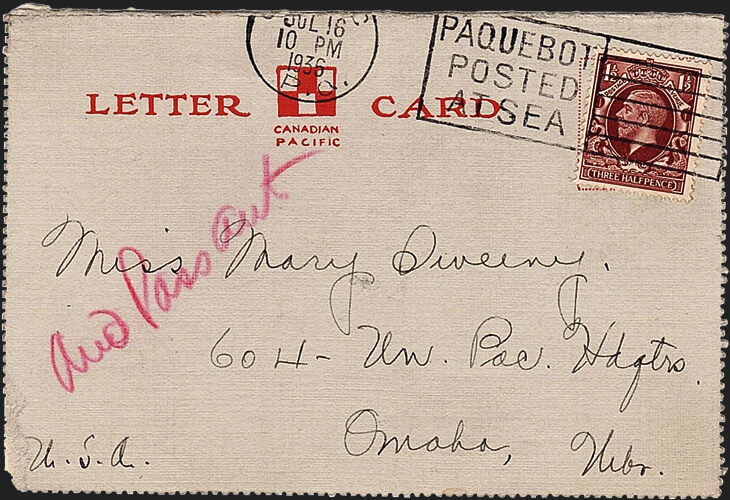 This letter card was mailed aboard a steamship of the Canadian Pacific line in 1936. Why is it franked with a Great Britain stamp?
Previous
Next

Have you ever acquired a cover that has a handstamp of “PAQUEBOT”? Do you know what it means?

The word in French translates literally to “ship,” but the letter card shown in the first illustration has a good handstamped postmark that not only cancels the 1½-penny British stamp, but also describes in four words what paquebot means in the context of mail: “PAQUEBOT/POSTED/AT SEA.”

To the left of the paquebot cancel is the red and white logo of the huge Canadian cargo and passenger shipping company known in that era as Canadian Pacific Steamships Ocean Services Ltd., usually called simply “Canadian Pacific.” The postmark date is July 16, 1936.

Putting those pieces together, you can deduce that the letter card was mailed on board a Canadian Pacific steamship, to be sent to an address in Omaha, Neb., but why was the affixed stamp from Great Britain?

Within the letter, the writer indicates she was leaving Canada on the RMS Empress of Britain. A little searching on the Internet reveals that “RMS” stands for Royal Mail Ship. The Empress of Britain was one of 11 new steamships that Canadian Pacific purchased to replace vessels it had lost in World War I, and the ship provided trans-Atlantic passenger service between Canada and Europe, spring to autumn, from 1931-39.

So the question remains: If the writer and her letter card departed from Canada, why was the affixed stamp British?

The Universal Postal Union (UPU) created procedures for a variety of international postal regulations. Accordingly, mail posted aboard a ship in international waters was entitled to be franked with stamps of, and in accordance with the postal rates of, the country of the ship’s registry.

The “RMS” prefix gives the impression of a British ship, and in fact, the RMS Empress of Britain was registered in London, so passengers on the ship would use British stamps when depositing mail aboard the vessel.

The second illustration shows a piece of mail that looks to be a little more complex, with a Bahamas stamp; a “PAQUEBOT TRINIDAD” handstamp; a postmark of July 17, 1936, from Port of Spain in Trinidad; and a circular handstamp from the purser’s office of “C.N.S. Lady Hawkins.”

The “C.N.S.” stands for Canadian National Steamships, and the ship was registered in Halifax, Nova Scotia.

Why would a Bahamas stamp with a Paquebot Trinidad handstamp and Trinidad postmark be on a cover mailed from a ship registered in Canada?

The answer gets a little complicated, as it depends on where the ship was at the time of mailing. If the ship is in international waters, then the stamps should be those of the country from which the vessel is registered.

However, if the ship is in territorial waters (the part of the sea within a stated distance of the shore of a state), the UPU rules change, as follows: “Items posted on board ship during the stay at the two terminal points of the voyage or at any intermediate port of call must be prepaid by means of postage stamps and according to the tariff of the country in whose waters the ship is lying.”

So, with that rule in mind, the Bahamas stamp on this cover would have been affixed while the Lady Hawkins was in Bahamian territorial waters, and thereafter the cover was postmarked at docking in Port of Spain in Trinidad.

A much earlier (1898) paquebot cover, shown here courtesy of Morris Taber, appears in the final illustration. It has two postmarks: the Great Britain 2½d Victoria Jubilee stamp is covered with a squared circle Gibraltar postmark, and to its left is another Gibraltar postmark with the date “JAN 98.” In the upper-left corner of the cover is the flag logo of the Oceanic Steam Navigation Company, a prominent British shipping line. So there you have a letter bearing a British stamp that was postmarked from a British Overseas Territory, traveling on a British steamship to England.

Collecting paquebot covers is enthralling, along with being quite complicated at times. Fortunately, there are excellent reference books available: Paquebot Cancellations of the World by Roger Hosking, third edition, 2000; and an earlier book, Paquebot and Ship Letter Cancellations of the World, 1894-1951 by M.A. Studd, 1953. A History of the Ship Letters of the British Isles: An Encyclopaedia of Maritime Postal History by Alan W. Robertson is something of a rarity, but was reprinted by James Bendon in 1993.