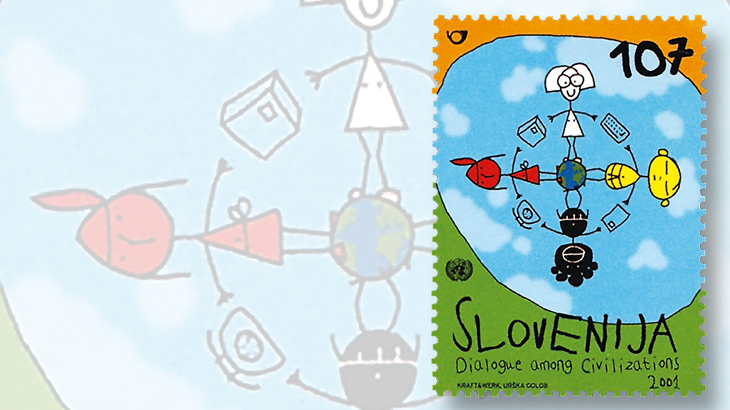 The entry from Slovenia won the stamp design contest for the multination United Nations Year of Dialogue among Civilizations issue organized by the Universal Postal Union. This design by Urska Golob was used as the common design by the vast majority of stamp-issuing entities that participated in this issue. The Slovenian stamp was issued Sept. 21, 2001. 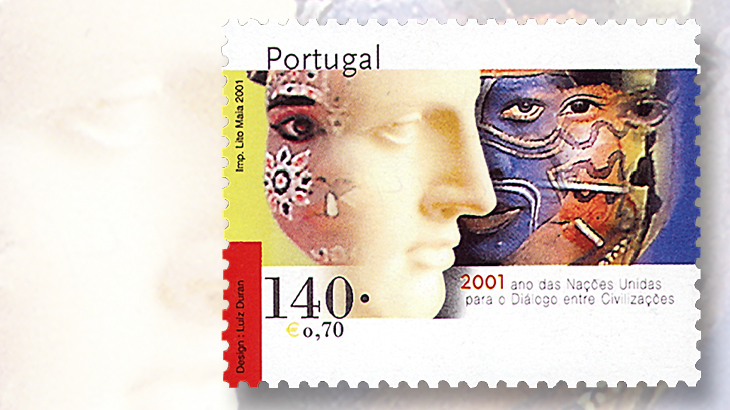 Portugal was among the few countries that didn’t use the common-design image in the 2001 Year of Dialogue among Civilizations issue, instead using its own design. 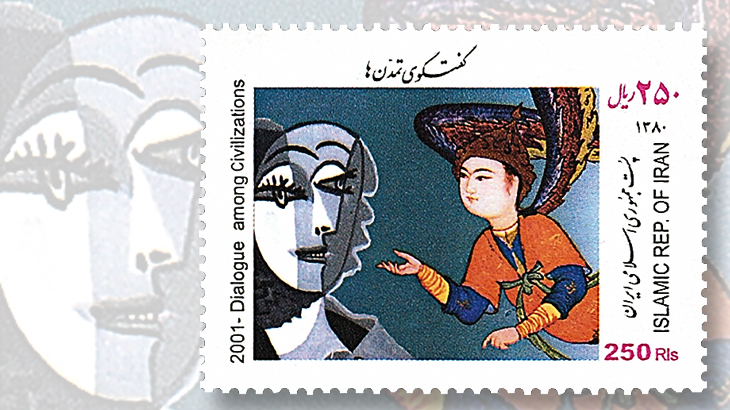 Iran issued two 250-rial Year of Dialogue among Civilizations stamps in 2001. One stamp featured the common design, and the other one (shown here) pictures Iran’s entry, which was the runner-up in the stamp design contest.
Previous
Next

Common-design issues have had a long history in philately.

Historically, a mother country would issue stamps for its colonies in a common-design format. Around the 1950s, stamp agents began designing and producing such issues for their client countries, resulting in large common-design or omnibus issues for events and anniversaries of the British royal family.

Common designs also have been used in joint issues between two or more countries or even for issues on a common theme, such as the emblem used by various countries for the International Cooperation Year in 1965, albeit in different colors and sizes.

However, the year 2001 saw a common-design issue with unprecedented characteristics. Called the Year of Dialogue among Civilizations, it was one of the largest common-design issues in philatelic history and unusual in that the vast majority of participating stamp-issuing entities were neither colonies nor represented by a central stamp agent who designed and produced the issue.

The colors and size of most stamps in this common-design issue were similar as well.

The idea for a dialog among civilizations was proposed by President Mohammad Khatami of Iran in 1998, and later that year the United Nations General Assembly declared 2001 as the Year of Dialogue among Civilizations.

Iran’s postal administration proposed the idea of an international stamp design competition to the Universal Postal Union in August 1999.

A total of 28 countries participated in this design competition. Iran, India, Poland and Slovenia were selected as finalists at the UPU headquarters in Switzerland.

The winning design by Urska Golob from Slovenia was chosen by the World Association for the Development of Philately at its meeting in October 2000 during the Espana 2000 world philatelic exhibition in Madrid, Spain.

The winning design features a children’s drawing of children of four races encircling the Earth with instruments of communication, including a letter, telephone, parcel and computer keyboard between them.

The backdrop of the design is a blue sky with white clouds.

More than 60 countries participated in this stamp issue with the vast majority using the winning design. Also, most countries issued stamps on or around Oct. 9, 2001, World Post Day. A few countries, such as Saudi Arabia and the Netherlands Antilles, issued their stamps in 2002 or 2003. Ironically, the United Nations Postal Administration did not participate in this common issue.

Some countries issued additional stamps showing their own designs, often that country’s entries in the design competition. For example, a stamp from Iran (Scott 2824) depicts the runner-up in the competition.

A few countries, such as Portugal (Scott 2444), used other designs completely instead of the common design.

The vast number of stamp-issuing entities and varying print runs of each stamp in the Year of Dialogue among Civilizations common-design issue make assembling a complete collection a challenge.

The catalog and/or market value for the stamps from some of the countries is quite high, namely Sudan, Oman and Senegal.

For the specialist, color varieties, perforation and printing errors provide further collecting opportunities for this most uncommon common-design issue.