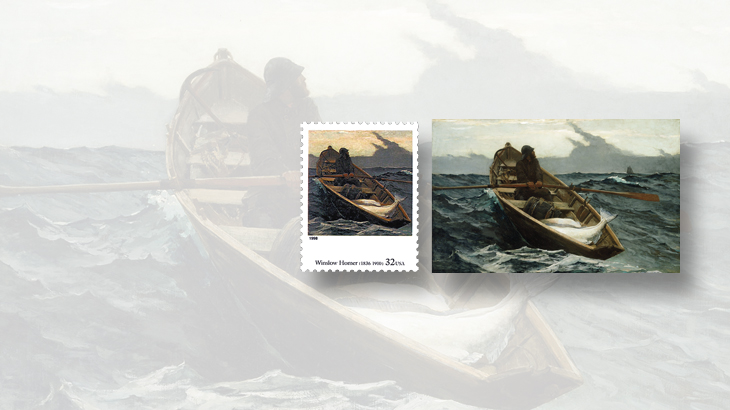 A Banks dory of the type schooners were built to carry beginning in the mid-19th century is featured in Winslow Homer’s painting The Fog Warning and on the 32¢ United States stamp adapted from that painting (Scott 3236j). The cropped stamp image eliminate 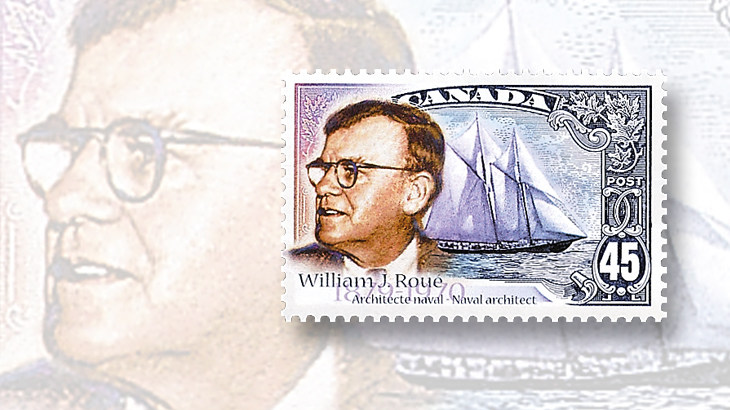 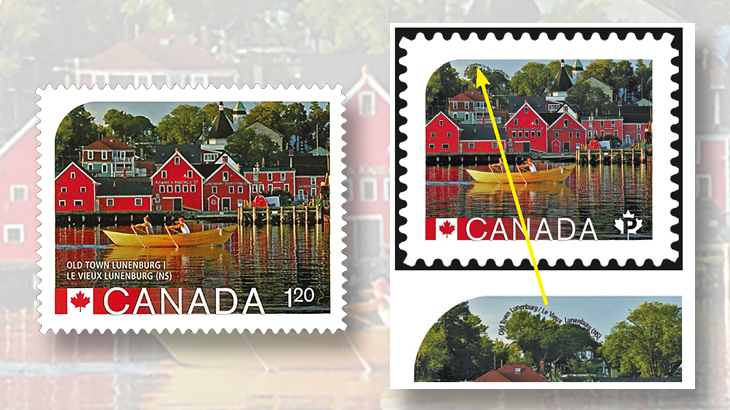 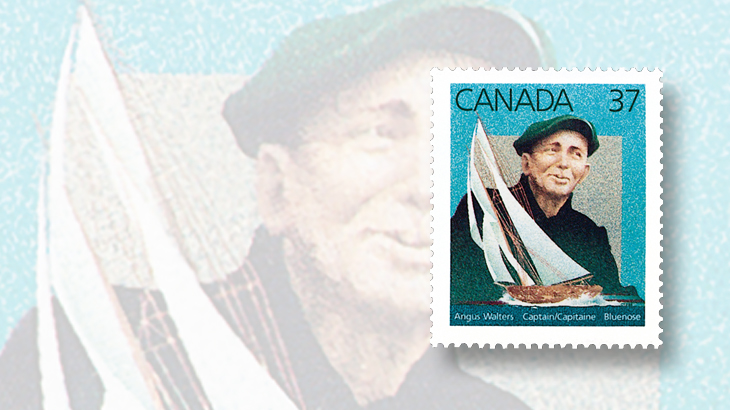 This 1988 37¢ Angus Walters stamp (Scott 1228) salutes the winning captain of the schooner Bluenose in its five International Fisherman’s Trophy wins between 1921 and 1938. Walters famously said in 1931, “The wood ain’t growin’ yet that’ll beat Bluenose.” 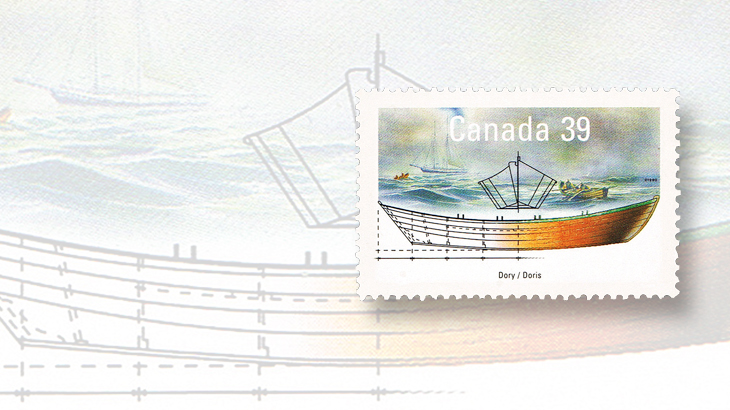 Humble little dories such as the one on this Working Boats stamp issued in 1990 (Scott 1266) were built by the hundreds in Lunenburg, Nova Scotia, and in Atlantic seaports in Massachusetts, New Hampshire, and Maine. 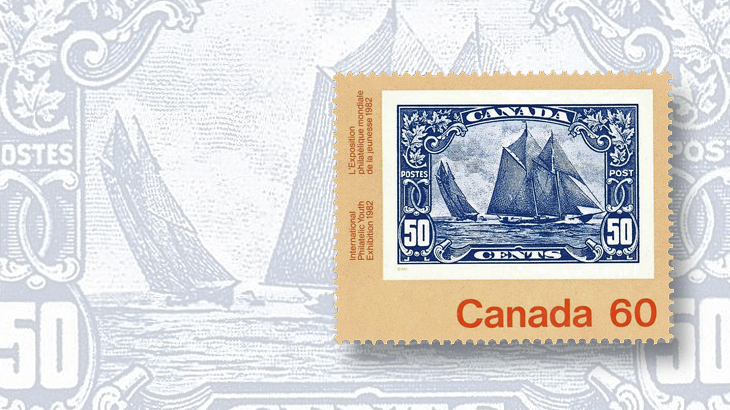 More than half a century after the 50¢ Bluenose was issued, this 60¢ stamp for a stamp exhibition in Toronto (Scott 913) conveyed its beauty to a new generation of collectors. 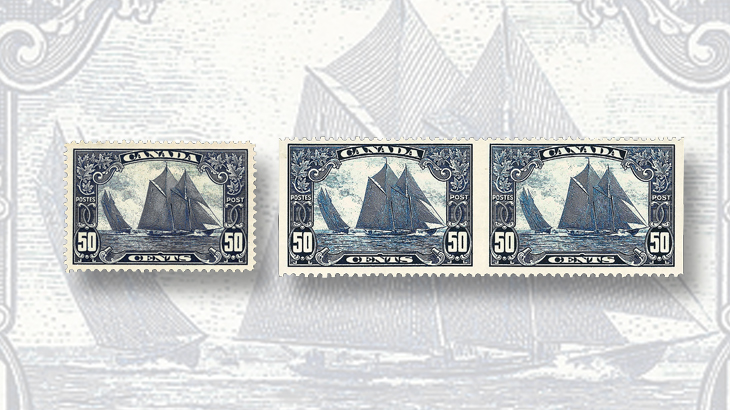 Regarded by many as the most beautiful Canada stamp of the 20th century, if not all time, the 1929 50¢ Schooner Bluenose (Scott 158) has delighted and challenged generations of Canada collectors. It is shown here along with a scarce imperforate-between er
Previous
Next

“Six degrees of separation” is the notion that everything is only a few short steps away from everything else.

This term’s widespread use in contemporary culture might be a side effect of worldwide email and social media, fueling the feeling that even in our vast and populous world, connecting with others is easier every day.

The same kind of connectedness is often noteworthy in stamp subjects or themes, each one connecting to another and yet another as time goes by.

The 24-millimeter by 20mm self-adhesive die-cut stamp was issued Jan. 11 along with four other stamps in booklets of 10 and 30, as well as in a perforated souvenir sheet with moisture-activated gum showing one each of the five different designs.

This definitive is in fact a recycled design. It was downsized from a 40mm by 32mm $1.20 Lunenburg stamp in a look-alike set of five UNESCO World Heritage site commemoratives issued May 20, 2014, as reported in Linn’s Feb. 1 issue, page 14.

These larger UNESCO stamps were denominated to pay the rate for a standard letter from Canada to the United States ($1.20) or to any other foreign destination ($2.50).

The 21-month-old $1.20 commemorative (Scott 2740) had text identifying the subject above the flag, just above the lower left corner of the stamp. The smaller 2016 definitive has the same information in much smaller microprinting around a tree near the top of the design.

But why Lunenburg? As Canada Post noted in its press release for the 2014 stamp, “The Old Town Lunenburg stamp showcases distinctive 18th and 19th century European-influenced architecture. And of course it is the home of the famous ship, the Bluenose II.”

Although boats are still built there, today tourism is the 263-year-old town’s foremost industry, attracting thousands of visitors each year.

The stamp celebrates the long, successful career of Canada’s greatest ship designer, a self-taught naval architect who mastered his passion and designed its greatest exponent, the schooner Bluenose (a nickname for Nova Scotians), pictured to the right of Roue on the stamp.

Only Roue’s 17th design and his first schooner, Bluenose was built at the Smith & Rhuland shipyard in Lunenburg and launched there on March 26, 1921.

It was designed as a working fishing schooner and succeeded brilliantly in that role, but the ship’s backers made no secret of their certainty that it would make a formidable competitor for the International Fisherman’s Trophy, which had been won during its inaugural season of 1920 by an American vessel.

Bluenose would exceed their fondest hopes, not only taking the trophy home to Canada in 1921, but in every one of the five completed competitions held over the next 17 years as well.

No less impressive was the Bluenose’s record as a fishing schooner, bringing to Lunenburg a record 646,000 pounds of fish in a single haul during 1923.

Canada issued a 43¢ Lunenburg Academy Centennial commemorative in 1995 (Scott 1558), marking the 100th anniversary of the only surviving 19th-century academy building in Nova Scotia. But despite the baffling addition of a ship’s hull underneath the school in its design, this stamp is not part of the chain we’re following.

Instead, the next genuine link is the 37¢ Angus Walters commemorative released in 1988 (Scott 1228), honoring the skilled captain who commanded Bluenose to five victories and piloted the schooner across the Atlantic to England in 1935 as part of Canada’s celebration of the 25th year of the reign of King George V.

A man who truly loved the ship, Walters said following its victory in 1931, “The wood ain’t growin’ yet that’ll beat Bluenose.”

Which brings us at last to a stamp often honored as Canada’s most beautiful: the 1929 50¢ Schooner Bluenose (Scott 158), shown with an imperf-between error pair of the stamp (Unitrade 158c).

Designed by Herman Herbert Schwartz and engraved by Harold Osborn, the stamp appears to show a dramatic ocean race, but in fact cleverly depicts two views of the world-renowned schooner racing itself off the Nova Scotia coast. (Given that Bluenose won all five of its trophy challenges, perhaps that just makes sense.)

The deep blue of the printing adds to the charm of the stamp, only heightening the sense of the schooner’s North Atlantic home and heritage.

Also shown nearby is a lithographed 60¢ stamp (Scott 913) depicting the 50¢ Bluenose, issued in 1982 as part of a stamp-on-stamp set of popular and historic Canada issues to salute an International Philatelic Youth Exhibition in Toronto.

And there you have the six degrees of separation between a new Canada stamp and what might be the most beloved Canada stamp ever.

But was Bluenose the most important vessel ever produced in Lunenburg? The answer is: absolutely not.

That distinction goes instead to a much more modest vessel — the humble dory illustrated on a 39¢ stamp (Scott 1266) in a 1990 quartet intended by Canada Post to depict “the role played by work boats during Canada’s early history.”

In truth, the larger generic boat on the stamp isn’t precisely the same as the Banks dory (named for Newfoundland’s Grand Banks where generations of fisherman worked these craft).

The Banks dory is a slightly shorter boat with oarlocks for one or two and room for gear, including 1,000 pounds or more of fish.

Reliable in choppy seas, Banks dories could be built quickly and cheaply. They nested neatly on the decks of large, fast schooners such as Bluenose, which not only deployed and collected them rapidly in the rich fishing grounds, but could then speed the catch back to port, where the freshest fish fetched the highest price.

Lunenburg and Shelburne, Nova Scotia, competed annually to see which would produce the greatest number of these handy little boats, but their biggest competition was south of the border. Boatwrights in Massachusetts, New Hampshire, and Maine produced remarkable numbers of them each year. Perhaps that is why I couldn’t find a Banks dory on a Canada stamp, but was directed to one painted by Winslow Homer on a United States issue, the 1998 32¢ Four Centuries of American Art commemorative picturing his 1885 painting, The Fog Warning (Scott 3236j).

Ironically, because of the format of the stamp design, the distant schooner on Homer’s painting was clipped off, robbing the image of much of its dramatic life-or-death tension.