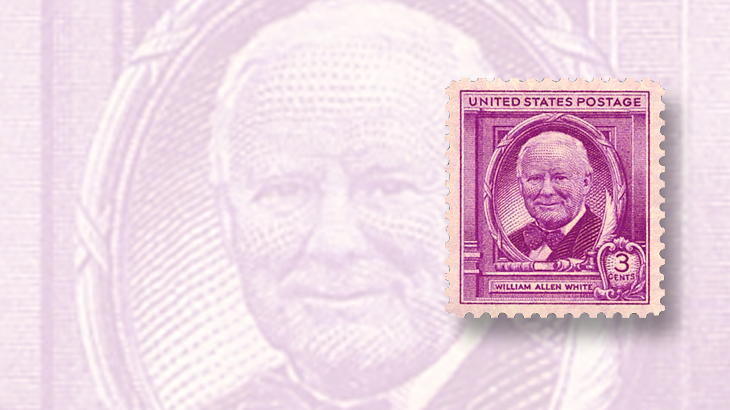 A 3¢ stamp honoring William Allen White was issued July 31, 1948, less than five years after the prominent writer and journalist died at age 75 in Emporia, Kans.

White was born in Emporia on Feb. 10, 1868, and studied at the College of Emporia and the University of Kansas before accepting an editorial position with the Kansas City Star.

By 1895 he was able to purchase the Emporia Gazette, a local paper that is actively published today. The following year, his widely read editorial “What’s the Matter With Kansas?” took aim at the failures of Populist Party leaders and served as campaign fodder for supporters of William McKinley for president.

White, a liberal Republican, came to represent small town values through his commentary, and became well-known throughout the country as the “Sage of Emporia.” In 1923, White won the Pulitzer Prize for his editorial “To an Anxious Friend,” warning against the suppression of free speech.

The following year, he was unsuccessful in his own campaign to be elected governor of Kansas.

Over the years, the influential editor was visited at his Emporia home by five different U.S. presidents. He died Jan. 29, 1944.