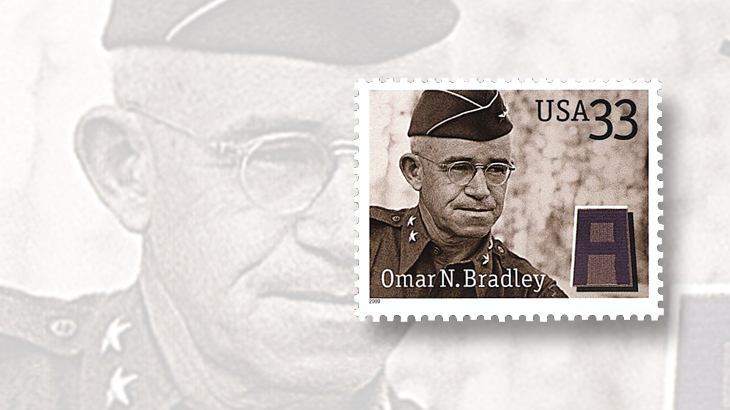 Gen. Omar N. Bradley was honored on a 33¢ commemorative in the 2000 Distinguished Soldiers set.

American military leader Omar Nelson Bradley was born in Clark, Mo., on Feb. 12, 1893. After graduation from Soberly High School, Bradley was accepted at West Point Military Academy where he was a classmate of Dwight D. Eisenhower.

As part of the 14th Infantry Regiment, Bradley was stationed on the border with Mexico during that country’s Civil War, and then served in the Pacific Northwest during America’s involvement in World War I.

He became an instructor in military science at the Infantry School at Fort Benning, Ga., beginning in 1929, under the command of George C. Marshall.

During the Second World War, Bradley led the II Corps in North Africa and helped to plan and execute the invasion of Sicily.

Eisenhower selected Bradley to lead the 1944 D-Day invasion of Normandy, France, and Bradley’s forces defeated the Germans at the Battle of the Bulge.