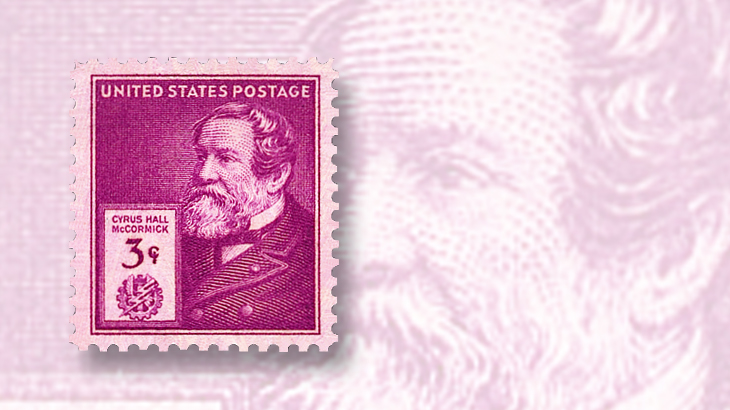 American inventor and businessman Cyrus Hall McCormick, on a 3¢ stamp in the 1940 Famous Americans series.

His father, Robert McCormick Jr., was a farmer who had worked on developing machinery to aid in his work, including a horse-drawn mechanical reaper and a threshing machine.

In 1831, Cyrus McCormick, the eldest of Robert’s eight children, worked on perfecting his father’s reaper. He obtained a patent in 1834, but struggled to win over farmers with his new invention.

During the 1840s, sales of his reaper slowly increased as McCormick continued to improve his product. He moved to Chicago to build his reapers in a new factory, and was joined by two of his brothers, who helped grow the business. His success brought him great wealth, much of which he donated to Christian charities.

McCormick died in 1884. His McCormick Harvesting Machine Co. became the International Harvester Co. following a 1902 merger. In the 1980s, the company’s name was changed to Navistar.

Cyrus Hall McCormick was commemorated on a 3¢ stamp issued Oct. 14, 1940, in the American Inventors set of the Famous Americans series (Scott 891).