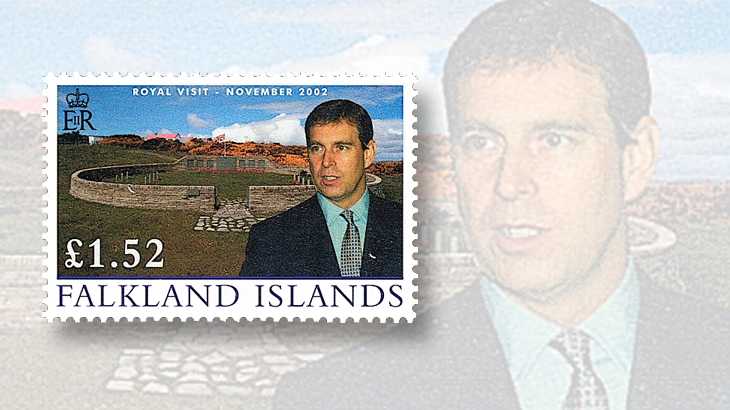 The United Kingdom's Prince Andrew, shown on a 2002 stamp commemorating his visit to the Falkland Islands.

Prince Andrew, the Duke of York, is the third child of Queen Elizabeth II of the United Kingdom and her husband, Prince Philip, the Duke of Edinburgh.

Born Andrew Albert Christian Edward on Feb. 19, 1960, he received the title Duke of York when he married Sarah Ferguson in 1986. The marriage ended in divorce 10 years later. The couple have two daughters: Princess Beatrice, born in 1988, and Princess Eugenie, born in 1990.

Prince Andrew served in the Royal Navy for 22 years. He was a helicopter pilot and instructor, and saw active duty as part of the United Kingdom’s task force in the 1982 Falkland Islands War.

The Duke of York today is involved in initiatives supporting education and economic success in the United Kingdom.

He has appeared on many stamps from around the world, including a 13-nation British Commonwealth omnibus for the Royal Wedding in 1986, and a two-stamp set from Great Britain (Scott 1154-1155) for the same occasion.

In his childhood he was shown on stamps from St. Helena and New Zealand. He has also been pictured on stamps commemorating visits to various Commonwealth nations, including a trip to the Falkland Islands in 2002 (Falkland Islands Scott 823).