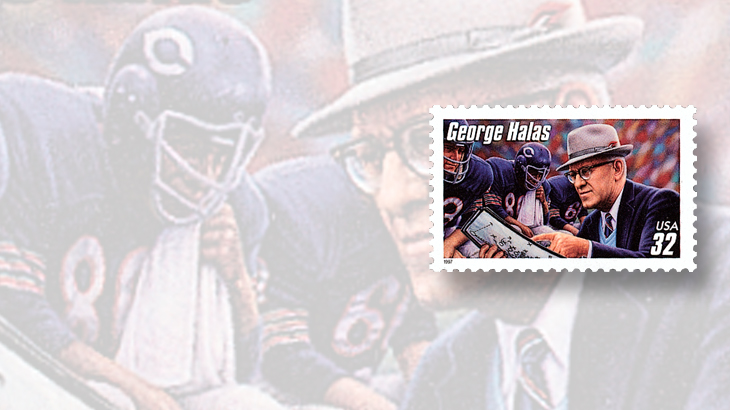 Chicago Bears player, coach and owner George Halas was honored on a 32¢ stamp in 1997.

Halas is remembered for his revival of the T formation in the 1920s, a strategy that helped the Bears achieve six National Football League titles.

Halas graduated from the University of Illinois in 1918, and after serving in the U.S. Navy, and a brief stint in baseball as a right fielder with the New York Yankees, he founded the Decatur Staleys football team, acting as player and coach for 10 seasons. The team moved to Chicago in 1921 and became the Bears the following year.

Halas was inducted in the Pro Football Hall of Fame when its first class was named in 1963. In all, Halas accumulated 321 career coaching wins, and was instrumental in organizing the NFL in 1920.

The United States Postal Service issued a 32¢ stamp for George Halas on July 25, 1997, as part of a set of four honoring legendary football coaches (Scott 3146).

When plans for the Halas stamp were announced in October 1996, then-Postmaster General Marvin Runyon said, “George Halas has a special place in the hearts of football fans across America. His contributions to the game are truly legendary, and he is most deserving of this tribute.”